The cast of NBC’s New Amsterdam, streaming now on Amazon Prime Video, reveal their hopes for their characters, potential storylines and dream guest stars in the second series.

Since ER became a mega-hit almost 25 years ago, American medical dramas have come at us like casualties in a disaster-laden mid-season cliffhanger. But New Amsterdam stood out from the crowded field to become a major hit when it launched on NBC in 2018, before premiering on Amazon Prime Video in the UK earlier this year.

With the show officially renewed by NBC for a second series, fans are speculating about what could be in store for season 2 of the hit medical drama.

Based on the real Bellevue Hospital in New York City, the oldest public hospital in America, season 1 ended on a major cliffhanger as the fate of its three major characters lay in the balance.

When does New Amsterdam season 2 air in the UK? 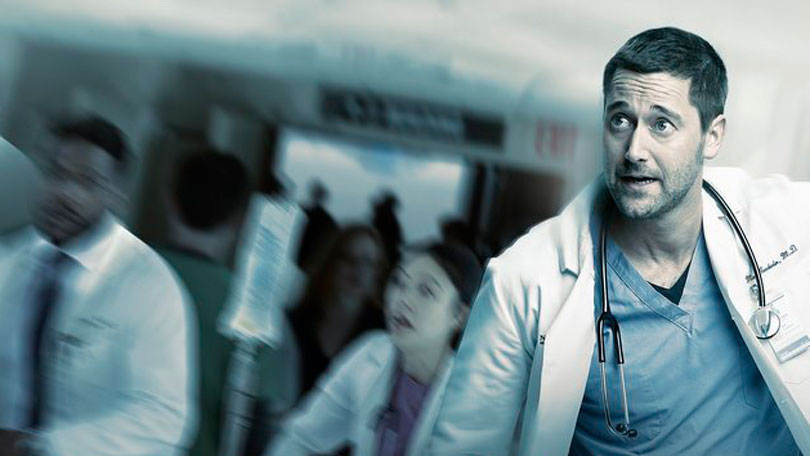 Season 1 had its world premiere on NBC in September 2018, before Amazon picked up the UK rights, premiering on Prime Video for UK viewers in February 2019.

As first reported by backstage.com, filming for season 2 took place in New York City in August 2019.

What happens in season 2 of New Amsterdam?

Season 1 ended on a huge cliffhanger, with several lives at stake. The episode featured a horrific pipe-bomb explosion, and a violent ambulance crash with the fate of some of those in the ambulance remaining uncertain.

Dr Max Goodwin (Ryan Eggold) appears to have survived the ambulance crash, escaping with his newborn baby daughter Luna in his arms, while Dr Lauren Bloom (Janet Montgomery) is shown getting CPR.

Meanwhile, Dr Helen Sharpe (Freema Agyeman) is not seen in the aftermath. Someone is shown getting covered by a white sheet, but it's unknown who that person is.

Watch that dramatic moment unfold in the New Amsterdam season 1 finale below:

Series creator David Schulner confirmed to the New York Post that fans will discover who died in the first episode of series 2, as it picks up immediately after the crash.

He explains: “We’re going to simultaneously jump forward in time and revisit the crash. And then you’ll have your answer of who died in the first episode of season 2.”

Of the plot for series 2, he continues: “Max’s battle with cancer will continue but not in the way you might think. This is a long and winding road and season 2 will be the next chapter. [Max’s cancer battle] won’t really be like anything we’ve seen this season.” 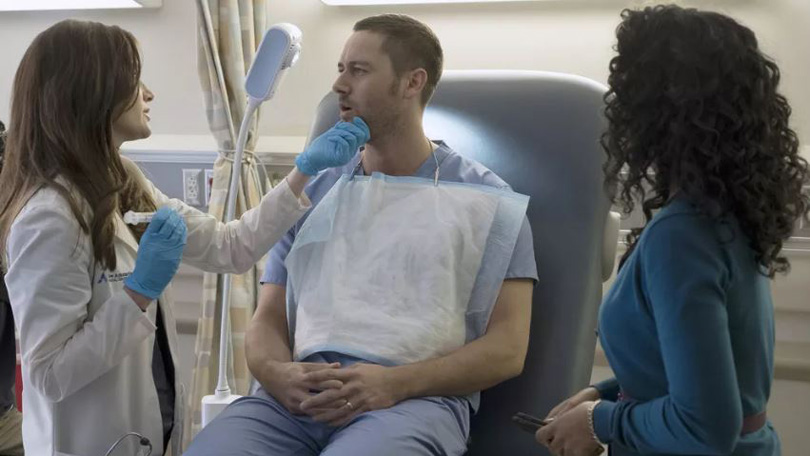 Speaking exclusively to BT TV, Eggold, Montgomery and Agyeman all hope that series 2 will continue to include patient-based storylines that reflect the health issues that people in society face in real life.

American actor Eggold - who you might also recognise from TV series The Blacklist - tells us: “We talked about possibly discussing vaccinations, which is a hot topic that people feel very strongly one way or the other on.

“[Also] abortion right now in the States, it’s psychotic what’s happening, so it would be interesting to get into that.”

This Is Us actress Montgomery - who was born in Bournemouth, England - adds: “It’s really expensive to have a baby as well, so it’s unbelievable that now the abortion laws have changed.

“Are you going to pay people to have these babies as well? Because it’s expensive, isn’t it? It’s a very odd thing that’s going on.” 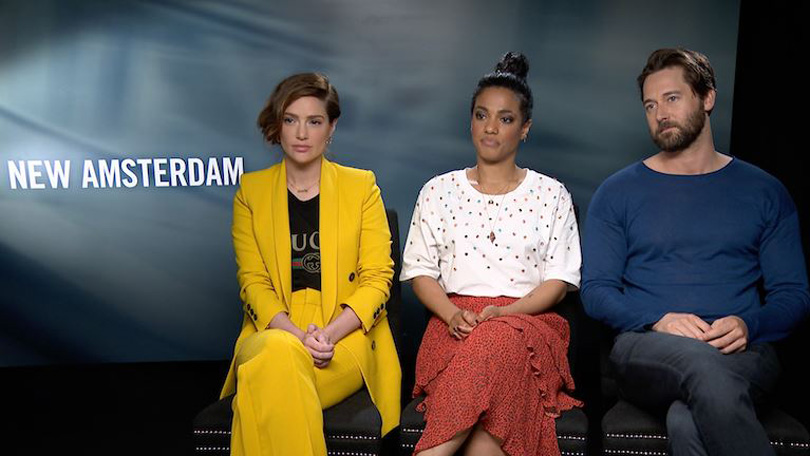 Eggold continues: “The show never wants to be overly didactic, or present a particular point of view or a political stance, too strongly… I would like to, we would like to!

“[Mental health] absolutely. It relates to so many things... homelessness.”

Fellow Brit actress Agyeman (Doctor Who, Torchwood) points out: “When people say ‘how long can a series like this go on for?’ There are endless topics of discussion. Endless!”

Who’s in the cast of New Amsterdam season 2?

The cast for New Amsterdam season 2 hasn’t yet been announced by NBC, but Ryan Eggold (Dr Max Goodwin), Janet Montgomery (Dr Lauren Bloom) and Freema Agyeman (Dr Helen Sharpe) all spoke to BT TV about what they hoped for their character, should they return for a second series.

The show's leading man Eggold says: “It would be exciting to see these characters evolve and change and contend with new things, and watch the relationships evolve.”

After her character Dr Bloom, below, fell prey to an Adderall addiction in series 1, Montgomery hopes season 2 will explore how her character manages her life post-addiction. 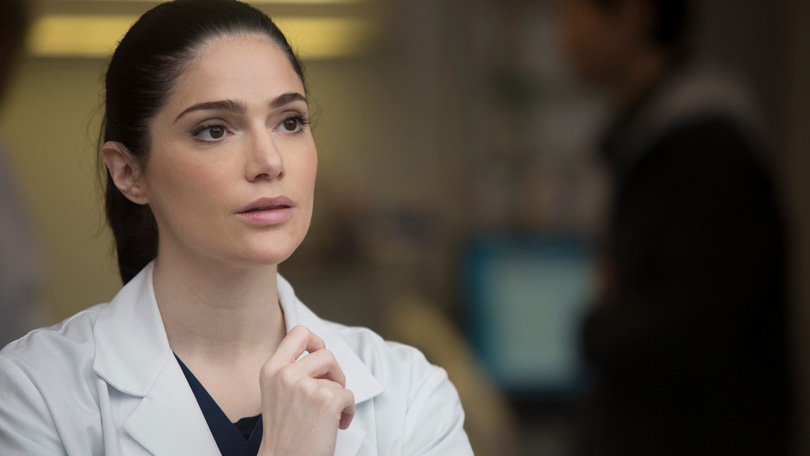 She tells us in our exclusive interview: “My character had a large arc of everything that she went through, and coming back into season 2, going through the addiction, the rehab... she only really came back in the last two episodes, and there was so much drama going on that you didn’t really explore how all of that has changed her, so I’m excited to see what the writers are going to bring forward.

“How she’s going to manage her life now, her job, if she’s still going to be the same person, or if a lot’s going to change for her.”

Agyeman, who plays Dr Sharpe, below, hopes the show explores more of her character's home life in series 2. She says: “I would like to see them at home a little bit more.

"I love that you see them in a professional capacity, but I just want to know what music they put on when they walk through the door, and what beverage they’re going to open, who’s the first person they’re going to call, do they have a dog, or a cat.” 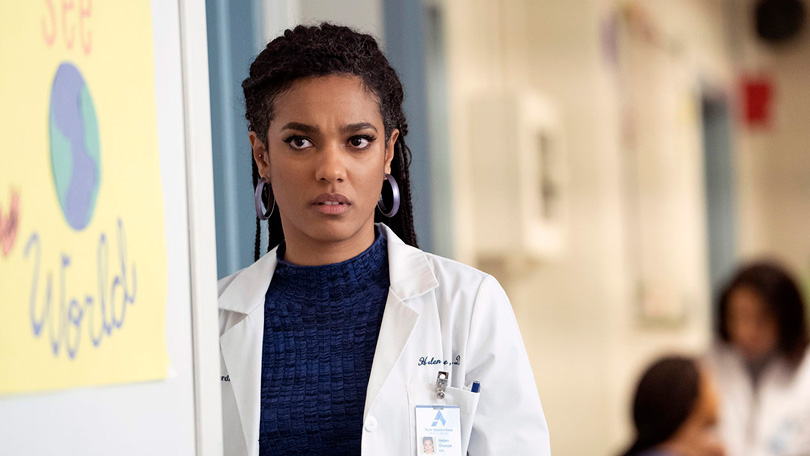 “That’s what’s lovely about a series 2,” says Eggold. “As you go on, you really get to explore bits like that - somebody’s home life, or a character you’ve spent less time with. That’s fun! Especially with an amazing ensemble, there’s so many amazing characters.”

If Freema Agyeman does return for series 2, some fans are vying for a romantic relationship between Dr Sharpe and Dr Goodwin - despite the latter being married and now, with child.

Asked what she wants to see from the pair’s relationship in series 2, Agyeman responds: "For them to just be happy!"

Eggold jokes: "[I’d like to see] just one hot sex scene really. Just one! That’s it, and there’s me done with the show!", before Montgomery jokes that they could re-name the show, "New Amsterdam: After Hours".

In terms of potential guest stars for series 2, Eggold is hoping for a cameo from Eric Manheimer - the real-life doctor whose book 'Twelve Patients: Life and Death at Bellevue Hospital' inspired the show.

Eggold tells BT TV: "We should get Eric Manheimer on the show for an episode. He wrote the book that the show is based on, and Max is based on him. Should he be a doctor or a patient? That would be genius. We should do that."

Montgomery, meanwhile, is hoping for someone a little closer to home. She's eyeing up British actress, writer and producer Phoebe Waller-Bridge (Killing Eve, Fleabag), below, to appear in New Amsterdam series 2. She tells us: "There are so many actors. I love Phoebe Waller-Bridge, I love Fleabag, it would be great if she would come do our show, for sure. Actually Kate [Dennis], who directed the [New Amsterdam] pilot, is doing a show with her right now for HBO [called 'Run'], so maybe we could actually make that happen."

Of how Waller-Bridge's character breaks the fourth wall in Fleabag, Eggold adds: "Could she be a patient that comes on and then looks at the camera and goes 'this doctor is hysterical?!'"

"We'll campaign for that!", says Agyeman.

Who’s behind the camera for New Amsterdam season 2?

It’s not yet been confirmed whether David Schulner, who headed up the show for season 1, will return for season 2, although a recent interview he gave with TVLine suggests he is.

However someone who could well be behind the camera for series 2 is Ryan Eggold, who's expressed an interest in both writing and directing future episodes, alongside his work as the lead actor on the show.

He previously wrote, produced and directed the 2017 movie, The Wedding Guest, which starred Cobie Smulders and John Cho.

"They do such a great job, so I would try to live up to what they are doing."

He also reveals to BT TV exclusively that he’s hoping to sit in the director’s chair in season 2.

Eggold tells us: "I may get the opportunity to direct an episode in season 2 which will be really exciting, because the actors and writers are incredible, the support on set, our DP [Director of Photography] Andy [Voegeli], everybody is so lovely and talented and kind, that it would just be a joy and a pleasure."

The cast tell us that the show’s supportive set encourages them to branch out from their roles in front of the camera. Alongside Eggold, Agyeman says she's tempted to do some producing work, while Montgomery wouldn’t be averse to directing some scenes.

Agyeman says: "I'd always fancied producing a little bit. That would lend itself to my skillset probably a little bit better than [directing and writing] would. [I'd be like] ‘Make stuff happen!’”

Montgomery adds: "I think I would like to direct, but my limitations about the visual [elements]... I’d be much more interested in just directing the scene with the actors, rather than knowing where to set the camera up, that would be something that I’d struggle with, but luckily we’ve got a great DP [Director of Photography]. Actually, I think directing with the actors would be my favourite part."