7 Questions with… Pennyworth’s Jessica Ellerby: 'I'd love to star in The Crown. Too much regality? Never!' - Exclusive

The Lovesick actress stars as The Queen alongside Jack Bannon, Ben Aldridge and Paloma Faith in the TV series about the origin story of Batman character Alfred Pennyworth...

Comic book fans across the pond have been glued to Pennyworth following its world premiere on Epix - and now UK fans can binge-watch it too.

Launching on STARZPLAY via Amazon Prime Video in the UK, the TV series follows the origins of Bruce Wayne’s legendary butler, Alfred Pennyworth (played by Michael Caine in the Christopher Nolan films).

Set in 1960s London, Pennyworth (played by Jack Bannon) is a former British SAS soldier who goes on to work with young billionaire Thomas Wayne (Fleabag’s Ben Aldridge) - before he becomes Bruce’s father.

Pennyworth also stars Jessica Ellerby (Lovesick) as The Queen, and she’s so excited for the show to finally launch for fans here in the UK: “It sort of didn’t feel real when it came out in the States… but seeing posters all over the tube (including my home station!) is VERY surreal.”

Speaking exclusively to BT TV, Ellerby reveals what fans can expect from the show, her thoughts on The Crown, and whether she’d ever work alongside her husband, fellow actor Nick Hendrix... 1. Pennyworth is set in an alternate reality so The Queen isn't exactly a young Queen Elizabeth, but did you do any research into the young royals for the role?

That’s right, [in the show] the whole of London is skewed - it’s not quite as we know it, and so our version of the Queen follows suit. But she’s still ‘Queen Elizabeth’ and we’re certainly meant to recognise her as such so I started by digging out photos and video clips of her as a starting point (of which there aren’t loads to be honest).

And as scripts came in and we got a bit more of a peek into her character, I thought she had a bit of Princess Margaret about her - more relaxed, and impulsive and she’s single so there’s that desire there too. So I tried to sprinkle that in.

2. Did you watch Claire Foy's portrayal of Queen Elizabeth in The Crown as inspiration?

I mean I’d watched the Crown (obviously!) but it was a long time before Pennyworth was on the scene. So I’ve seen her (incredible) performance, but I didn’t revisit it for inspiration, no. It’s her interpretation of a real person and I felt that imitating her imitation was only going to water it down. You have to do your own version of something for it to be authentic.

3. How was it wearing all the period costume and jewellery, and did you find it helped you to get into character?

Oh it was incredible. I’d go into my trailer and be like a kid at Christmas… waiting patiently for the costume department to unveil what crown (I mean how ridiculous is my life?!) I’d be wearing in that scene. And they are HEAVY, so you’re kind of forced to keep your posture in check and your head upright or you might snap your neck! So it certainly added some poise, yes! And the dresses were fantastic - having a scene written where I change into about 5 dresses was the absolute dream. They are so sumptuous so you can’t help but feel elevated. 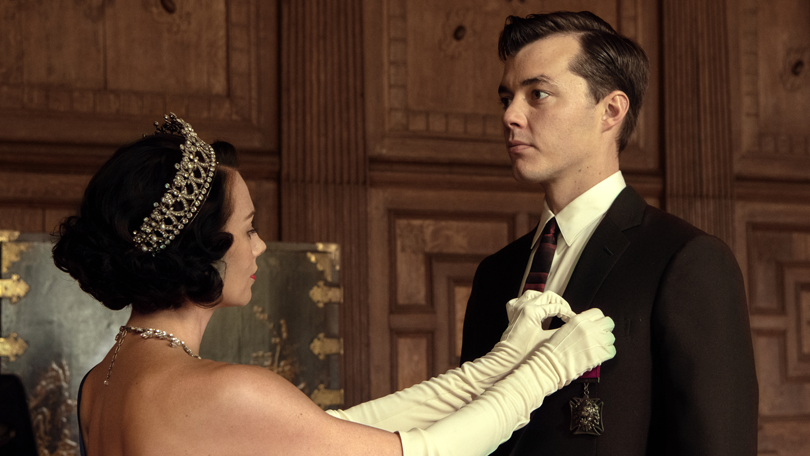 I was also struck by how oppressive all that regalia can feel though. Especially in the throne room scene in the first episode. There was always someone from costume adjusting the sash, or changing the angle of a medal because everything has to look ‘just so’. I suddenly thought ‘gosh, the getting dressed properly bit is a full time job in itself, never mind about then having to go about your duties!’

4. The show has a number of British cast members, including Ben Aldridge, Paloma Faith and Polly Walker. Had you crossed paths with any of them work-wise before?

I’d not worked with anyone before, but this business is always a bit 6 degrees of Kevin Bacon. As we started filming I was watching Line of Duty which Polly Walker - who plays Peggy in Pennyworth - is in, as well as Mum, which stars my pal Sam, but also Dorothy Atkins, who plays Mrs Pennyworth.

And obviously I watched Ben [Aldridge] in Fleabag (which I adore) and my mate Sian [Clifford] is in that. I’d met Jack [Bannon] on a night out at a mutual friends’ press night. And obviously I knew who Paloma Faith was! But I’d never worked with anyone, no.

Relaxed game of Happy Families by knife point anyone? 🔪 Catch the final episode of Pennyworth on @epix tonight. You’ll be able to binge the whole show in the UK on @starzplayuk come 25th October. How will it all play out?! . . . #pennyworthtvseries #pennyworthonepix #pennyworth #queenelizabeth2 #thequeen #betsykes #happyfamiliesgame #dccomics

5. How big a Batman fan were you before being cast e.g. had you watched the Christopher Nolan films? Who's the ultimate Batman actor in your eyes?

I remember very clearly going to the cinema with my cousins to see Batman Forever, Batman Returns and Batman and Robin. I was a kid though so I wasn’t thinking about the actors playing the roles, I was just so ensconced in the worlds and the story. So I couldn’t possibly choose!

Though I would say, you don’t have to be a Batman fan to watch Pennyworth. It will appeal to hard core fans certainly, but there’s something human and real with a hell of a lot of heart about it too.

6. You've appeared in films and TV shows across many genres - what would you like to tackle next and what TV show would you love to star in?

I don’t mind what genre, it’s about what grabs me. Something with a stong character arc, and [that's] beautifully shot. Maybe an indie film. TV shows: The Crown. Too much regality? Never.

I’m also currently obsessed with Succession. And Unforgotten (love a crime drama). And if they were still going: Big Little Lies, Fleabag, Catastrophe, and Killing Eve.

7. You're married to fellow actor Nick Hendrix. Would you ever like to work together? A cameo on Midsomer Murders perhaps?

Haha! Never say never! Yeah I think it could be fun, although there’s always that risk of working with a loved one in any profession isn’t there?! We often audition for the same stuff so I guess it’s bound to happen sooner or later…

The entire first season of Pennyworth will be available to stream on STARZPLAY, via Prime Video, from Friday, October 25.