Who is John Krasinski? 5 things you never knew about the Jack Ryan star

Find out more about the actor taking on Jack Ryan for Amazon’s new series.

John Krasinski is about to follow in the footsteps of Harrison Ford, Alec Baldwin, Ben Affleck and Chris Pine and take up the gun and badge of Tom Clancy's CIA hero Jack Ryan for a new series launching on Amazon Prime.

The actor and director has had a varied career to date – from making his name as Jim in The Office US to starring in and directing horror hit A Quiet Place – and his new role sets him yet another challenge he’s sure to smash.

[Read more: All you need to know about Jack Ryan]

Get to know John a little better ahead of the series beginning this summer.

His horror success was a huge surprise… even to himself

Most viewers will know John Krasinski as nice guy Jim in the US remake of The Office, the comedy role that made him a star.

So he was the last person you’d expect to make one of the biggest horror films of recent years when he co-wrote, directed and starred in A Quiet Place.

John explained to The Independent that it had come as a surprise to him, too.

“A friend of mine said, ‘I never pegged you to direct a horror movie’. And I said, ‘Me neither, because I couldn’t even watch horror movies'," he said.

"I’m happy that some of the freshness of the movie might just be my ignorance of the genre.”

John admitted that some of his research for directing and starring in the film consisted of taking notes while watching scary movies to log what got him on the edge of his seat.

“I wrote down when I was scared. What things really made me nervous. And so, instead of visual style, it was about when I started to get tense.”

He trained with the best

This actor’s CV boasts some seriously impressive institutions when it comes to learning from the best in the industry.

John started out at Brown University where he studied theatre arts, then graduated as a playwright and went on to study at America’s National Theater Institute.

He decided he still had plenty to learn, so came over to the UK where he studied with the Royal Shakespeare Company in Stratford-upon-Avon, then headed back to the US and enrolled for The Actors Center in New York.

He developed a thick skin about film flops

John starred in 2009’s Away We Go, a Sam Mendes-directed film which was tipped for Oscar success but which failed to live up to the hype.

He told the Huffington Post that the experience had helped him to cope with the tough industry. “All of a sudden, I started getting calls from my agents and people all around saying, ‘Holy s***, you’re going to be in an Oscar-nominated film. This is as good as it gets'. And I was young enough to go, ‘Oh my god, here we go!’," he admitted.

[Read more: Emily Blunt on why A Quiet Place was a must]

“I went with the wave, and that wave crashed real hard on the shore. I remember in my head something almost physically snapped, and I was like, ‘Probably shouldn’t do that again. As a survival thing, don’t let yourself fly that high. If it happens, awesome. If it doesn’t, don’t be crushed. Try to stay in the middle as best you can.’

“When that one had its neck broken, I was really bummed. I just promised I wouldn’t let it hit me like that anymore.”

He and Emily Blunt don’t go for celebrity baby names 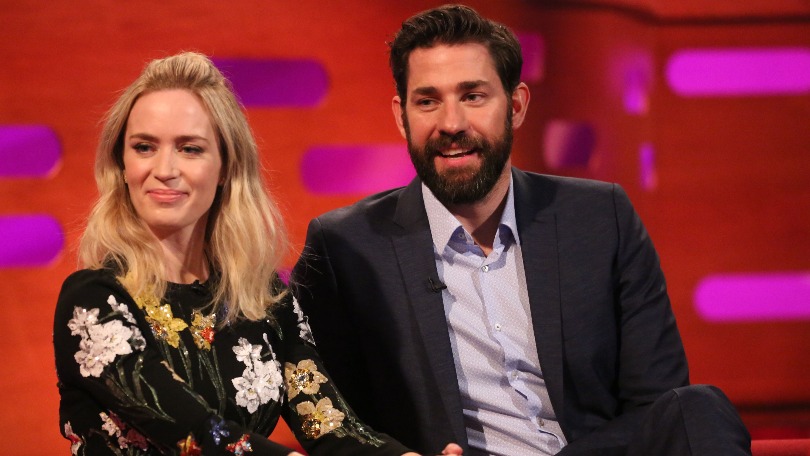 John is married to Emily Blunt, who starred in A Quiet Place with him, and the couple have two daughters together.

For the offspring of a Hollywood power couple, their girls, Hazel and Violet, have remarkably ordinary names.

John told Entertainment Tonight: “I didn’t consider any crazy baby names. We were pretty set on the two names we chose. We’re big fans of old lady names, so when we looked up both, I think the last time their names were popular was 1890. That was perfect for us; that’s what we were going for.”

He knows that Jack Ryan is a huge responsibility

We’re about to see John star as spy Jack Ryan, the main character from the Tom Clancy novels, in a new series for Amazon Prime.

The role has previously been played by Alec Baldwin, Harrison Ford, Ben Affleck and Chris Pine, and John said it was nerve-wracking to join that roll call.

[Read more: All you need to know about Sneaky Pete series 3]

He told Deadline: “There is a long line of actors who aren’t too shabby who played that role, and it makes me feel a bit terrified. But it’s a huge opportunity for me.

“I see Jack Ryan as our James Bond, but with fewer girls, and you can relate to him more. He’s a real guy.”

BT TV customers will start receiving the Amazon Prime Video app from today with rollout happening across the summer.