End of pier stunts, sizzling romance and a riptide rescue made this the most red-hot episode of Fear the Walking Dead yet.

Fear the Walking Dead's latest episode Pablo & Jessica took the survivors back to the sea. After the choppy waters of earlier episodes on the Abigail, Alicia, Madison and Strand concoted a plan to get rid of the infected by leading them into the sea.

Meanwhile, Nick intergrated even further into La Colonia, using his drug skills to increase the community's bargaining power and taking his romance with Luciana to the next level.

Here are the five key talking points from the thrilling episode: 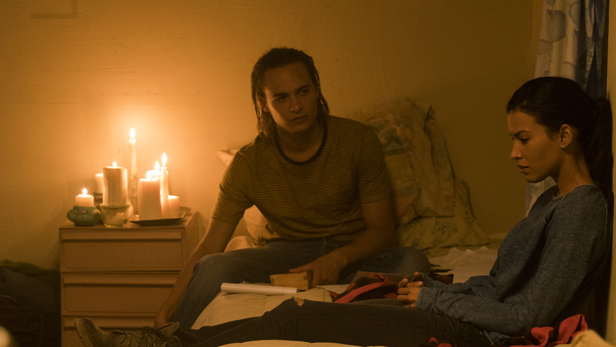 It was a great week for Nick in La Colonia. His budding romance with Luciana bubbled over into something a little more steamy and he’s also finally found a place where his drug addict past is actually an asset.

Nick turned all Walter White on us as he cooked up some watered down drugs to help keep the community fed and watered and also showed us his softer side again, playing football with the local kids.

Are Nick and Luciana going to enjoy a happy ever after in Colonia? We suspect trouble may be just around the corner. 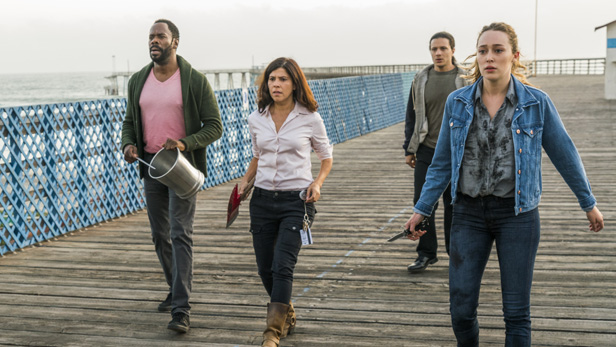 In the first half of series two Alicia was a constant problem for the survivors. Emotional and lonely, her actions frequently placed the group in danger.

Her character has rapidly grown and learned how to survive in the apocalypse in the second half of series two, proving that Nick isn’t the only member of the Clark household with the skills to survive the apocalypse.

Whether it was going room-to-room to dispense with the infected or riding out to sea in a riptide, Alicia showcased a whole new level of bravery and inner strength this week.

It also looks like the bond between mother and daughter could be healing as Madison admitted that she had neglected her daughter in the past.

3. A hotel of happiness? 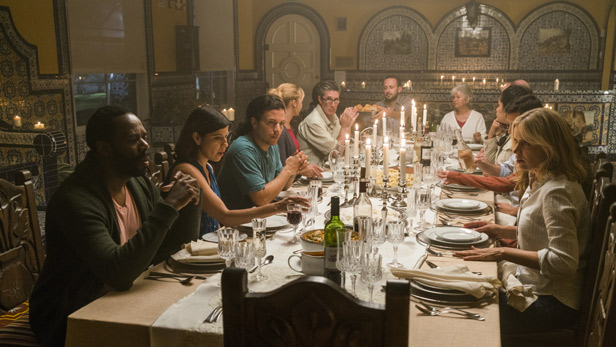 At the end of the episode, Madison and her new expanded gang of survivors enjoyed a lavish dinner at the Rosarito Beach Hotel.

As we head into the final episodes of the season, can Madison keep the group united and create a happy safe home for everyone?

Strand is already having doubts about his future and hinted that he will leave to make peace with his personal tragedy? And will Madison really stick around in a hotel room waiting in the hope that one day Nick and Travis might come knocking?

4. Do we believe Alejandro? 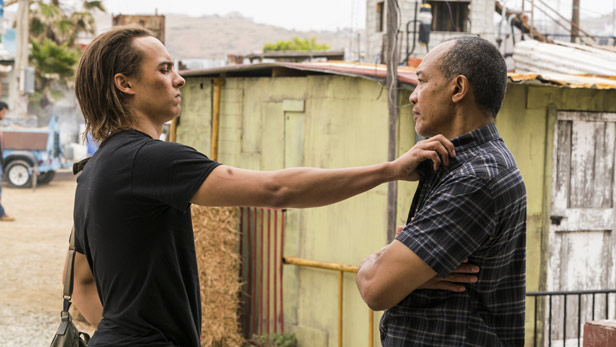 Nick was highly suspicious of Alejandro’s claims that he had survived a bite from the infected. The pharmacist spins a good tale about trying to rescue a drug addict, who was being beaten by the living, but do we actually believe a word of it?

Could Alejandro actually have been attacked by the living and be using it as a convenient way of taking control?

5. Was this the greatest stunt in Fear so far? 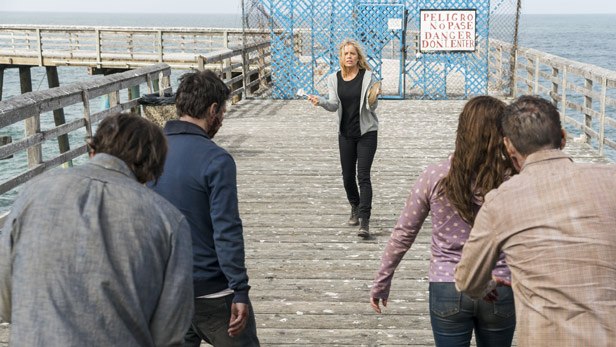 Fear the Walking Dead has had some incredible stunts in its first two seasons, but Madison, Alicia and Strand’s Pied Piper for Zombies routine is probably the most impressive set-piece so far.

Madison acted as bait as she lead all the hotel’s infected down the pier, before taking a leap of faith into the riptide where Alicia was bravely sailing a boat in strong currents.

Speaking about the stunt to Entertainment Weekly, executive producer Dave Erickson said: “It was a combination of stunts and then heavy VFX. I think we tripled or quadrupled the number of dead on the pier in post.

“And then usually when a stunt person jumps from that height they go feet first, but we had a number of stunt people who actually fell in zombie style at awkward angles and I think there were some very painful belly flops on the way down.”

Watch Fear the Walking Dead on Mondays at 9pm on AMC – exclusive to BT customers.

AMC is available on BT TV 332/381 HD and you can also watch whenever you want with Catch-Up with the BT Player.