Fear the Walking Dead: Mercedes Mason takes us behind the scenes on Ofelia's tragic death

The actress and her co-stars reveal what it was like filming the heartbreaking exit for the Salazar family.

Mercedes Mason has admitted that she shed tears during filming of her final scenes on Fear the Walking Dead.

The actress, who played Ofelia Salazar, departed the show in tragic circumstances this week as she was killed off before she could be reunited with her father Daniel Salazar (Ruben Blades).

Hit play above to watch Mercedes and the cast talking about the emotional scenes.

[Read more: Secrets from the set of Fear the Walking Dead]

[Read more: How to watch Fear the Walking Dead season 3]

Speaking on Talking Dead: Fear Edition, Mason revealed: “There was something kind of beautiful about those final moments. It was tragic. I cried when I saw it. I hope it pulled on the heartstrings for fans.”

“That day I knew I had to be emotional and not joke around. And then Ruben came out and he was sobbing, so it all just came out and I was crying on his shoulder.”

Blades revealed that they shot various different version of the final scene. 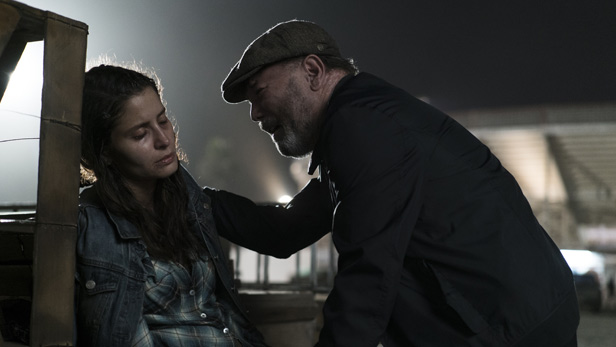 “We did several. And you never know which one they are going to use,” he said. “There were a couple where I was very emotional. And there was one where there was just Salazar knew straight away there was something wrong. In this one, he just holds her.”

Commenting about what’s next for Salazar, he teased: “He lost the two people that he cared about. But something else has happened in the process. He said, ‘this is the cost’.

“He feel more spiritual than he’s ever been. He does know now that he did not kill her. I don’t know what his reason to survive is.”
Mason’s co-stars Alycia Debnam-Carey and Kim Dickens also revealed their favourite memories of her on set.

“I think when you have Mercedes on set, you know it’s going to be a fun day. We are definitely going to miss her,” said Debnam-Carey.

Dickens said: “She’s usually a crack-up, she’s tough to get through a day with because she’s such fun. But that was a great night for all of us. I will miss Mercedes, I’ve loved that story with her family.”

Colman Domingo said: “She doesn’t take anything too seriously. In the middle of this work about death, struggle and survival, she brings some levity.”

The number 2 drama on cable in the US, Fear the Walking Dead, is executive produced by Dave Erickson, Robert Kirkman, Gale Anne Hurd, Greg Nicotero and David Alpert, and produced by AMC Studios.