The Deadwood star spills secrets about season 4 on set in Texas.

Fear the Walking Dead's fourth season will be the show's biggest transformation yet as the series takes on new showrunners, a new location, Texas, and the first ever crossover with The Walking Dead.

We caught up with the new boy on the Fear block on set in Texas to find out more... 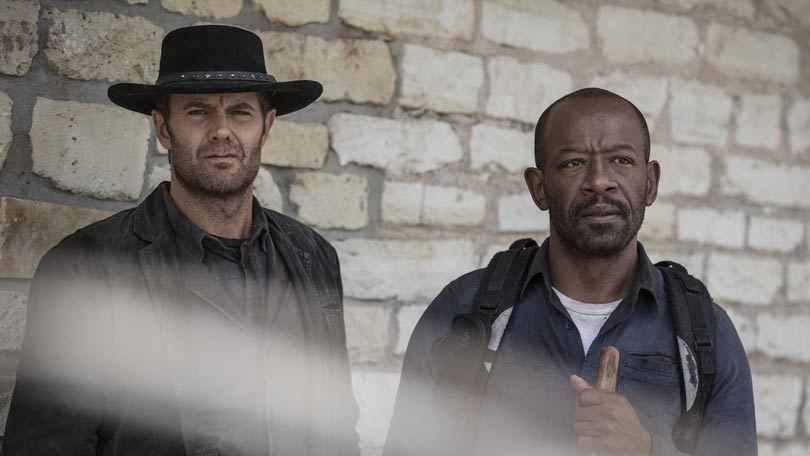 Did you have a say in choosing the hat?

Yeah, I did! My wife helped pick it out, actually. Joel came by the house with a whole bunch of ideas, we tried them all on, I wasn’t sure about this one actually but my wife said “yeah – that’s the one!”

You're used to having to pick out hats by now….

I guess so! What is it…? No Country (For Old Men), (The Assassination of) Jesse James, Deadwood – I guess I had a bowler hat in that,

How is it to join and become part of this show as 'the new boy' – and were you a fan before?

It’s not that unusual, I’ve done that a lot in my career.  I’m a fan of this universe, so I wanted to be a part of it for quite a while, but I was always busy doing something else. At one time I was doing a show called Hand of God and I bothered Scott because I heard  Negan was coming up, and I sort of lobbied for that – to no avail, I was never really close or anything, I was just messing with them really. I couldn’t have done it anyway, I was on Hand of God.

But it started a relationship. When this came up, I think he remembered me and sort of wrote it with me in mind… and it was an easy sell. 'Sounds cool!' 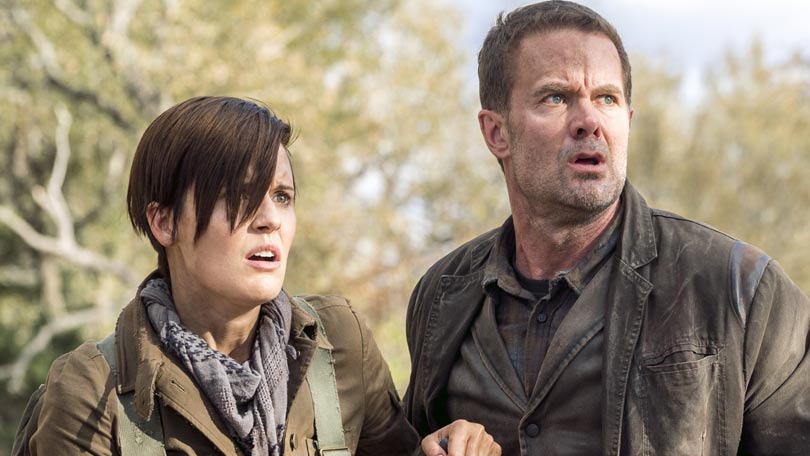 What can you tell us about the character of John?

You know about as much as I do! You clearly know he’s got cowboy tendencies. He IS a real cowboy. He likes his six guns, is good with them.  He’s looking for somebody, and I think he’s a little despondent about his chances of finding her, but he’s hopeful.  He’s a capable dude – he’s not a pushover.

I think there’s some hope in him. There’s definitely some humour. He might have the perfect psychology for this kind of disaster. Capable, and with a dose of humour."

The line "I didn’t want to kill anyone today".  Does that give us part of this guy's backstory?

I’d like to think most of us would say that line – hopefully! He does his best, I guess, not to. 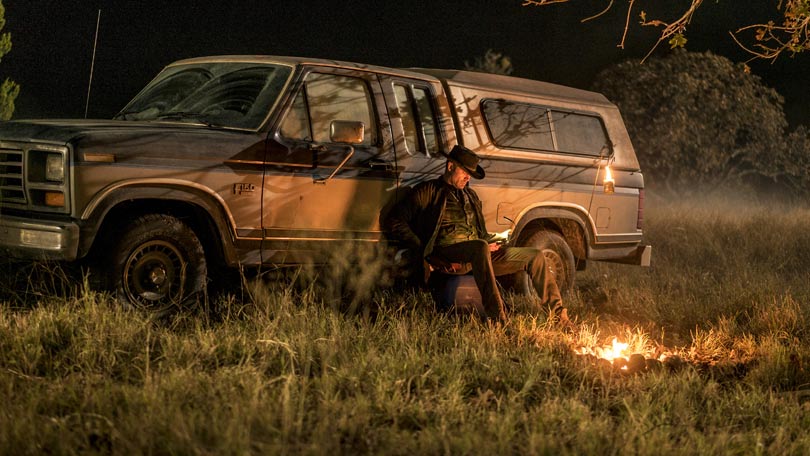 Has being on the show make you think about how you’d cope in the apocalypse?

I guess so.  I’m always attracted to those kind of stories that are like 'What would I do? Could I survive?  Would I do it?' I was in this movie called The Road, which was (adapted from) a novel by Cormac McCarthy, who’s one of my favourite authors, and it’s kind of the same thing. I know that book was spawned by… I think he’s just had a son at a late age, and there was a fire he saw coming over the hill not far from his home, and it sent him on this thing of wondering whether he’d be able to protect his son. I think all of us, at any age – I know certainly it’s a strong tendency in women, parents – there’s just a protective instinct that people have.  Could I do it?  Am I up to the task?  I think that’s the source of a lot of fear – and inspiration.

How much input into your character has Scott given you?

I do talk with Scott (Gimple, Executive Producer), and Ian (Goldberg) and Andrew (Chambliss – the new showrunners) a lot, and they’re very responsive, which I like.  Look, I would have had nothing to build off if they hadn’t written this character – I didn’t make him up.  He’s their idea, I might have been present in his mind when he wrote it. But I have a lot of ideas now, and we’re definitely learning together as this guy unfolds, and I’ve emailed them a lot and say 'what about this? I think he talks more like this, less this and more that'… you’ve got to be careful, I think, when people write Southern characters they can get real ‘stereotypey’.

You know, go to Oxford, Mississippi – drive through the town, you meet all kinds of people who believe all kinds of things – it’s kind of refreshing. So they’ve been real open to change and to detail, to little things that I would suggest as I find him out too, and that makes it even more fun.  I’m having a lot of fun on this job – more than I expected! 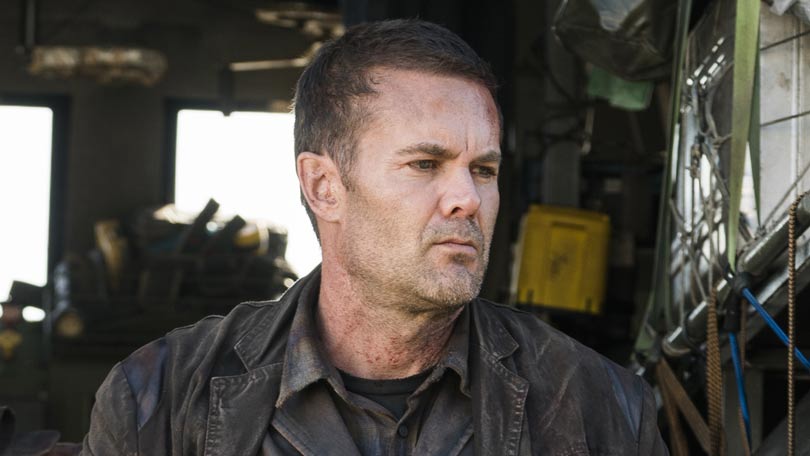 Are you interested in the public reaction to your character?

I am.  Me and Jenna (Elfman, who joins the cast as Naomi) were just talking about it.  We’ve got all this work, we’re all wondering what they’re gonna think – will they like you?  Will they welcome us? Will they have a problem with things? Let’s find out! Release it!  We’re tired of keeping secrets!

Has the show been more of a physical or technical challenge for you? Have you had more fight scenes, or had to work on your gunplay?

It’s funny, because I’ve done a lot of fight scenes in my life, and I like them – I mean. We have a great stunt team on this as a matter of fact – and it’s true, I’m not a kid any more, though I feel very capable.  And Kim had warned me – she said 'it’s the hardest job I’ve ever had', and I was like, 'really? OK!'

And then about five episodes in I took her to dinner and was like… 'this IS really hard!'  She said 'yeah, I don’t think I’ve ever recovered….' And I was like '…that’s a little different from ‘the hardest job’ – you should lead with that next time!”. Because we’re always on location, we’re out in the elements… yeah, I’ve killed a lot of walkers, fought a lot of people… it’s really fun and really challenging, but I am sore.  I’m sore right now.  Anybody want to give me a shoulder rub?

When you join a show, obviously you want your character to have an interesting story arc – but do you want to know where the arc is going, or do you enjoy the element of surprise that you don’t know until you read the scripts? 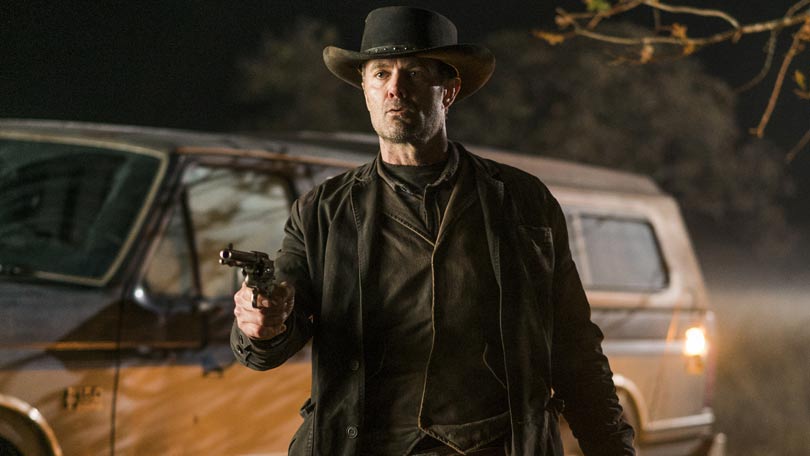 How has it been working with Kim Dickens again?

This is the kind of person Kim is: on season two of Deadwood I hang myself. I’m not in the third season: I’m one of the few (characters) that had closure on that show.  The third season, I think they were nominated for an Emmy or something.  And she called me and asked me if I would accompany her to the award ceremony, just because she thought that I would be there.  We’re obviously not romantically linked in any way, she was just reaching out to her friend to say 'you helped make us part of this thing, you should just be there'. That’s kind of amazing – not that I need to go to award ceremonies, but just that she thought to do that. So I have no problem working with Kim, anywhere, anytime, any reason – she’s a good person!

You're a fan of The Walking Dead.  Would you ever imagine John crossing over to be in that show?

Oh, yeah!  I’m hoping to be so good that that is a desired thing – by whoever.  I’m hoping they’ll ask me, 'Will you please go over and kill Negan?' And I’ll say 'sure!'  That’s not up to me, but I hear they’re a great group – Melissa (McBride, who plays Carol) came and hung out once – she’s just so sweet, I really liked her a lot.  She was fun to be with, and helpful, even as she would just watch scenes and give her two cents. I just hear great things about them.  And Lennie’s here of course, and he’s like an ambassador for the other show.  I worked with Khary (Payton, who plays Ezekiel) on Hand of God, and I think Lauren (Cohan, who plays Maggie) did a mini-project with me. So I’ve met a few, and I like ‘em. I prefer Austin to Atlanta, but that’s just me.