Where next for Victor Strand? Colman Domingo on the Fear the Walking Dead 'reboot', the evolution of Strand and a possible future Walking Dead crossover

The Victor Strand actor talks international spinoffs, his new co-stars and the many faces of Fear the Walking Dead’s most intriguing character.

Madison, Alicia and Nick may be the core family of Fear the Walking Dead, but as we head into the fourth season, Colman Domingo’s Victor Strand is very much the show’s heart.

Not only does the evolution of Strand from slick-talking businessman to practical survival-man match the evolution of the series, but he’s also established himself as a true fan favourite. Walking Dead fans often joke about the ‘riot’ that would follow killing off Norman Reedus’s Daryl Dixon, but Fear producers might face the same problem if they dared to give Strand a sticky end.

The fascination with Strand is that he’s so unlike any other character on TV. Selfish, cunning and willing to betray even his closest friends, we shouldn’t like him, but just like the Clark family, we’re drawn to him.

Ahead of Fear the Walking Dead’s highly-anticipated fourth season, we caught up with Colman on the show’s new set in Texas to find out more. 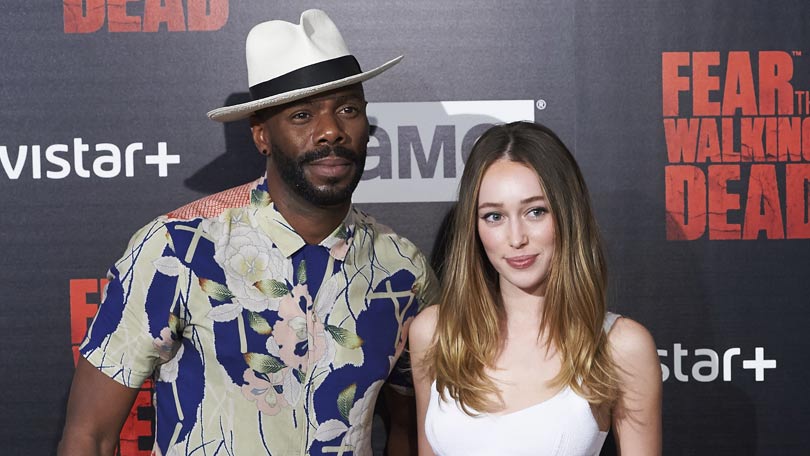 What's different from your point of view in season 4?

Everything.  It’s almost a reboot of our show, I think.  That’s the joy of our show – as you’ll remember we started out in Vancouver and LA for the first season, and then Baja in Mexico, we shot everything we possibly could shoot in Mexico, and our story had to keep moving forward and become a bit of a roadshow – because we’re still trying to find a home. Trying to find new partners, running into new people, having new situations… and it just seems to be in the nature of Fear the Walking Dead that we’ve been travelling.  If there’s a boat available, if there’s a plane, you name it – we’ll take it. We have a lot of skills now!

How has it been integrating the new cast?

They’re fantastic.  Maggie Grace, Garret Dillahunt and Jenna Elfman – and others – they’re all just a bunch of professionals, they’ve been in the industry a long time.  Garret’s someone who’s work I’ve loved, he’s just an extraordinary actor.  And they’ve folded into what we’ve been creating because they were also fans of the show.

We’re all trying to learn a new language together, because you have some of the old cast, the new cast, new crew, a new location, some new producers – you name it. So we had to lean into that, and we had a great learning curve in that way.

But even stylistically, as we’re very much shooting in the style of old spaghetti westerns – I was wondering sometimes why we were doing a big tracking shot or Steadicams, and then finally I was privy to what we were doing – I thought, ‘oh, that’s why we were a bit more stationary’/

As our show has opened up, the world has expanded, it’s become less of a microcosm of this family, so I think it’s symbolic of what the show has been doing as well. 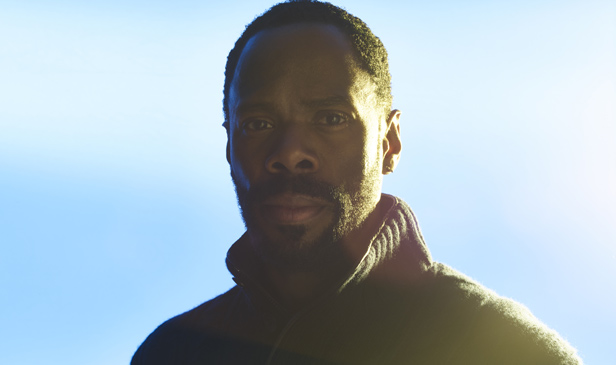 I does feel like a different show. I mean, look at the costumes of Victor Strand… I would joke constantly to Kim Dickens and to Alycia, I would say: ‘remember when I was in a Ralph Lauren suit?’ I would never have imagined I would have been in the clothes that I’ve been in since then! But Victor, and every one of our characters, had to keep transforming and keep revisiting who they are.

Yes!  Exactly…. It’s sweet but it’s prickly and it burns your eyes, but it tastes so good…

So what’s going to happen when you peel some more of it this year?

When I peel and fry this year, you’re going to find some layers of Victor Strand that you didn’t know he still had – I think it’s some of his most human, complex layers as well.  I think he’s challenged over his past and how he’s been participating in the rise and fall of some communities… and he’s trying to re-set – he’s constantly re-setting and trying to find the new landscape, to figure out how he can move forward.

He’s very much a builder, and he loves rebuilding and it’s part of his challenge.

You know, last season we caught him he was really pulling out his strings, he was out of control.  This season he’s found a bit more control, but I think he’s still in a place for a new evolution. 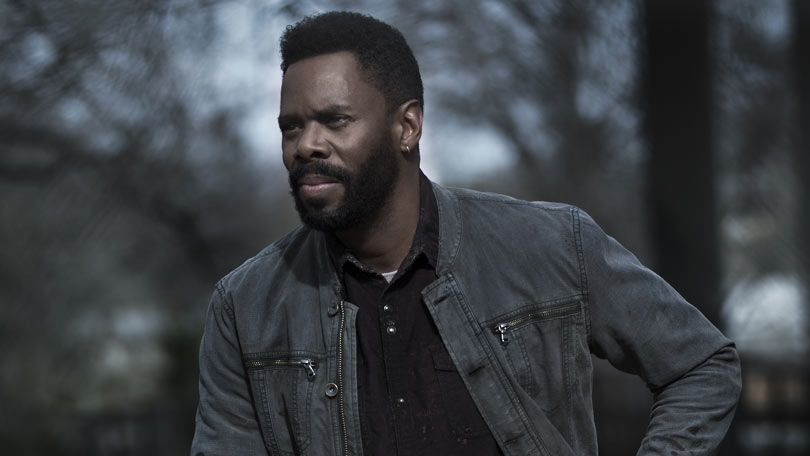 Are there trust issues?  Strand is someone I would never trust…

You would never trust Strand? Really? The strange thing is that Colman WOULD trust Victor Strand, because I think he’s someone who’s very… he can be very straight with you.  It can seem very callous as well, but you know you’re going to get the real deal when you ask from him. He may withhold some information if he doesn’t feel that you could handle it, he’s not going to give it to you – he wants you to make a strong decision that isn’t based on emotion.  I think that’s something I’ve learned about Victor Strand – that he doesn’t respond to emotion. He responds to being very practical – what should we do, what choice should we make? Not your soft, fuzzy feelings, there’s no time for that in this world – that’s why I’d trust Victor Strand.

Alycia tells us that when the new cast joined, you suggested a barbecue night…

It seems that whatever location we go to, I am the social chairman! So if we’re in Baja, of course we’re going to go somewhere for margaritas and great Mexican food. In Texas – of course, we had to go to a barbecue. I found this place called Terry Black’s, and I wanted everyone to go to it – and you guys should too if you haven’t been – and we just had a great time. You always need to go to the pub together and to eat together, you need to establish that bond – you just can’t show up and work together, we have to get to know each other and know each other’s families,

How has Victor evolved in your eyes since we first met him in season one?

When I first read Victor Strand I had an idea of what he was – that he was slick, fast talking… that opening monologue was written as if it was a Shakespearian monologue.  It told me everything I needed to know about the character. The way he spoke – the way he could decimate a grown man with his language – he was fascinating to me. I remember I even wore a shiny, electric blue Hugo Boss suit that I self-taped (my audition speech) with.

The more that he’s developed…. I had no idea that I would be on this journey, that I would be on this emotional journey with the character.  But our writers are very smart.  They get to understand the actors they’re working with, they write to your strengths, I think. If you’re physical, they write in more physical work for you. If you’re capable of having emotional depth they write that.  They source what they’ve already gleaned in some way, and they keep going more towards it.  And sometimes they challenge you with things, also, like in season three – do I speak Spanish? No. But suddenly Victor Strand was fluent and I didn’t know until two weeks before I got the script! (laughter).

What has it been like working with Lennie James?

I have been a fan of Lennie James.  I watched maybe three episodes of The Walking Dead - and it was made very clear to me NOT to watch the Walking Dead – none of us saw the show before we joined Fear. That was actually to our benefit, so that we had no ideas about what it was.  So the moment I saw walkers – I didn’t know how to kill them.

So, Lennie James… I watched three episodes, and one of them was the one where he was challenged with killing his wife who was a walker… and he was so emotional and complex, the whole episode really stayed with me.  Immediately I thought, 'Who is this actor? He’s one of the most phenomenal actors I’ve ever seen'.  And then I would meet him at Comic Cons, backstage, passing by, and he’s just such a generous spirit. He’s very kind and warm, and he brings all of that.  So we’ve got a great bonus added to our show, we’ve got someone who knows the show in such a great way and knows the genre – but he’s also still very open.

His character, his storyline was supposed to end, as it does in the comic books, so now Lennie James is a unique creation in that he gets to live in a whole different dimension.  He gets to live on in a way that’s part of our show.

Would you be keen to cross over the other way, and appear in The Walking Dead? 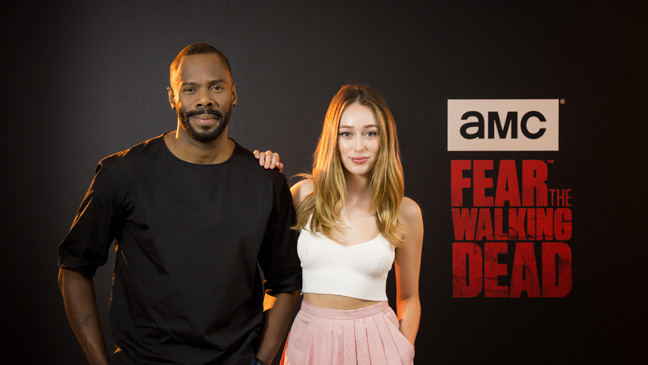 I would love to see Victor Strand pop up in The Walking Dead!  I think he’d pilot a jet to get there. I think it’d be a great challenge, and they wouldn’t know what to do with Victor Strand.

I think Victor is a character that many people haven’t come across, not only in the genre, but on television – I think so.  So I think that would be a very interesting thing.  I’m a fan of the crossover now.  At first I was a little hesitant, wondering 'what’s going to happen?  What are we doing?' But now I think it’s interesting because it keeps expanding the universe – and I look forward to it expanding even more."

To another country, maybe?

Maybe! To Russia, to Latin America, to Japan… I would like to know how other countries are dealing with the apocalypse!

Do you have nightmares about the apocalypse now?

No, not at all.  I just look at the walkers and go, 'oh that’s John, in his make-up'…. I saw a walker just walking by, and it was the funniest thing – because she was walking by in full make-up…and she was carrying her iPhone charger!

I’d just been dragging her around in a scene, and now she’s like, 'I gotta plug in my iPhone…' so you always remember 'that’s Marsha'.