GLOW season 3 on Netflix: From release date to 1980s true story - Everything you need to know as the Gorgeous Ladies of Wrestling head to Las Vegas

Alison Brie, Kate Nash, Betty Gilpin and more return to their roles as the female wrestlers, as GLOW heads to Sin City for series 3 of the Emmy-winning hit - now streaming on Netflix.

The Gorgeous Ladies of Wrestling are gearing up for round three in the ring.

GLOW heads to Sin City for season 3, with the wrestlers relocating to Sin City to film a live show after their TV show was canned in season 2.

Here, we reveal everything we know about GLOW season 3 so far - including the release date, who’s joining the cast, and the true story behind that move to Vegas…

If you’ve got BT TV, you can add Netflix as part of your BT subscription and watch it through your BT TV box.

When is GLOW season 3 on Netflix?

All 10 episodes of GLOW season 3 are streaming on Netflix now.

What are the critics saying about season 3?

The Independent calls GLOW season 3 its 'brightest and best yet', giving it four out of five stars, while The Guardian describes it as 'gleeful and outrageous', also giving it four stars.

Across the pond, The Hollywood Reporter says the show is in 'tip-top shape', calling the move to Las Vegas 'refreshing', while Vulture reckons the show 'goes deeper and gets even better in season three.'

If you're not watching @GlowNetflix season 3 this weekend, what even are you doing with your life? #glow #Netflix pic.twitter.com/k21sttBxiw

Who's in the cast of GLOW season 3? Who's joining the cast?

Rebekka Johnson is back as Dawn Rivecca, next to Kimmy Gatewood as Stacey Beswick AKA Edna and Ethel Rosenblatt: The Beatdown Biddies, along with Sunita Mani as Arthie Premkumar / Beirut the Mad Bomber, Marianna Palka as Reggie Walsh / Vicky the Viking, and Ellen Wong as Jenny Chey / Fortune Cookie

According to Deadline, the Oscar winner will play Sandy Devereaux St. Clair, the entertainment director of Las Vegas’ Fan-Tan Hotel and Casino.

Another actor joining the show for season 3 is Breeda Wool (Mr Mercedes, UnREAL). She will play a character called Denise, a former Showgirl who’s desperate to stretch out her career on the stage and provide for her young daughter.

[What to watch on Netflix this month]

Who’s behind the camera?

Created by Liz Flahive and Carly Mensch (Nurse Jackie, Orange Is the New Black), the female-fronted wrestling show has a largely female production crew behind the camera too.

Confirmed directing credits for season 3 include Lynn Shelton, Claire Scanlon and even Alison Brie, below in character as Zoya the Destroya. 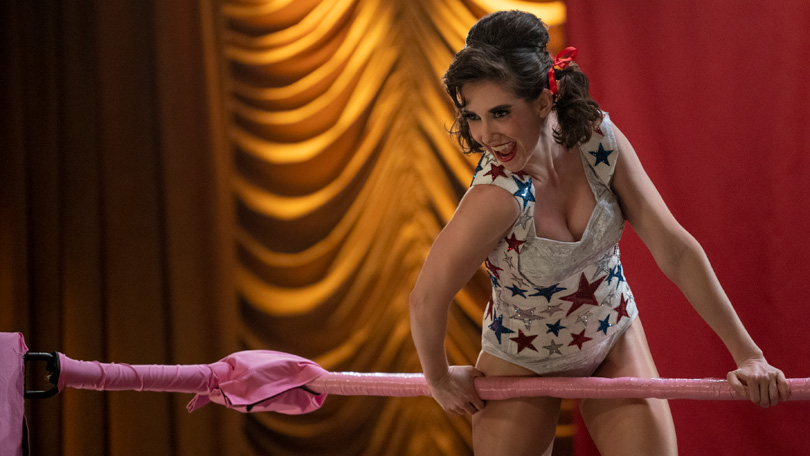 Speaking to The Hollywood Reporter, British actress Kate Nash said she finds it "comforting" having an all-female crew on GLOW in the wake of the #MeToo and Time's Up movements.

She said: "I think it's important to Liz and Carly to create an atmosphere where we're all feeling comfortable and safe when we're doing a lot of risky things in hardly any clothes and it's really comforting having so many women on set, it just feels safe.

“I think our set is like a very warm cool set and everyone is really encouraging of us - men and women."

Despite season 3 being set in Las Vegas, the series was actually filmed in Los Angeles. Cast member Alison Brie confirmed filming wrapped up in March 2019.

Last official day shooting Season 3 of GLOW!! I CANNOT WAIT for you guys to see it. *we don’t know yet what day it will come out - but I really think you’ll love it. ❤️ #zoyathedestroya #glownetflix

Is GLOW season 3 based on a true story? Did they really go to Vegas?

As fans of the show will know, the Netflix show is based on the real-life Gorgeous Ladies of Wrestling, a women's wrestling team who starred in a cable TV show called GLOW in the late 1980s.

Take yourself back in time with the real-life GLOW pilot from 1985 below:

But while the Netflix show is set in and around Los Angeles, the real-life wrestling team actually filmed the show in the entertainment capital of the world - Las Vegas, Nevada.

As Bustle reports, Meshulam Riklis was the main financial backer of the original GLOW, and when the show premiered in 1986, he owned the Riviera Hotel and Casino on the Vegas Strip (below before it was demolished). 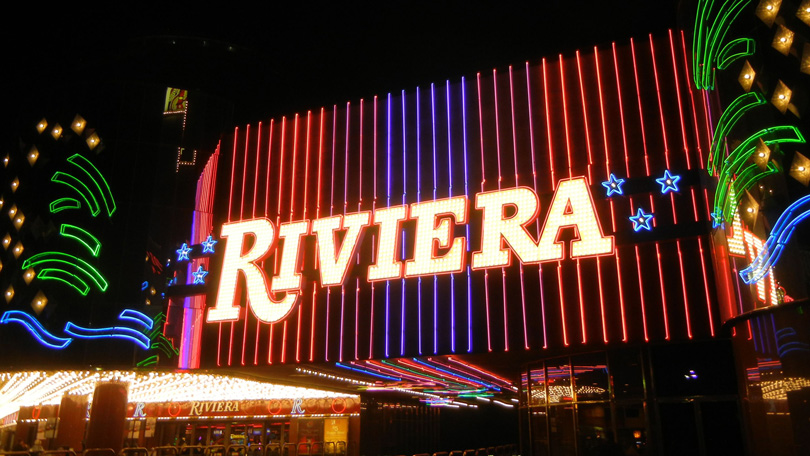 The producers took a stage at the hotel and turned it into sound stage for the TV show, which they sold to 200 markets.

As the Daily Beast points out, the Riviera was an iconic Vegas hotel in the '50s and '60s. Joan Crawford hosted the hotel's opening in 1955, and Rat Pack members Frank Sinatra, Dean Martin, and Sammy Davis Jr. used to perform there.

The Netflix documentary GLOW: The Story of the Gorgeous Ladies of Wrestling reveals that the female wrestlers were actually encouraged to get rid of their apartments and move into the hotel. 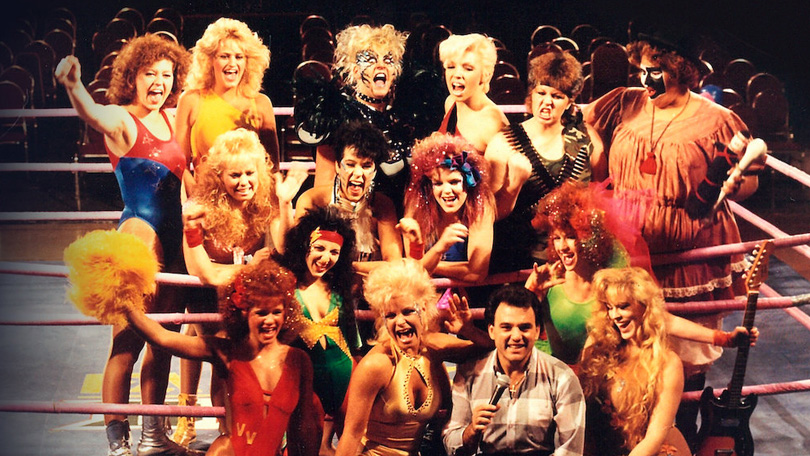 Cindy Ferda (real life wrestler Americana) explained: "It all just happened so quickly at that point. And before I knew it, I was packing my bags in L.A. and moving out to Las Vegas to the Riviera Hotel.”

Once the women started living at the hotel, they were subjected to strict curfews - no late night parties! - and rules about what they could and couldn’t do.

The wrestlers who participated in the documentary said their lives in the hotel were ‘surreal’ and made it feel like they didn’t have a life outside of GLOW.

Real-life GLOW wrestler Dawn Maestas (whose character was Godiva, below) confessed: "We would sneak out all the time. I was in my 20s and a little bit rebellious and ended up getting fined a lot for breaking curfew."

Bow down to this hair. #familyfeud #glow #godiva

A few weeks later, the girls moved into apartments down the road from the hotel - but they were still subject to the rules and regulations.

One such rule was that they had to be constantly in character, even when they went out for lunch or dinner.

Plus, the show was split into ‘good girls’ and ‘bad girls’ - which continued off-screen. The ‘good girls’ weren’t allowed to socialise with the ‘bad girls’, and visa versa, because they were enemies in the ring and the producers wanted to maintain this illusion.

They were even fined if they socialised with the wrong group.

So if anything, season 3 of GLOW is closest to its real-life wrestling roots than its predecessors.

What happens in season 3?

The plot for season 3 is being kept firmly under wraps, but we do some story details already.

The official show synopsis from Netflix reads as follows: “Ever the team cheerleader, Ruth's (Brie) passion for the show begins to take a backseat to her growingly complicated personal life. Debbie (Gilpin) is making headway as a producer, but continues to be consumed with guilt over the distance from her son. And as their residency wears on, the lines blur between performance and reality, as the women find themselves struggling with their own identities.”

So what else do we know? Firstly, we know that the team have relocated to Las Vegas to perform a live wrestling show for fans, rather than a TV show as they couldn’t sell the rights to it.

In terms of relationships, we know that Ruth (Alison Brie) is still with Russell (Victor Quinaz), who she started dating in series 2. It also looks like she’s on good terms with Sam (Marc Maron) after rejecting his advances. 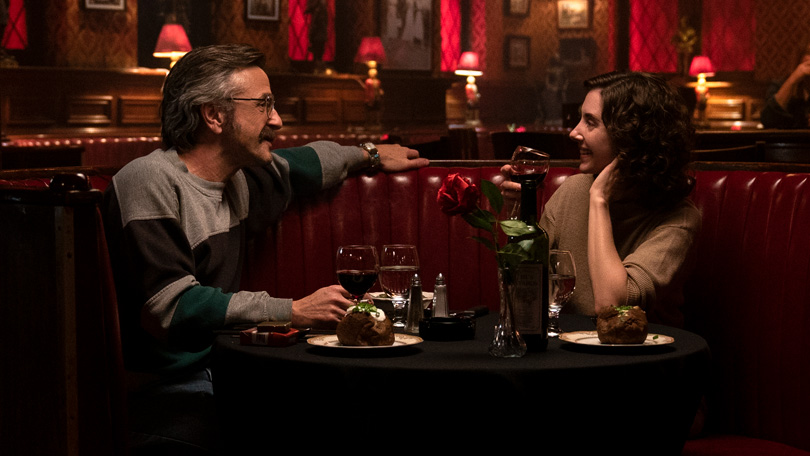 After a massive blowout with Debbie (Betty Gilpin) in series 2, the pair are seen going on a hike in the trailer - but Ruth says she still feels “lost”. Will their complex friendship ever be mended?

Then, there’s Bash (Chris Lowell) and Britannica (Kate Nash), who married in the season 2 finale to prevent her being deported.

This is despite Bash hiding his own sexuality from the rest of the group, after his butler – and potential love interest – died from an AIDs-related illness in season 2.

Speaking to Digital Spy last year, Kate said: "It will be interesting to see what happens when she finds out about Bash's sexuality.

"His butler, his best friend, died of AIDS, it's a very sensitive subject that I think he hasn't really acknowledged."

And after following Yolanda (Shakira Barrera) to the strip club in season 2, Arthie (Sunita Mani) shares a kiss in the series 3 trailer - suggesting their relationship is still very much on the cards.

Is there a trailer for season 3?

There is! You can watch the official trailer for season 3 in full below:

Will there be a season 4?

A fourth season of GLOW hasn't been announced, but the cast and crew are certainly hoping for more seasons to tell their stories in greater detail.

"Give me six seasons and I would be happy. We’ve done two, give me at least four more and I’d be a happy girl!" Brie (Ruth) tells The Hollywood Reporter. While Gilpin (Debbie, below) echoes, "I would do this show forever." 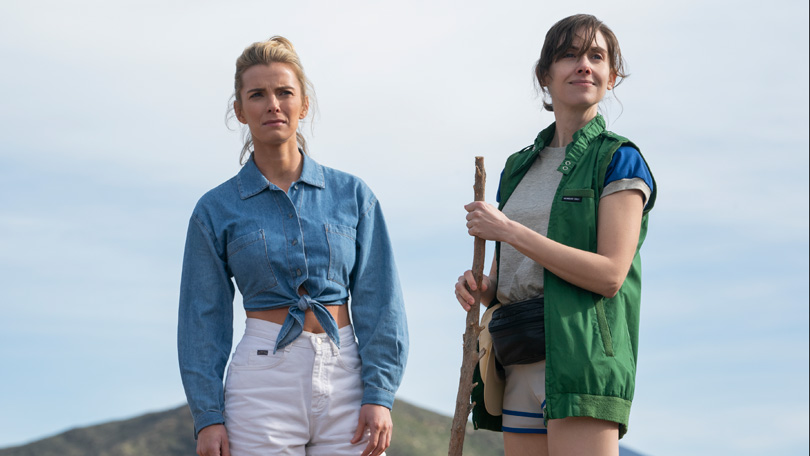 Series creator Liz Flahive says: "I hope we have the number of seasons we dream of having because I think we can then equally explore all of the women.

"Both the blessing and the challenge of the GLOW symphony is that there are a lot of them. We are a half hour-ish show, which I love. But it also means we’re going to lean into people when it’s the right time for that character.

“With season one, we really had the structure of what we needed to accomplish and, frankly, that didn’t allow us freedom to have an episode like the fourth of season two, where we basically follow two characters [Tamme and Debbie] and bring them back to the show."