From the start date on SyFy UK to who’s in the cast, we reveal everything you need to know about Project Blue Book, and Aidan Gillen says why you should tune in.

Looking for something to fill that big X-Files and Roswell-shaped hole in your life?

Project Blue Book is coming soon to SyFy on BT TV, and it’s based on the true story of UFO investigations in the United States in the 1950s and 1960s.

Here's everything you need to know about Project Blue Book, including Gillen’s top three reasons to watch…

SyFy is one of the extra entertainment channels available for BT TV customers, part of the BT Entertainment Starter Pack. You can watch on BT channel number 319/375 HD.

When is Project Blue Book on TV?

Set your dials, UK...we’re gunnin’ for ya! #ProjectBlueBook premieres on March 27th at 9pm on @SyfyUK // Photo taken outside of Southwark Station in London #watchtheskies pic.twitter.com/EaMED3X380

There are 10 episodes of 60 minutes each, so the final episode should air on Wednesday, May 29.

A second series of Project Blue Book has been commissioned, consisting of another 10 episodes, according to Deadline.com. A release date for series 2 has not been confirmed, but Aidan Gillen told BT TV exclusively that they start shooting in June 2019.

Set after WWII, just as Cold War paranoia spreads among the US population, Project Blue Book is based on the US government's real life project of the same name.

Dr Allen Hynek (Aidan Gillen) and Captain Michael Quinn (Michael Malarkey) are tasked by the US Air Force to investigate reports of UFOs - to debunk them, or at least come up with rational explanations for them.

While Quinn, a smooth and tough military type, doesn't care about anything other than doing the job he was given, at first, the more sceptical Hynek quickly becomes convinced that some kind of conspiracy is going on.

Asked to describe his time on the show in three words, Aidan tells BT TV that Project Blue Book was “intensive, enjoyable, and intriguing”.

The Irish actor (Game of Thrones, Peaky Blinders) plays the real-life university professor recruited by the Air Force to spearhead research into UFO’s.

According to Heavy.com, his Air Force research projects remain some of the most cited amongst those who study the mysteries of the skies.

The Vampire Diaries actor plays the decorated WWII Air Force pilot who is tasked with running Project Blue Book. Captain Quinn’s character is a result of combining Air Force pilots who were directly involved with the project into one character.

Captain Quinn advises you to tune in for the premiere episode of #ProjectBlueBook THIS TUESDAY, Jan 8th at 10/9c on @history. You can also purchase a series pass on @itunes // This is a trailer shot from when we were shooting Episode 1 in Vancouver. Looking forward to sharing more old photos as the episodes air. Watch the skies...

The Canadian actress (The Man in the High Castle, Van Helsing) plays Dr Hynek’s wife Mimi - another real character - who forms a deep and dedicated friendship with a mysterious woman named Susie, played by Ksenia Solo. 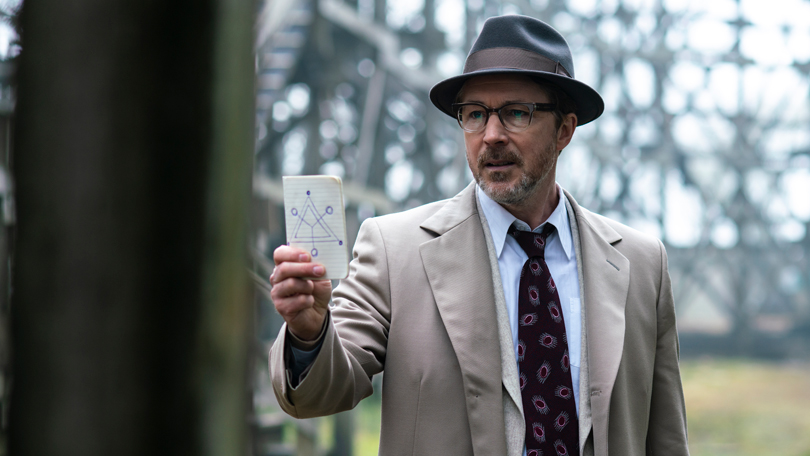 1. It’s based on real events

“Because of the kind of show it is, it looks like a sci-fi show, but in fact it’s sci-fact, and that’s unique I think.

“They’ve given it that sheen of a drama, or of a science fiction fantasy, but every story in this is based on something that actually happened.

“The reports, this is what people have seen, or said they’ve seen, quite convincingly, so that sets it apart a little.”

“The effects in it, which aren’t overdone, are quite beautiful. There’s some great aerial scenes towards the end of the season.

“There’s an episode with the most intriguing, fascinating UFO sightings in history, because it’s very believable. It was over Washington, D.C. in 1952, where planes go up to intercept or investigate these objects. It’s quite beautiful.

“I use the term flying saucers lightly. [TV shows about UFOs] come and go don’t they? Like westerns.

“[I don’t know] if it’s the start of a new phase [in TV]. Fargo had a flying saucer show up in quite a pivotal moment... I was pleased to see it though, because I’ve had a fascination with that imagery myself since I was a kid.

“So whether it’s a start of a craze or trend or not, I wouldn’t know.”

By the way, X-Files fans - the house at the beginning of the second episode of Project Blue Book, where the mother and children who witnessed the alien crash live, is the same house that is used for filming The X-Files (Mulder's House), according to IMDB.

The X-Files, Roswell, The 4400, The Americans, Fringe, Stranger Things, Supernatural.

SyFy is one of the extra entertainment channels available for BT TV customers.