The cast of Amazon’s big budget fantasy noir TV series Carnival Row reveal what went on behind-the-scenes of filming in Prague, as the show premieres exclusively on Prime Video.

Hit Play below to watch Cara Delevingne, Orlando Bloom and other cast members reveal their secrets from the set of Carnival Row...

A whopping 17 years in the making - Travis Beacham penned the script in the early 2000s - Carnival Row is filled with mythological immigrant creatures whose homelands were invaded by the empires of man.

But what went on behind the scenes of filming for the show? A-list actors Cara Delevingne and Orlando Bloom are more accustomed to Hollywood movie sets, after all.

From Delevinge’s tea runs to Bloom’s dog Mighty being the most popular pup in Prague, the stars spilled the Secrets From the Set in a BT TV exclusive interview at the London premiere of the show...

BT TV customers can watch Carnival Row via the Prime Video app under Players & Apps on your BT TV box.

Prague was beautiful, but 'painfully cold' Much of filming for Carnival Row season 1 took place on location in the Czech capital for six months over the winter of 2017/18.

And according to The Prague Reporter, it's one of the most expensive projects to ever shoot in the country, spending roughly $75 million while in Prague.

But while many scenes took place at the Barrandov Studios, production also took place at locations around the city, with the cast completely exposed to the elements in the depths of winter.

As the cast shot their scenes, temperatures dropped as low as -5°C/20°F to -10°C/10°F in January and February, according to MyCzechRepublic.

During filming, Bloom - whose character in the series is a human detective called Rycroft 'Philo' Philostrate - shared a video on his Instagram that showed the raindrops turning into icicles because it was so cold in the city.

Speaking to BT TV about filming in Prague, the British actor - known for playing Legolas in the blockbuster Lord of the Rings films - told us “Prague was very cold, very painfully cold… beautiful, perfect for the show.

“The snow when you see it on screen is real, the freezing, toe-curling raindrops are real, and that all lent really well to the tone and look of the show as a whole.”

Delevinge - who plays refugee faerie Vignette Stonemoss, and who you might recognise from films including Paper Towns and Pan - told BT TV: “Filming was challenging, but it made the whole dire experience of the show and what it’s about much more dire.

“I think it gave it that critical need of raw pain and angst, and also it probably helped in getting the shots quickly because we were like ‘let’s just get out of here, it’s -10 degrees!”

Actress Karla Crome, who plays another faerie, Tourmaline Larou, told us that the architecture of the European city fed into the fantastical world of Carnival Row. She explained: “Prague has that sort of Victorian look, it’s got Charles Bridge with some amazing statues on it, so it really helped to get into that world.”

Caroline Ford, who plays a clever and mysterious young noblewoman named Sophie Longerbane, agreed that the Czech city was the perfect replica for the fictional Carnival Row. She told us: “Prague is amazing. It’s a very magical city, so it felt very fitting, as it felt like you were in a fairytale land filming this fairytale story.

“The minus-12 degrees is less fun. We were wearing five layers of thermals and had heaters. It’s when your corset comes in handy [as it keeps the heat in]!”

Mighty the labradoodle was the ‘mascot of the show’ Fans familiar with Orlando Bloom’s social media musings will know that he frequently shares loving photos of his adorable labradoodle Mighty, above, with his 2.7 million followers.

The teddy-bear lookalike turned out to be one of the most popular members of the Carnival Row set, as Bloom brought him along to work with him every day, uprooting the pup from his home in LA - where Bloom resides with his fiancée, singer Katy Perry - to Eastern Europe for the winter shoot.

Delevingne told BT TV: “He really was [the highlight from filming]. Every time I walked into that tent, I knew mighty would be there waiting for Orlando.

“He was like his ultimate protector. I don’t know who’s the owner and who’s the dog though sometimes. Mighty’s pretty feisty I must say! He is called Mighty!”

Crome agreed: “I think Orlando’s dog Mighty is more of a legend in Prague and across the European continent than Orlando is. Everybody knows about him!"

Speaking about the love for his dog on set, Bloom told BT TV exclusively: “He’s really special. He’s a world traveller, he’s the mascot of the show, and he’s the tiniest dog with the biggest heart, he’s a sweet one.

Period costumes: Not as glamorous as they look... 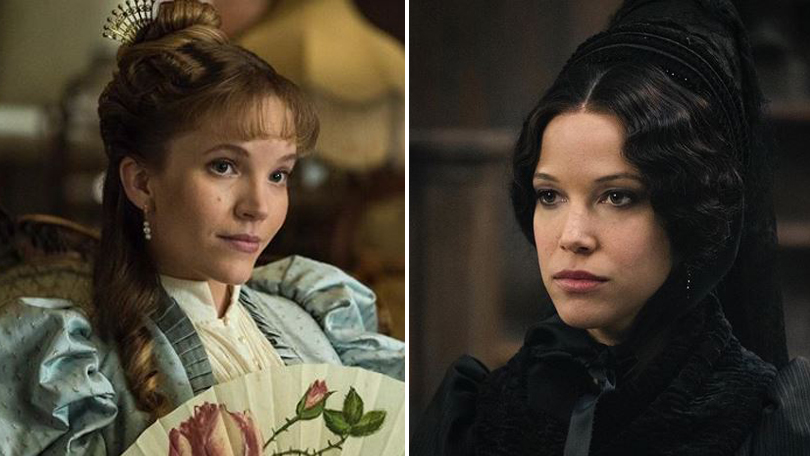 One such cast member was Tamzin Merchant, who plays Imogen Spurnrose, above left. Her character is a spoiled heiress whose Delevingne's character Vignette is a housemaid for.

Merchant is used to wearing period costumes thanks to roles in TV shows including The Tudors, and Salem, but while costumes like corsetry might help cast members get into character, they’re often not comfortable to wear - at all.

She tells us: “I’m kind of used to wearing period costumes, but wearing a corset is a f***ing chore, because you can’t breathe and you can’t take a full breath.

“You can’t have an argument with anyone in a scene, it’s hard, so you have to make it work with the acting. It’s definitely an insight into how women have been oppressed for centuries, so that was helpful.”

Caroline Ford (Sophie Longerbane, above right) has worn period costumes in series such as Once Upon A Time, and agreed in this instance it can make the job more challenging.

She told us: “It’s hard to breathe in the corsets, that’s the only thing. I’ve always wanted to wear a corset, then I wore one, and I was like ‘maybe I don’t want to wear a corset any more!’

“They are amazing and they make you stand amazingly, but it makes it hard to eat, you [have to] eat little baby snacks.” 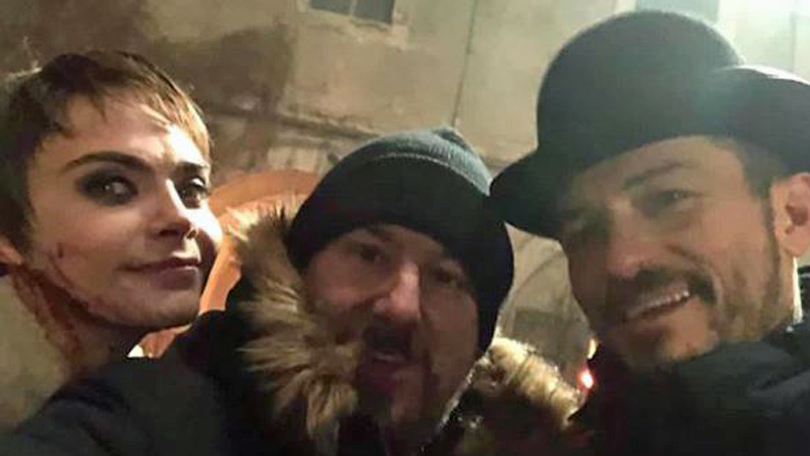 But despite what must have been a pretty relentless shooting schedule for all involved, including the show's two leading actors more accustomed to Hollywood movie sets - it sounds as though they were pretty fun to be around.

Crome - who you might recognise from Channel 4’s Misfits - said of working with the pair: “They’re great. It’s funny, when you end up going in for a day of work with people as famous as they are, it weirdly becomes the norm, but they’re great people, they’re really easy to get along with, we had a great time.”

Ford agrees: “They were wonderful, they were so welcoming and friendly. They created a very nice atmosphere on set.”

Merchant called out a highlight as getting to boss Delevingne around on set, as her character was the boss of Delevingne's, although off-camera is sounds as though Delevingne might need a little help with her tea runs...

Merchant told BT TV: “I had lots of scenes where I got to boss Cara around, so that was fun. It was very fun ordering Cara to make me a cup of tea - you don’t get to do that everyday! She made a great cup of tea when I gave her instructions and she followed them to the letter. She learned!”

Cara’s life in the hands of the stunt men 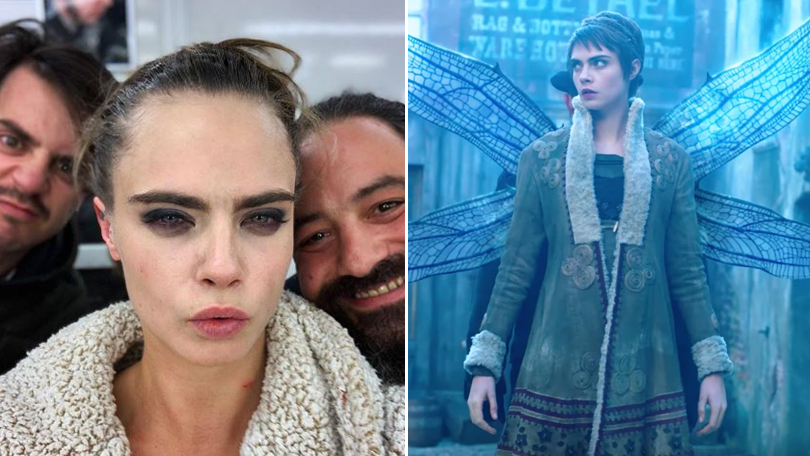 When you’ve got a show like Carnival Row with lots of faeries, there’s going to be lots of flying - or attempting to fly. How else are the faeries supposed to travel between places - walk?

This meant Delevingne had a lot of stunt work to make her flying look realstic. Speaking to Edith Bowman at a Q&A at the Carnival Row premiere in London, Delevingne said: “I tried to do my all my own stunts - I definitely couldn't.

“You should see my stunt women do them because I'm not good at it. But when I fall down on that ship, that was 100 percent real, when I fall over most of the time that was just me hurting myself.”

Bloom jumped in: “I think when you jumped onto the bed on top of me a couple of times there were a couple of close misses.”

She responded: “I'm not controlling the wires all right. It's not my fault. It was two men always constantly standing there going like 'Oh my God are we gonna drop her?'

“Literally the worst thing was, I don't think I actually met those men until the last day. I've put my life in your hands and I don't know your name. They must think I am such a horrible person, but thank you for being so careful with my life.”