As Christopher Robin - now a workaholic grown-up - hits the BT TV Film Store, we reveal the best bits about the movie, fascinating facts, who’s in the cast, and what to watch next.

Christopher Robin, the live-action update of the Winnie-the-Pooh story, is the perfect family film for adults and children alike to watch this winter.

The title character, played by Ewan McGregor, is all grown up and working in London. Sadly, this middle-aged workaholic has forgotten all about his childhood in the Hundred Acre Wood and, with it, his animal friends.

Christopher has completely lost his sense of imagination, until he suddenly meets his old friend Pooh Bear, who helps him to rediscover the joys of life as the pair go searching for Pooh’s lost friends Eeyore, Tigger and Piglet.

Here, we reveal the best bits about Christopher Robin, fascinating facts about the film, who’s in the cast, and what to watch next.

Jim Cummings, who has voiced Pooh and Tigger since the late 1980s, reprises his voice roles to bring an element of nostalgic magic to the film.

Pooh and Tigger’s humour appeals to both children and adults, with Pooh’s philosophical one-liners making you want to pick him up and take him home with you.

Some of our favourites include “People say nothing is impossible, but I do nothing every day”, “I always get to where I'm going by walking away from where I've been” and “There's always time for a smackeral of wonder”.

2. It's a new spin on the childhood tale

The film’s storyline revolves largely around the concept of Christopher Robin, now an adult, rediscovering the friends and the magic of his childhood.

The storyline’s inspiration comes from the 1991 animation, The New Adventures of Winnie the Pooh: Grown, But Not Forgotten.

Some of the messages in the film, like how we should spend more time with family and retain a sense of imagination, will appeal to big kids even more than little ones.

3. The iconic songs are back

The film opens with the classic title track, Winnie The Pooh, with Pooh singing Up, Down and Touch the Ground and Tigger singing Disney favourite The Wonderful Thing About Tiggers later in the film (both performed by Cummings).

It also includes new songs Goodbye Farewell, Busy Doing Nothing and Christopher Robin, all of which are as catchy as the classic tracks.

In fact, keep reading for a fascinating fact about the song Busy Doing Nothing...

Buy Christopher Robin and watch on your TV box 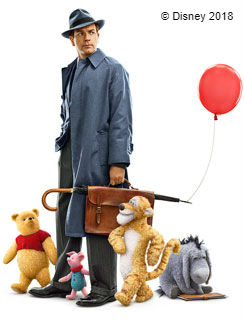 3. Click to buy Christopher Robin and watch on your TV box

Trivia: Did you know…

1. When Christopher Robin’s daughter Madeline takes Winnie the Pooh and his friends out of the Hundred Acre Wood and into London, a woman strolls past with a dalmatian on a lead - a nod to another Disney film, 101 Dalmatians (of which there has also been a live-action remake with another - the prequel Cruella - in the pipeline).

2. It was a Doctor Who reunion around the dinner table, as Peter Capaldi, Mark Gatiss, Sophie Okonedo and Toby Jones - who voiced characters in Christopher Robin - have all previously appeared in the BBC One drama.

3. Although the film is fictional, some elements of the storyline mirror that of the real Christopher Robin’s life, including attending boarding school as a child, serving in World War II, and marrying and having a daughter.

4. Spoiler alert: There’s a post-credits scene that involves Pooh, Eeyore, Tigger, and Piglet sunbathing in a seaside town. An old man sits at a piano playing the original song Busy Doing Nothing, but it’s not just any old man - it’s Disney legend Richard M. Sherman, who with his late brother Robert wrote the songs for Mary Poppins, The Jungle Book and Chitty Chitty Bang Bang as well as Disney's theme park staple It's a Small World (After All), said to be the most performed song of all time. 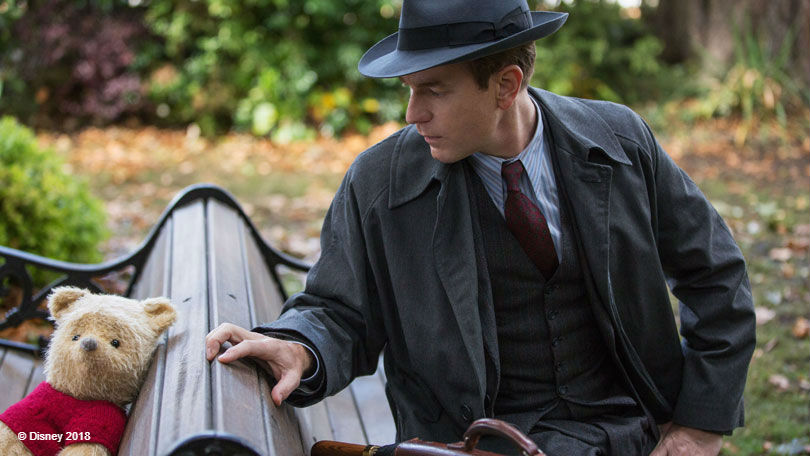 The Scottish actor (Moulin Rouge!, Star Wars), plays the main character in the film. He’s left his childhood, Winnie the Pooh and friends behind in the Hundred Acre Wood, and has settled into working life in London with his family.

My wonderful co-star, the delightful, smart and kind Bronte Carmichael. And Piglet, of course. 🎈

The young British actress (On Chesil Beach) plays the adventurous daughter of Christopher and Evelyn.

Gatiss (Sherlock, The League of Gentleman, Doctor Who), plays the main villain of the movie; Christopher Robin's ex-boss at Winslow Luggages.

Watch Christopher Robin if you liked…

More Winnie the Pooh in the BT TV Film Store:

The Many Adventures of Winnie the Pooh, Pooh's Heffalump Movie and Piglet’s Big Movie are all available to buy now on BT TV.