The stars of Disney's Descendants 2 love nothing more than seeing a fresh take on their movie's musical hits.

Hotly anticipated sequel Descendants 2 is set to premiere on the Disney Channel, reuniting us with our favourite next generation of evil villains.

But as we learned in the first Descendants film, having a baddie for a parent doesn't necessarily condemn you to a life of crime.

The follow-up film returns to Auradon, where the Villain Kids are still struggling to fit in. Maleficent's daughter Mal (Dove Cameron), Jafar's son Jay (Booboo Stewart) and their friends decide that to be able to move forward in their new home, they need to first return to their roots on the dark and dangerous Isle of the Lost.

Viewers will love the fast-paced musical adventure, and actor Stewart reckons his latest role has already been teaching kids that creativity can help them find their own identity – just like his character, the son of evil Jafar. 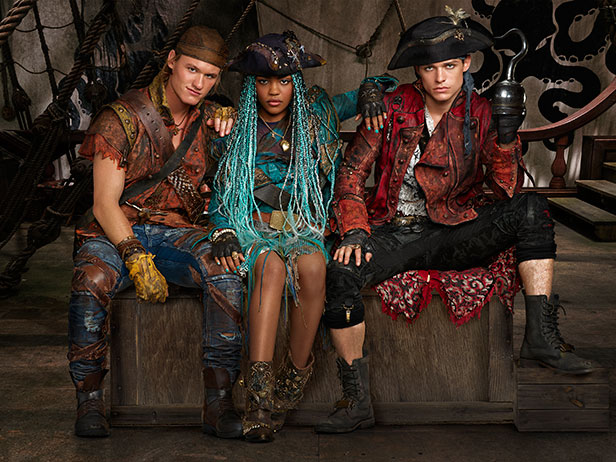 We caught up with him and his co-star Thomas Doherty, who plays Harry, the son of Captain Hook, and they told us all about the excitement and responsibility that comes with influencing young fans.

Stewart said: "I think one of the coolest things is being able to inspire kids to express themselves creatively. I think that's really interesting.

"I'm sure you've seen videos too of people doing covers of our songs – young kids doing covers of the songs. They'll do their own dances in front of the TV or put the song on and do our dance moves and they've learnt it themselves just from watching the movie."

Songs featuring in the film include Chillin' Like A Villain, Ways To Be Wicked, and What's My Name.

Stewart continued: "Things like that and just being able to showcase that there's other ways to express yourself – you can sing, you can dance, you can act, you can do this if you want to. It's there, being artistic and creative. I think it's really cool to be kind of guiding the way I guess. It's nice."

[Read more: Descendants 2 - Everything you need to know]

Doherty agrees his status as a Disney star means he gets the chance to have a positive impact on the kids who watch him, but says the flip side is having to be careful about how he comes across.

He said: "When you do sign to work with Disney in any way - especially when you're in the public image and you have a lot of kids looking up to you and stuff – yeah, I think you do, you kind of take on that responsibility.

"I think it's important for you to be quite switched on to what you're putting out there and how it will be perceived by younger kids growing up. So yeah, you kind of adopt that responsibility yourself to make sure you're spreading a positive message, a good message."