We catch up with the voices of Hiro, Baymax, Go Go and Honey Lemon about the show and to test their own tech knowledge...

Big Hero 6 The Series is crammed with crazy inventions and groovy gadgets – but how much does the show’s cast know about technology and computers? And what are their thoughts on the high-tech heroes in the story? We catch up with Ryan Potter, Scott Adsit, Jamie Chung and Genesis Rodriguez – who voice Hiro, Baymax, Go Go and Honey Lemon in the superhero series – to find out…

There are lots of high-tech gadgets in Big Hero 6 The Series. Which is your favourite?

Jamie Chung: My favourite gadget is Wasabi’s laser hand. It’s like a samurai sword, but with lasers. If I had that gadget in real life, I’d be trimming my trees and my parents’ trees all week long. I’d be mowing lawns and chopping firewood. The sky is the limit with that gadget!

[More from Disney: All you need to know about The Descendants 2]

Scott Adsit: Go Go’s discs are my favourite gadgets. They are magnetised discs that have a lot of different uses. They carry her around as wheels, or they fly around as weapons. They are amazing.

Genesis Rodriguez: I love Honey Lemon’s purse. It’s so cool! Inside, it’s a mobile chemistry set, so it can create lots of different concoctions.

How much do you love gadgets and gizmos? 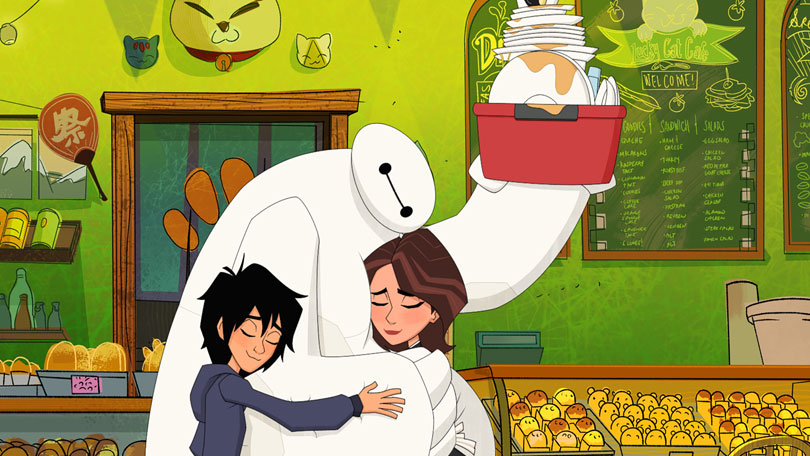 Ryan Potter: Me too.

Scott Adsit: I love all of the crazy gadgets you get to see in the series. And I love the fact that they are all based on real technology that’s being developed right now.

[More from Disney: Is Vampirina Disney's most original cartoon ever?]

If you could invent any gadget in the world, what would you create?

Scott Adsit: An anti-traffic gadget would be cool. I wouldn’t have to sit in traffic any more. That would be lovely. Or Go Go’s discs!

Are you all whizzes with computers and technology?

Jamie Chung: I don’t understand technology very much, but I’m in awe of it.

Ryan Potter: I’m a big computer guy. In fact, I once built a computer. I didn’t build each and every piece, but I put certain parts of it together. I love computers!

How much do you love robots and androids? 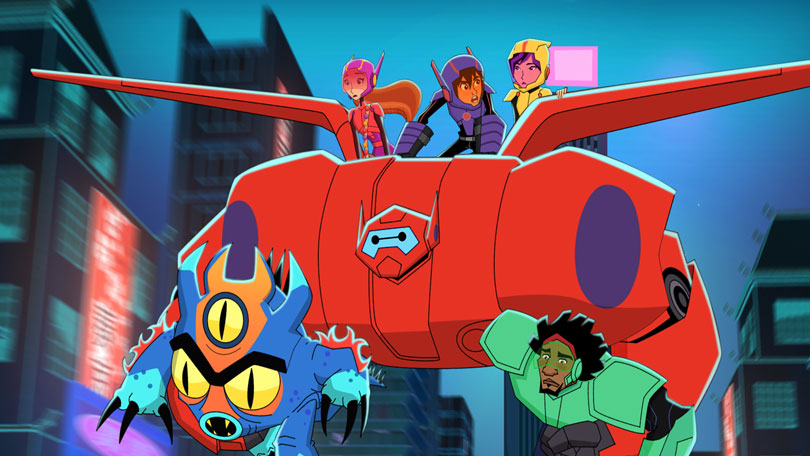 Ryan Potter: Baymax is amazing! He’s an inflatable robot who scans humans to see if they have any medical problems. He’s a robot of the future, and he’s very huggable. He’s the best.

If you could build your own robot, what would you make it do?

Genesis Rodriguez: I would build Baymax. The very first time I saw him, I thought, ‘Baymax is the greatest!’ He’s perfect because he’s so selfless. Plus, he has all those upgrades. You could teach him how to do just about anything.

Is it true that you used to build robots in high school, Genesis?

Genesis Rodriguez: That’s very true! In high school, we had an all-girl robotics team. I was a welder and I was also involved with the pneumatics of the robot, so I would figure out how the robot moved and what actions it was going to take. It was great.

Big Hero 6 The Series is set in the high-tech city of San Fransokyo. What do you think of the animated location?

Ryan Potter: Personally, I love the fact that it’s based on two cities that I grew up in. I lived in Tokyo for seven years, but I also visit San Francisco in the holidays. It’s where my mum grew up. Seeing the two cities together is incredibly surreal. I love it.

Let’s chat about your characters in the show… What do you like the most about Go Go and Honey Lemon in Big Hero 6: The Series?

Jamie Chung: I think Go Go is great because she’s very loyal. She considers this group to be her family and she loves them a lot, which is really sweet. Go Go believes that actions speak louder than words, so she only speaks when she has something very important to say. I like that about her, too. 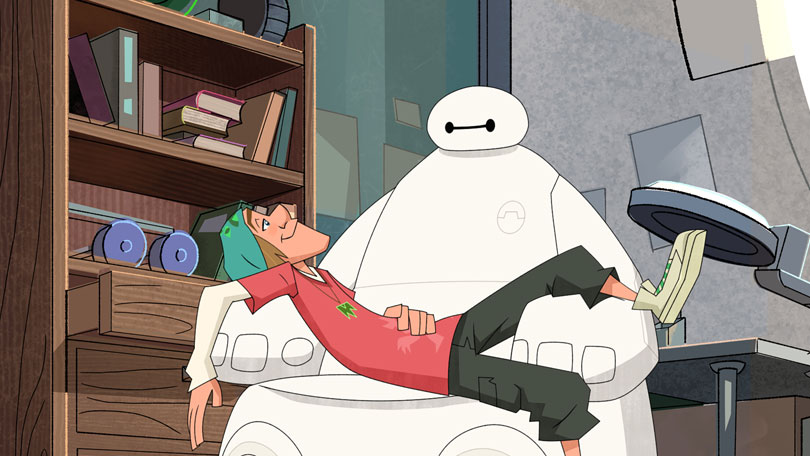 Genesis Rodriguez: I love the fact that we have smart, strong, intelligent characters in the story. We want to inspire youngsters to use their minds to achieve anything they want. I think that’s a really cool message. These characters are normal kids with extraordinary powers because of their minds. If you educate yourself, you can do anything. You can even be a superhero!

Ryan Potter: I love the way that Hiro is able to bounce back when things don’t go his way. I love how he’s able to deal with problems.

Scott Adsit: I love Hiro’s intelligence and the fact that he doesn’t realise what a gift he has until it's pointed out to him. I love that aspect of the story; that it's about intelligent kids who become superheroes.

Jamie Chung: Baymax is the best!

Scott Adsit: I love the fact that Baymax is really funny, but he doesn’t know he’s being funny. I think that’s really charming. Without trying to be a clown, he’s hilarious – although he’s often a little behind everyone else. Or maybe he doesn’t have the programming to deal with some of the situations he comes up against?

If you could speak to Baymax, what would you ask him?

Scott Adsit: I’d ask him, “Will you stay with me forever?” I wouldn’t make him scan me or work. I’d see if we could have a good time without him trying to fix me.

Ryan Potter: I would definitely ask Baymax to scan me. I would want him to tell me if I’m getting enough sleep or drinking too much soda. I want to know that I’m fit and healthy.

What would you ask Hiro if you could speak to him, Ryan?

Ryan Potter: I would love to ask Hiro how he gets his hair to stand up like that. He’s got very cool hair. Even when he’s lying down in bed, his hair stands up. To be honest, I’m a little jealous of it.

Aside from gadgets and superheroes, what are the main themes of Big Hero 6 The Series?

Ryan Potter: Big Hero 6 The Series  is about family. It's about being yourself and being proud of who you are. The show is about setting your mind to something and getting things done. It’s an amazing project to work on.

Why should we tune into the new animated series?

Jamie Chung: If you want a good laugh, if you’re interested in science and if you like superheroes, Big Hero 6 has everything you need – and much, much more!

Big Hero 6 will premiere on Disney XD and DisneyLife on March 1 at 5pm.