Murder on the Blackpool Express: Johnny Vegas takes us behind the scenes on the murder mystery spoof

The most star-studded comedy cast of 2017 unite in Gold's original new feature-length spoof, Murder on the Blackpool Express.

Johnny Vegas, Car Share's Sian Gibson, Griff Rhys Jones, Una Stubbs, Mark Heap, Nigel Havers and Kevin Eldon are just a handful of the comedy heavyweights who have come together for the story of a friendly coach tour of crime fiction locations that turns into a real life murder mystery.

[Who's who - Meet the cast of Murder on the Blackpool Express]

[What to watch on BT TV in November]

We caught up with Johnny Vegas to get the sleuthing secrets behind the hilarious, killer comedy. 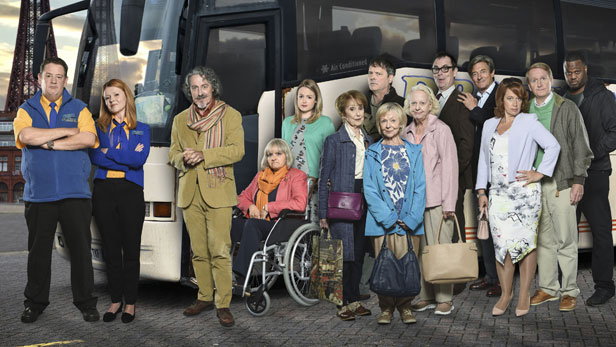 What was it about Murder on the Blackpool Express that appealed to you?

As a one-off piece, it was just a very funny, lovely little script. But predominantly, I think it was the cast that attracted me. The idea of getting to work with legends, contemporaries and as it turned out, thankfully, this lovely set of people who made going to work genuinely so much fun. There's Sian Gibson, who I was already a big fan of, but then to be suddenly going, 'That's Nigel Havers' and reuniting with people I know like Sheila Reid from Benidorm and Mark Heap from years ago with Happiness...

Tell us a little bit about your character Terry? 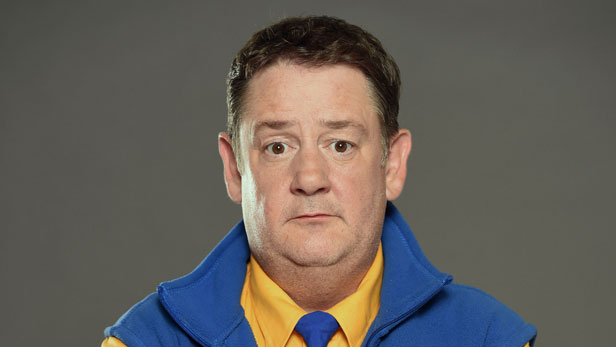 Terry is the long-suffering coach driver. He's a little bit jaded. It's Gemma's (Gibson) business - Terry has not been paid for a while! I quite liked that thing of a man whose not quite beaten by life. He uses his humour (but) he's a man who has given up on ambition. He's accepted his lot in life. It was nice to have this underlying thing that he's carrying this secret torch for his co-worker Gemma too. He doesn't think anything will ever come of it, but he sees that she's still got that confidence and fight in her to make a success of the company.

When people start dying in suspicious circumstances, do Terry ad Gemma realise that there's a murderer on the loose?

Terry is a lot more suspicious early on that something weird is going on when people start dying. I think Gemma is just kind of praying that they are accidents because she knows exactly what is riding on it, business-wise. You've got a group of friends from the old folk's home, and there are people who know each other within it, but everybody has their strange little quirks that keep you guessing whether it could be them. 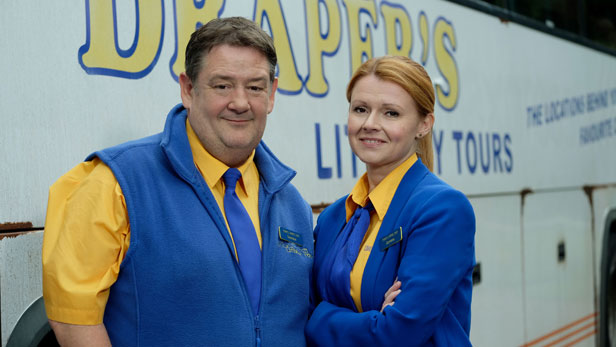 How would you describe the tone?

I think it's comedy played straight, which I quite like, so it is more comedy than drama. Apart from Griff (Rhys Jones) who is enjoying himself! His character is big so I think he sits nicely within that - and that gives us a lot to play off, the fact that he is playing it hammy within.

Were there any nerves on set working with such acclaimed actors?

You're genuinely pinching yourself a bit, going: 'I can't believe I'm on a set with them and that I'm enjoying being on a set with them so much'. Cause I do get nervous. I'm from a stand-up background and I've constantly got that self-doubt. I'm not trained, I'm not from a theatrical background, and it's always a really nice relief when people take you on face value and don't presume that you haven't the skills in the bank. It's nice when you're not plagued with that self-doubt, because you're just having too much fun. 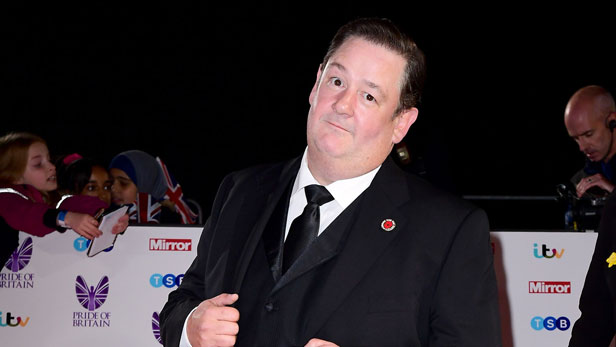 Are you a fan of the murder mystery genre yourself?

I was a huge fan of it for years. I grew up in the kind of Colombo era and my mum's a massive, massive murder mystery fan. I've just been away on holiday with her; I just had a week of watching Vera because that's all she wanted to do. She is not as mobile as she used to be, so I brought her this little Apple TV box and she just watches back to back Vera or back to back CSI. So she got me in the zone, if you like. Murder On The Blackpool Express has a nice twist. It's nice when you get to the end of a script and you go, 'I genuinely didn't see that coming'.

What, in your mind, constitutes the perfect murder?

The perfect murder is dropping a piano on someone. Just the satisfaction of that. It's got that kind of Laurel and Hardy-esque thing to it, you know what I mean? Or I'd push them off a cliff. A gentle push first, so they'd be clinging on, and then I could explain why I did what I needed to do before treading on their fingers.

Murder on the Blackpool Express, a feature length special, airs on Gold on Saturday, November 11.

Gold is on BT TV channel 308 and BT TV customers can also catch up on the BT Player.

[Read more: Is Gold's The Rebel the new One Foot in the Grave?]