BT TV meets the legendary actor to talk about his History series about the story of Captain Cook in the Pacific.

"It's Captain Cook’s Pacific with Sam Neill. I wish it was slightly smaller lettering for Sam Neill," he laughs.

"I don’t want to put myself on the same bold type as Captain Cook or Pacific. It should be Captain Cook’s Pacific *whispers* with Sam Neill."

Sam Neill is quick to play down his qualities as a historian or an expert, but his passion and understanding for Captain Cook's voyages around the Pacific are quickly evident.

Neill was born in Omagh, Nothern Ireland in 1947, but he moved to New Zealand only seven years later. His father was a New Zealander and his mother was English and Captain Cook's exploration and colonisation of the Pacific is something that clearly strikes a chord with the Jurassic Park and Peaky Blinders actor.

"This show title makes it sounds with that apostrophe like Cook took ownership of the Pacific, which of course is misleading,” he explains. "It's actually the other way around.

"This was a man who was possessed by the Pacific…The Pacific really did take possession of Cook and in the end they kept him… He was literally and figuratively consumed by the Pacific." 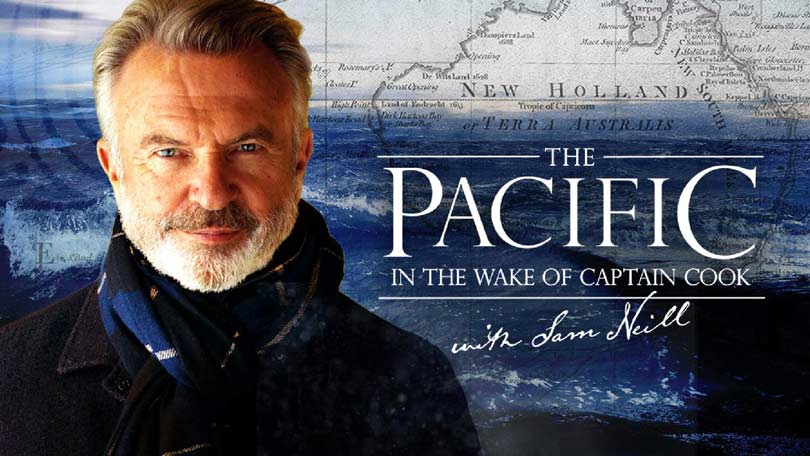 Cook's life and his impact on the Pacific – good and bad – is explored with an appreciation for the devastating impact of colonisation.

"50 years ago it was the 200th anniversary and they were called celebrations then," said Neill. "We don’t call them celebrations anymore in New Zealand. I can’t remember what the term is now, but it’s measured and it ticks the boxes for the Cook haters and the enthusiasts."

A stunning travel show, a moving personal journey and a timely history lesson, Captain Cook’s Pacific with Sam Neill is a powerful and emotional series.

BT TV caught up with Neill to chat in depth about making the show – which he filmed in 2017 – and the true legacy of Captain Cook.

1. Did you know quite how epic a project this would be when you first agreed to make the show?

I’ve always had an interest in documentaries. But this was bigger than I thought it would be. It meant taking a year off my day job. I have two day jobs. One is that I do a bit of acting. But I also produce a wine. Doing this meant that I had to take a year off from both.

I like to think of myself as a man of the Pacifics. What better way to go on a voyage of discovery than in just the same way as Cook. I’ve always been fascinated by Cook and we’ve been brought up by Cook. We were taught in school that history starts with Cook. But that’s a very Euro-centric way of looking at things.

2. Cook is a figure who really divides opinion. How do you balance that in the documentary?

There is a lot of resentment to Cook and his ilk around the Pacific. I don’t take anything away from Cook. He was an extraordinary navigator and explorer and he did go on voyages of discovery. But he didn’t discover anything that hadn’t been discovered already.
While my admiration for Cook only grew the more we explored him and the Pacific. My admiration also grew at the same rate for the Polynesian navigators who knew the Pacific intimately and could travel thousands of miles without compass or sextant without GPS and land with pinpoint accuracy on the other side of the world.

The Pacific is vast, the islands are tiny and these Polynesian navigators could travel because they knew the stars, they knew currents, they knew their way there and their way back. They could discover islands and go back and forth, prior to Cook even arriving in the Pacific. So of course there is resentment to the idea Europeans discovered the Pacific- they really did not.

Cook also takes a bit of flak because he was the harbinger for things to come. The arrival of people like my family that followed in the next 250 years.

3. Is it fair to say you found making this film emotional? 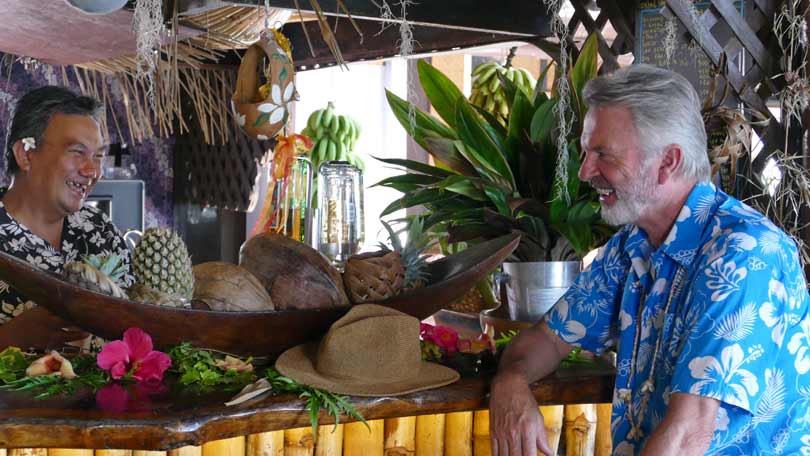 We go to the Aleutian Islands and I was talking to the chief of the local tribe. These islands run from Alaska to Siberia, the Russians turned up before Cook and they were brutal. They raped, enslaved and tortured these people. But disease did most of the work for them. These were Russian traders and within a couple of decades 90% of the population was dead. I said to one man we interview, ‘how do you recover from that?’ The answer he gave broke my heart. ‘You don’t recover from that’, he said.

Colonialism is not a pretty picture. But what we also explore are those signs of recovery. Polynesians and the people of the Pacific finding their voice again.

For instance, I was really privileged to meet a man called Nainoa Thompson. He is native Hawaiian. He is the single most important person on the planet to rediscover Polynesian navigation. Now all over the Pacific there are navigators, double hull canoes that sail in exactly the same way that they did. So they can go from Hawaii to Easter Island to Tahiti, unaided by any kind of technology. It's a fantastic thing and miraculous.

4. The series feels quite timely with so many debates about immigrations and nationalism at the moment? 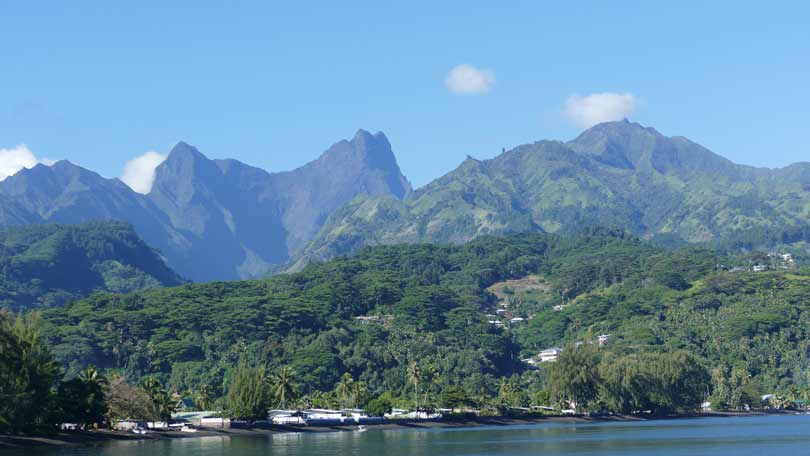 One of the interesting things is that most post-colonial societies, they want to put their colonial history in the past. With one exception – French Polynesia. Where they are still part of Europe. Brexit or whatever the equivalent would be in the Pacific, is not for them.
They are part of Europe because they are a department of France and the benefits of being part of Europe are self-evident to them. And they have no wish to be not part of Europe ever. I mean a few of them do, but they have trouble getting traction… because… it’s quite good to be part of Europe.

5. You discover a lot about one of Cook’s fellow voyagers Joseph Banks – he’s quite the character! 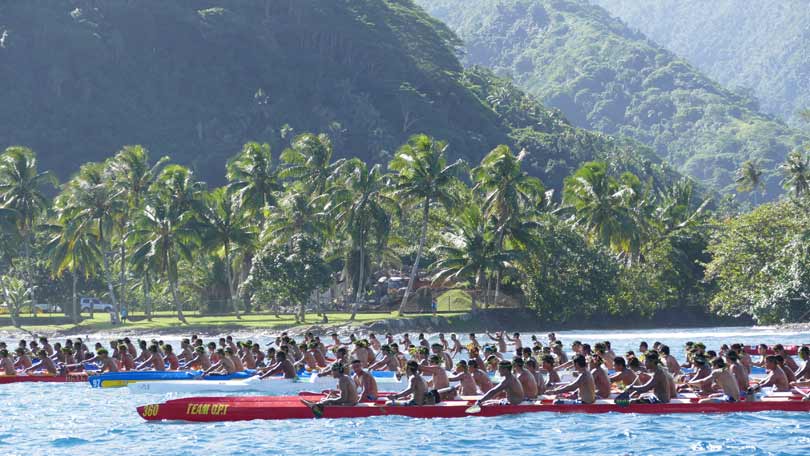 Banks is fascinating. One of the interesting things about these voyages is that because they are British, they do involve class. It’s still true today in Britain isn’t it? I watched Come Dine With Me in my hotel room earlier and it’s an essay in class.

Banks was a toff and very wealthy. He wasn’t a scientist, but he was genuinely interested in science. And he took credit for a great deal of that first voyage, which irritated Cook. The next time Banks demanded three decks to be built for his servants and botanists, which would have made it completely unseaworthy so he never went back with Cook.

The great thing about Banks was that he was a great self-publicist. He in fairness brought a lot of money to that voyage. Cook was relegated and the captain’s cabin became Banks’. It became his laboratory. If you go to Australia all kinds of plants are named after Banks because he was an avid collector of all sorts of things nobody had seen before in Europe. He put his name to everything. Banksia this and Banksia that. A fascinating character. And a bit of a root rat as we they are known in New Zealand.

6. Would you have liked to play Captain Cook on screen?

Sadly, I’m a little old for that now. He was 50-something when he died. For those days, that was old and he was probably suffering from something near the end. He was given to bouts of fury near the end, which was uncharacteristic, because he was normally a measured man. There are two portraits of him. One where he looks very handsome and a little bit like Liam Neeson. But the other one taken by an artist on board, Parkinson, which was given to the long-suffering Mrs Cook – that painting is in a museum in Wellington.

In that one Cook is a much plainer looking man and nothing like Liam Neeson at all. Those are the only paintings, so it’s hard to know what he looked like. He was in his 40s in the first voyage and died in his 50s. I’m well past that now. Plus – I get sea sick.

7. Is it true that you got a tattoo while filming? 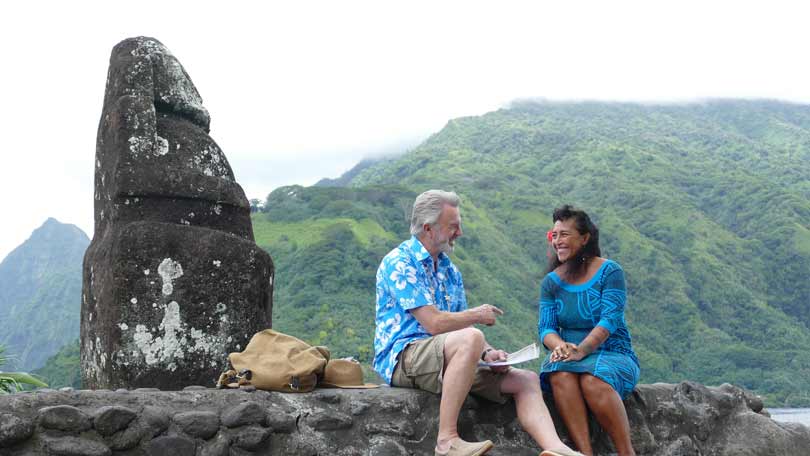 *Rolls up sleeve to show the tattoo*It was a bit last minute! I have another one on the other arm from a film Blackbird, we filmed last year. We all got one in the cast, Susan Sarandon and Kate Winslet.  We all got tattoos to mark having done that.

But this first one was done by an old friend of mine Gordon Toi. A great artist, who was in The Piano with me. We’re old friends. We wanted to film him doing tattoos to capture the return of Polynesian culture and I said, ‘why don’t you tattoo me Gordon?’ He said, ‘What do you want?’ and I said,’ Gordon you’ve known me for 25 years, you know what I need’. And he said, ‘I do’. I just left it to him. It’s the story of my life, my children, and my travels through life.

Customers with HD channels can watch on BT TV channel 379.

History is available on BT TV along with channels including Lifetime, Crime & Investigation and many more.