The creator of Peaky Blinders talks to BT TV about working with Matthew McConaughey and Anne Hathaway on his mind-bending new film.

Serenity is no ordinary movie. "We're getting a car going, smashing it into a tree and we’ve got one wheel rolling down the road and we follow that,” says writer and director Steven Knight.

The Peaky Blinders creator and Oscar nominee is explaining the motivations behind his mind-bending new Sky Cinema Original Film, which brings together two of Hollywood’s biggest stars for a movie that breaks all the ordinary rules of storytelling.

On the surface, this is a traditional tale of a fishing boat captain with a classic American hero and a femme fatale, but nobody should go into Serenity expecting a predictable finish.

"When it’s a genuine surprise, people react wildly to it, because we’re not obeying the rules," says Knight.

Ahead of the film's release in UK cinemas and on Sky Cinema from March 1, BT TV spoke with Knight about the secrets of Serenity.

The twist nobody will see coming 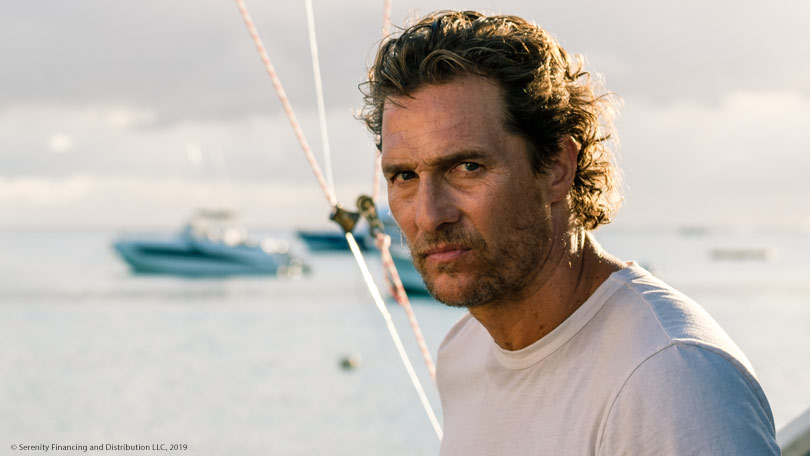 "I don't believe in the age of social media, you can really keep a big twist secret," Knight admits.

"When The Sixth Sense came out, there was no social media. I hope people will go, even if they know the twist, and will enjoy watching the unravelling."

However, for those who manage to avoid spoilers, they are in for a shock.

"I wanted to set it up as little as possible. It is set up a bit because you feel obliged to offer something, but I wanted to do it at the most inconvenient moment for the story. Just when you think you know what this is about – when Karen (Anne Hathaway) says, I’ll give you 10 million dollars if you kill my husband – at that moment, we take it all away."

And if you do know the twist, there are still plenty of secrets and hidden Easter Eggs that the writer claims nobody has picked up on yet, which relate to the big twist.

"I hope that people do [watch it again]. There are things that haven’t been commented on yet. That’s part of the fun of it," he said.

The magic of McConaughey and Hathaway 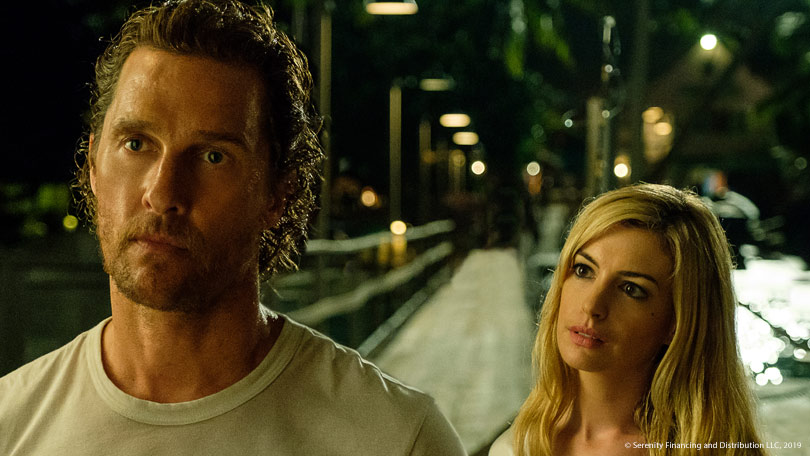 "I think Matthew and Anne are the best actors on the planet. Or any planet. They were first choices and when first choices say yes, it's always wonderful,” says Knight, reflecting on his impressive cast.

"They needed all their complexity to go along with this and play this game."

"I think they both enjoyed playing these archetypes. She is the femme fatale. He is a particularly American hero, going back through literature from Captain Ahab through Hemingway into films of the 30s and 40s with Humphrey Bogart and Robert Mitchum, where you have the American, dislocated, isolated man, at sea, surrounded by the void, looking for something, with lots of secrets. I wanted Baker Dill to absolutely be that archetype character."

Despite working closely with McConaughey, Knight can’t put his finger on the magic that he brings to the screen.

"I've come to the conclusion that it’s something you either have or haven’t got," said the writer.

"Tom Hardy has got it. Matthew has got it. It doesn’t matter how many explosions are going on, you are looking at the eyes of that person. The story is there.

"What is then even more beguiling is that they don't give it away. So you are constantly looking at them to find out what's going on. I don't think it's a technique, I think it's something they just have." 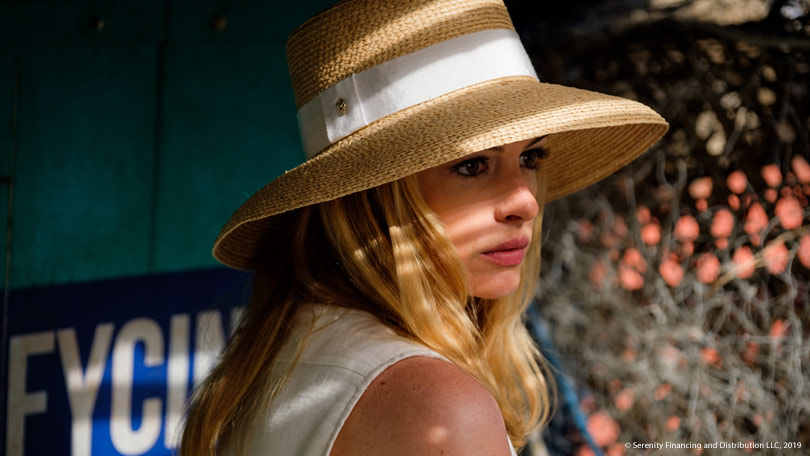 "I write things for studios, conventional stuff and occasionally ideas come to me and I know that I hand it over, it will turn into something normal," explains Knight. "I know it will get changed.

"With Locke, I wanted to take the most ordinary man in Britain and have him drive down the motorway and see if I could turn that into a film.

"The film industry seems to attract rules more than any other with the three-act structure and characters' arcs and all those things that you are told are films, when they’re not, they’re just rules.

"In this film I wanted to take all those rules, add a heightened narrative, so it’s even more ‘of the film business’… and then pull the rug out completely." 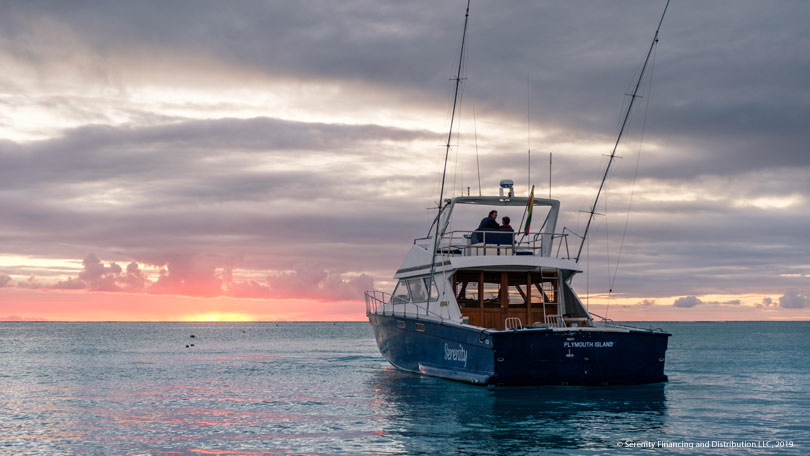 Expanding on his interest in pushing the boundaries of traditional movie structures, Knight explained that he had been influenced and interested by the format of computer game storytelling.

"It's a bit more like Greek myths. Hercules doesn't change or have a character arc. He just does tough things. I think the ways computer games unfold will impact on the way films are made." 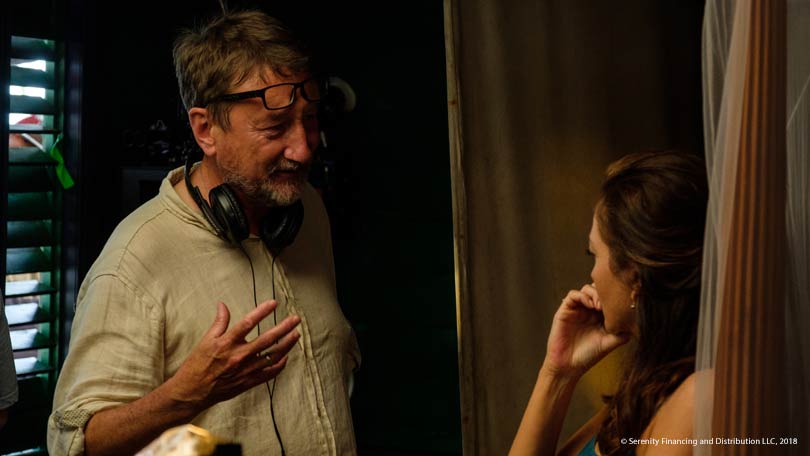 We couldn’t speak to the mastermind behind the Brummie BBC drama and not ask about the latest developments in the Peaky universe.

A new series on the way, but beyond the TV screen and a rumoured film, there are also plans for a Peaky Blinders computer game.

"Yes, there will be one," said Knight, before adding: "I shouldn’t really announce it, probably."

However, Knight won't be entering the world of computer game writing for the project.

"I've bene approached with suggestions of stuff like that in the past," he said.

"I think it was something to do with East End gangsters. The problem for me was that there were so, so many options. If you go through one door, you have a different bit of dialogue and it just grows exponentially. It’s just too much."

Speaking about the TV series' growing fandom and celebrity fans, he said: "It’s astonishing to me. It’s not just in the States. I’ve had long conversations with Snoop Dogg in London. I’ve chatted about it with ASAP Rocky before Christmas, he's a massive fan. David Beckham is a massive fan.

"But it's also a working class phenomenon, people are getting the haircut, wearing the clothes and going to the races.

"In the States they're picking up on it and also around the world in Turkey and South America. All over the world, people are identifying with this thing, which I thought was very specific. 1920s Birmingham. And yet it seems to have struck a chord all over the place."

Serenity is released in cinemas and available on Sky Cinema from March 1.

With standard BT Broadband you can enjoy on-demand; with BT Infinity, you get 11 Sky Movies channels too.