Star Wars: The Rise of Skywalker - All you need to know about the final chapter in the nine-film saga

The surviving Resistance faces the First Order once more in Star Wars: Episode IX. From the release date and the trailer to the cast and characters - discover more about the film now.

Film fans have been eagerly breaking down the meaning of the final trailer for Star Wars: The Rise of Skywalker, as tickets went on sale - and broke records.

There's not to wait until we can watch the J.J. Abrams-directed flick, which follows the surviving Resistance as they face the First Order once more, in the final chapter of the Skywalker saga.

Cast members Daisy Ridley, Adam Driver, Mark Hamill, Oscar Isaac, and Domhnall Gleeson all return for the film, which is being described as the ‘riveting conclusion’ to the epic 9-film spectacle.

From the release date and the brand new trailer, to the full cast list and the storyline, we reveal everything we know about Star Wars: Episode IX so far…

Star Wars: The Rise of Skywalker release date in cinemas

Mark your diaries because Star Wars: The Rise of Skywalker is in UK cinemas now.

The final trailer: Get a glimpse of the film right here!

From Daisy Ridley to Adam Driver - cast in a nutshell

Daisy Ridley (Murder on the Orient Express) returns as Rey, alongside John Boyega (Detroit) as Finn. Adam Driver (Girls) is back as Kylo Ren, as well as Domhnall Gleeson (Ex Machina) as General Hux.

Oscar Isaac (Inside Llewyn Davis) is back in the fold as Poe Dameron, plus Kelly Marie Tran (Sorry for Your Loss) also returns as Rose. Anthony Daniels is also back as droid C-3PO - having spent four decades in the iconic gold suit. 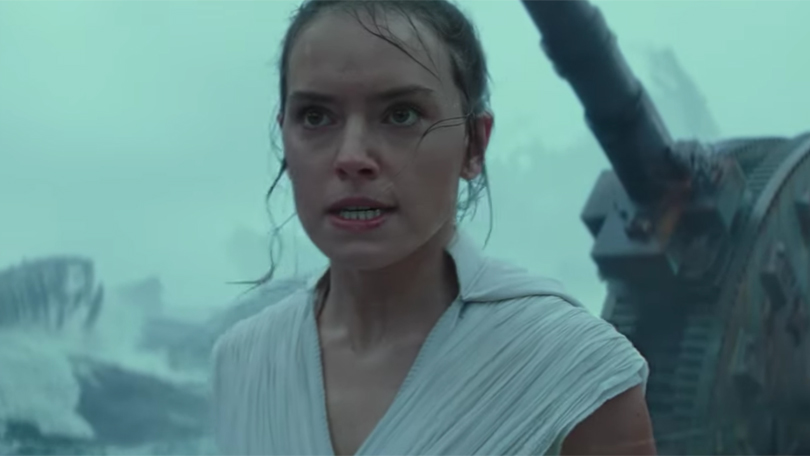 Mark Hamill (Knightfall) is officially returning as Luke Skywalker. Carrie Fisher, who died in late 2016, will appear in the film as Leia Organa, through the use of unreleased footage from the two most recent Star Wars movies.

Storyline info - What will happen in Star Wars: The Rise of Skywalker?

The official description for Star Wars: The Rise of Skywalker from Disney is as follows:

“The surviving Resistance faces the First Order once more as Rey, Finn and Poe Dameron's journey continues. With the power and knowledge of generations behind them, the final battle commences.”

Disney have also called the film the 'riveting conclusion of the seminal Skywalker saga, where new legends will be born and the final battle for freedom is yet to come'.

This means that The Rise of Skywalker draws the nine-film saga - that started back in 1977 when George Lucas created the iconic sci-fi series - to a close.

According to DigitalSpy.com, cast member John Boyega has previously hinted that the film follows a time jump of around a year from the end of The Last Jedi.

A lot has got to happen in the film, so it's no surprise that it has the longest run time of any Star Wars movie ever. GamesRadar.com reports that the film is 155 minutes long (that's 2 hours, 35 minutes).

Filming locations revealed: From Pinewood to the Middle East

The film was largely shot at Pinewood Studios in Buckinghamshire, England, but filming also took place in Wadi Rum, Jordan.

Star Wars sequels: Have any more films been confirmed?

Well it’s good news for fans of the Star Wars theme tune as three more sequels have indeed been confirmed. Disney announced in May 2019 that there will be more Star Wars films coming in 2022, 2024, and 2026.

According to Polygon.com, the next Star Wars film will hit cinemas on December 16, 2022 - after the conclusion of the epic, nine-episode Skywalker saga. Whether that will be the start of a new trilogy, a series of stand-alone Saga-style films, or something else altogether, is unconfirmed.

Of the future of the Star Wars films, Lucasfilm president Kathleen Kennedy previously told EW: “We’re going to take a hiatus for a couple of years. And we’re taking the time to really look at where this is going from the standpoint of a saga.”

She continued: “We’re not just looking at what the next three movies might be, or talking about this in terms of a trilogy. We’re looking at: ‘What is the next decade of storytelling?’”

Star Wars: The Rise of Skywalker is released in UK cinemas now.