The Lego Movie 2: The Second Part - Reasons to watch the witty and hilarious sequel to the 2014 family film with Chris Pratt and Elizabeth Banks

We reveal the best bits about the movie, fascinating facts you didn’t know, who voices the characters, and more, as The Lego Movie sequel is released in the BT TV Film Store.

Chris Pratt and Elizabeth Banks return in The Lego Movie 2: The Second Part - the witty and hilarious sequel to the 2014 family film.

Directed by Mike Mitchell (Trolls), the film follows Emmet Brickowski (Pratt) as he attempts to rescue his friends from the Systar System, while dealing with a coming cataclysm known as 'Armamageddon'.

It's been five years since everything was awesome and the citizens are facing a huge new threat: Lego Duplo invaders from outer space, wrecking everything faster than they can rebuild.

Here, we reveal the best bits about the movie, fascinating facts you didn’t know and Easter eggs you didn’t spot, who voices the characters, and more, as The Lego Movie 2: The Second Part is released in the BT TV Film Store.

> The Lego Movie 2: The Second Part is available to buy or rent on BT TV and watch on your TV box now

Who voices the characters? 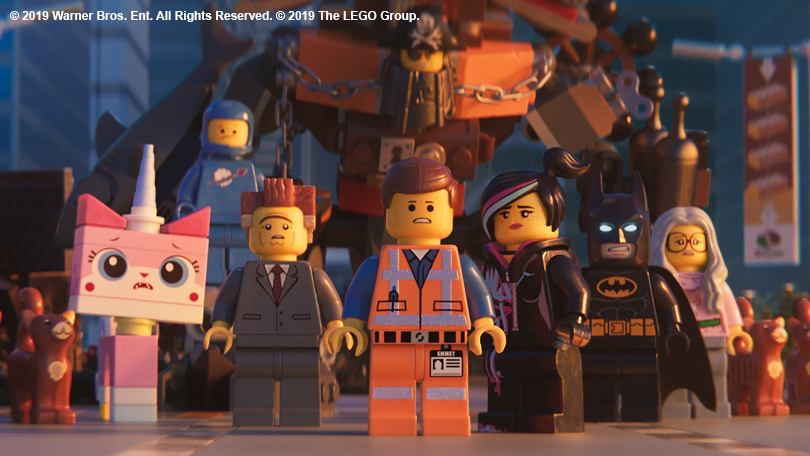 Maya Rudolph (Bridesmaids) and Will Ferrell (Anchorman) feature in the live action scenes as 'Mom' and 'Dad'.

3 reasons to watch The Lego Movie 2: The Second Part…

Comedy geniuses Phil Lord and Christopher Miller have returned to pen the script for The Lego Movie 2 after writing the witty and hilarious script for the first film.

Between them, the pair have worked on comedy films including 21 Jump Street and its sequel 22 Jump Street, both Cloudy with a Chance of Meatballs films, and Spider-Man: Into the Spider-Verse (winning an Oscar for the latter).

TheWrap's Yolanda Machado praised the pair’s screenplay, writing that it "expands on the original film's premise, adding new worlds and characters to the growing Lego universe, while also crafting a story that is timely, inventive, hilarious and perfect for all ages.”

As well as the family-friendly humour, the pair also added new characters to their world - notably more women.

This is after they promised the second film would feature more female characters and better represent female audiences.

The film also features more live action scenes with Maya Rudolph and Will Ferrell, with Hannah Wales from The World of Celebrity writing: “There are more frequent cuts between the live-action home scenes… with what’s occurring there directly influencing the animated Lego story.”

The Lego Movie 2 sees the return of most of the Justice League, including Channing Tatum's Superman, as well as Jason Momoa’s Aquaman and Gal Gadot’s Wonder Woman, to name but a few.

But the biggest Easter egg of the film is Rex Dangervest, who’s a mash-up of all of Chris Pratt’s previous roles, according to ScreenRant.com.

Andrew Dyce from the site writes: “Blasting into the film with a spacesuit, face-obscuring space helmet, and jetpack, the ‘galaxy defending archaeologist’ is a clear nod to Star-Lord, Pratt's leading role in Marvel's Guardians of the Galaxy.

“The ‘cowboy’ would be a reference to his role in the ensemble Magnificent Seven remake, with his overall expertise as a ‘raptor trainer’ showing some love to his part in the Jurassic World movies.”

Even the raptors take the mick out of Pratt’s role in Jurassic World, creating a massive in-joke for Pratt fans.

On the subject of Easter eggs, a scene featuring Daniel Radcliffe as Harry Potter was reportedly cut from the movie so as not to upset any Wizarding World enthusiasts.

There are more songs in The Lego Movie 2 than in the first film, thanks largely in part to the success of the first film’s earworm, Everything Is Awesome.

This movie has loads of catchy musical numbers that sound like pop songs, that will undoubtedly get stuck in your head.

In fact, producers of the film created "Catchy Song", which main lyric is the repeated phrase "This song's gonna get stuck inside your head".

Thank you LEGO Movie for getting your Catchy Song stuck in my head pic.twitter.com/6GsxRCqxbR

How to buy The Lego Movie 2: The Second Part and watch on your TV box

3. Click to buy The Lego Movie 2: The Second Part and watch on your TV box now

1. Two of the raptor's names are Ripley and Connor - named after sci-fi hero Ellen Ripley, from the Alien franchise, and John Connor, from the Terminator franchise.

2. When Emmet makes his spaceship to rescue his friends, he says to “buckle up”. This is a reference to Guardians of the Galaxy, when Star-Lord (Chris Pratt) tells Groot (Vin Diesel) to buckle up.

3. Velma from the Scooby-Doo franchise makes a cameo appearance, possibly to tease Warner Animation Group's upcoming full-length feature film, Scoob, which is set to be released in 2020.

5. [SPOILER ALERT] When the Justice League go to fight the alien invaders, someone asks where Batman is, to which Superman replies that he's off on a solo adventure. This suggests that the events of The Lego Batman Movie (2017) took place before the events in this movie, according to IMDB.

What the fans are saying about The Lego Movie 2: The Second Part:

Fans of the film called shapeshifting alien Queen Watevra Wa'Nabi, voiced by Tiffany Haddish, one of their favourite characters in the movie...

#TheLEGOMovie2 is just as awesome as the first one with an even catchier new song. My favourites are Batman @arnettwill and Queen Watevra Wa'Nabi @TiffanyHaddish and the #Radiohead joke and the toaster room. #CatchySong

I think this one feels a little different from what I’m used too. I recently watched The Lego Movie 2 and Queen Watevra Wa’Nabi is one of my favorite characters from the movie. #TheLEGOMovie2 pic.twitter.com/m8pA6ld2Oq

I've watched The Lego Movie 2 and I simply LOVE every moment of it! Seriously, Rex, Ultrakatty and Queen Watevra are my favorites!💙☺️#TheLEGOMovie2

Well, I've builded queen whatevra as a tree. 😂 I think I'm proud of myself.

Find out where it all began with The Lego Movie (2014), available to buy or rent on BT TV now. The Lego Batman Movie and The Lego Ninjago Movie are also available now - perfect for a rainy day.

> The Lego Movie 2: The Second Part is available to buy or rent on BT TV and watch on your TV box now