The executive producer talked to UK fans at the London premiere of the thrilling AMC drama.

Speaking at the London premiere of the hit AMC series, executive producer Gale Anne Hurd told fans that they can expect a "pressure cooker" second run of the zombie show as the characters who survived the beginning of the apocalypse, now try to escape Los Angeles via boat.

The plotline was inspired by comments from fans of companion series The Walking Dead, who often claimed the best plan to escape 'the infected' would be to head for water. However, Hurd revealed that anyone thinking life would be easier at sea will be very much mistaken.

"What our characters are about to find is, there's no safe harbour," she said.

That doesn’t mean swimming zombies, but the infected are still a threat. 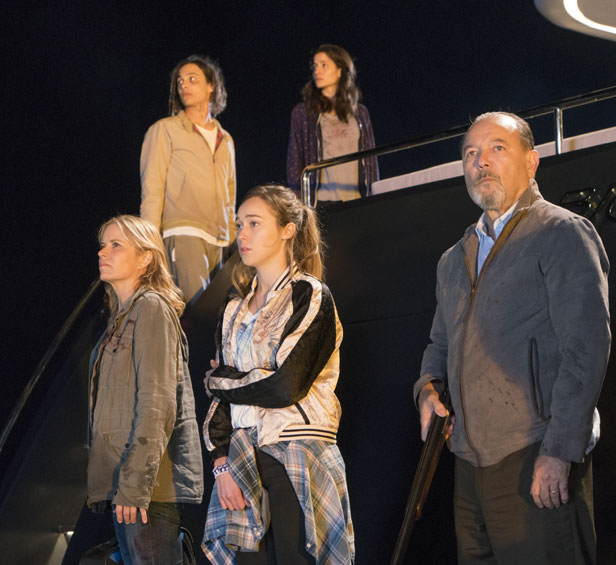 "The first thing was, ‘no, they can’t swim’. If they can’t climb, then they can’t swim because it’s something you would have to do intentionally," said Hurd, who revealed that the show’s writers had developed a "whole new vocabulary" for zombies at sea.

"But at the same time, the infected don't drown – they don’t need air to breathe. They can wade, they can float sometimes, depending on their bodyweight just like the rest of us."

When asked how the new setting of Victor Strand’s boat Abigail would impact the tone of the show, she said: "It’s hard enough being in the zombie apocalypse to begin with. But when you’re a fractured family, joined by another fractured family and you’re on a boat…and it’s not even your boat… it’s Victor Strand’s boat and we don’t know what his agenda is – it’s a recipe for complicated relationships. That makes for great drama."

Series two was filmed at Baja Studios, which was originally built by James Cameron for Titanic, and production designer Bernado Trujillo put together the set and boat with his crew in just a matter of weeks.

But don’t be fooled, just because they’re not really at sea doesn’t mean the actors aren't suffering.

"There is a 22 million gallon tank that Jim Cameron built for Titanic and the water is seriously cold," said Hurd.

Hurd didn’t want to reveal any spoilers for fans waiting for the show’s return on Monday, April 11, but she did tease that one of the show’s key themes this year would be “blood versus bond".

In the case of Ofelia you no longer trust your father – her whole belief has changed in him knowing that he was a torturer – and then they failed to save her mother,” said the exec.

"And then in the case of Travis, Chris will never understand that there wasn’t an option to save his mother. Travis was actually doing what Liza wanted, but Chris has a lot of demons to work out."

It was also hinted that the relationship between Madison Clark (Kim Dickens) and Victor Strand (Colman Domingo) could be a source of conflict.

"She knows that her intentions are good, she is a protector, she wants to save other people," said Hurd.

"The Strand only wants to save himself. Maybe he wants the others for some unknown purpose, but she’ll take him on. She’s like a mamma bear with her cubs and she’ll take on anything."

"Literally from the first time he auditioned, he brought such charisma, such conflict and such pain… and also an innocence," said Hurd.

"And as this season goes on, you’ll see even more of those colours. And there’s just something so mesmerising about him. There were about five of us casting the show and he was the one where we all agreed and knew straight away it was him."

Hurd, who worked on The Terminator with James Cameron and movies such as The Abyss and Aliens, also explained why she keeps coming back to apocalyptic scenarios with her work on the big and small screen.

"The kind of drama that I like is putting ordinary people into extraordinary circumstances and there isn’t anything more extraordinary than the end of the world," she said.

"I also love empowering people who never believed they had the strength to survive."

Stare into the Abyss: First look at Fear the Walking Dead series 2:

Of course, the big question fans wanted answered was after The Walking Dead, Fear and Flight 462 (an online miniseries), could there be another companion series set in the UK.

"We have our hands full right now, but I never say never,” said Hurd. “Just as long as it justified itself with the right story and the most interesting characters – not to just repeat itself with things we’ve already done.

"That’s why it took a while to get Fear off the ground, we wanted to make sure it stood on its own and didn’t mimic characters on the original show."

The show will be simulcast with the US release at 2am and will also be repeated later that day in primetime at 9pm.