Stripped across the week, this four-part cold case crime drama will have viewers hooked.

Sarah Parish was left black and blue from filming the action-packed thriller Bancroft.

Nothing too dramatic happened though - just, as she says herself, "a lot of falling over".

[Bancroft: Meet the cast and characters of the ITV thriller]

The 49-year-old star was determined to do all her own stunts as "ruthless and courageous" detective Elizabeth Bancroft, who doesn't mind getting her hands dirty.

"She was incredibly complex and fiercely focused," she remarks. "She was different. It's quite nice playing someone that isn't always redeemable."

Parish has played an impressive range of roles on British TV and viewers will recognise her from her stints in huge shows like W1A and Broadchurch.

She can switch from comedy to gut-wrenching drama in an instant but, by her own admission, it's quite a long time since she's played a big lead role like Bancroft.

The job was full-on - involving exhausting night shoots, split days of filming, chase scenes - but she loved every second of it.

"It's almost easier than coming in twice a week to do your bit," she says.

"If you're in working all the time, you suddenly become that person, that character, and it's much easier."

Over the course of the four-part ITV drama, written and created by Kate Brooke, viewers will follow Elizabeth's operation to bring down the pernicious and vicious Kamara gang.The drama really unravels though when her colleague - ambitious recruit DS Katherine Stevens - starts working on the case of a woman called Laura, who was killed some 27 years ago.

It appeared someone, believed to be under the influence of drugs, had broken into her house, took some of her jewellery and stabbed her violently, Parish explains. 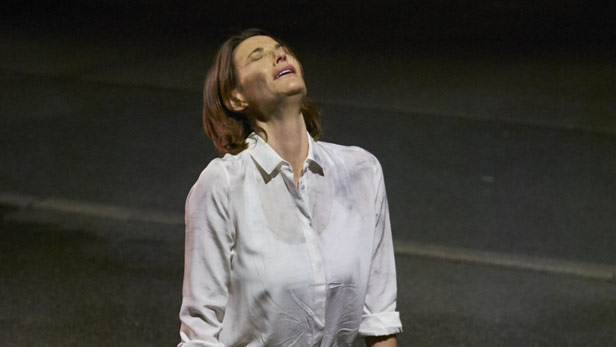 But the case was never solved.

Which leads to a burning moral issue the show encompasses - how can a murderer who has evaded justice live with the guilt of what they have done?

[McMafia: Meet the cast and characters of the epic new BBC drama]

"I think there is an ability just to cut something off, put it in a box in the back of your brain, forget about it and get on with it," Parish says thoughtfully. "Some people just have that ability. They can compartmentalise.

"But I can understand that roller coaster people go on when they've lied. They start to cover up that lie and it just becomes a huge web of deceit they can't get out of. I've seen people do that and seen it spiral out of control."

As the investigation into Laura's death continues, it becomes clear that Elizabeth has dark secrets of her own, and maybe she knows more about the case than she's letting on.

Especially when the victim's husband, Tim, turns up out of the blue.

Memories Elizabeth had buried away become unearthed, and there are scenes showing her working as a young policewoman 27 years ago.

So she could play her character across the decades, Parish worked with a company which achieved an anti-ageing effect on her face on screen.

These scenes were technically quite tricky, she says. But "it looks so real".

[Read more: Christmas on ITV - What's new and what's on]

"It doesn't really look like when you were young," Parish elaborates. "It looks like a younger version of who you are now."

She continues: "It's much better than simply using a different actor for the younger scenes. There is always something intrinsically not right about them.

"To use the same actor is great. You've got the same intention, the same energy. It works really well."

Parish's work ethic shines through - it's clear she wants to throw herself into every element of the role she can. 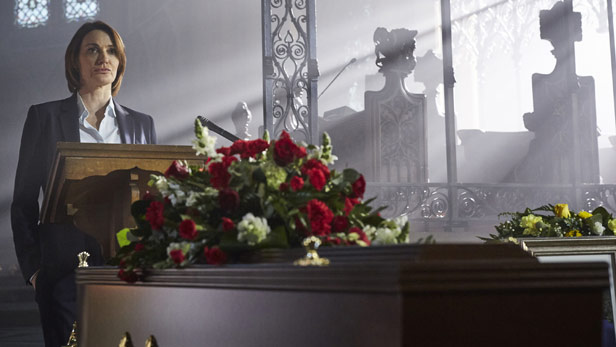 She even gave 100% to a scene they filmed in a bowling alley.

"I got quite a few strikes on the day, funnily enough," she recalls with a smile. "I'm really not a bowler at all, yet for some reason I managed to pull it out of the bag that day."

Parish also talks fondly of how most of the filming took place in Bolton, Rochdale and surrounding areas.

It was a welcome return to the North West for the star who spent years working there while playing a hairdresser in BBC One drama Cutting It. She met her now-husband, James Murray, while they were starring in the show together.

"I got a flat in Manchester's Northern Quarter, very near where I used to live the last time I was working there," she says. "So that was quite nostalgic and brought back a lot of memories."

Cutting It was arguably the role that made her one of British drama's most sought-after actresses.

But it's 15 years since that show aired, and there's no denying the TV landscape has changed massively since then.

In fact, Parish thinks we're now in a "golden age of TV drama". 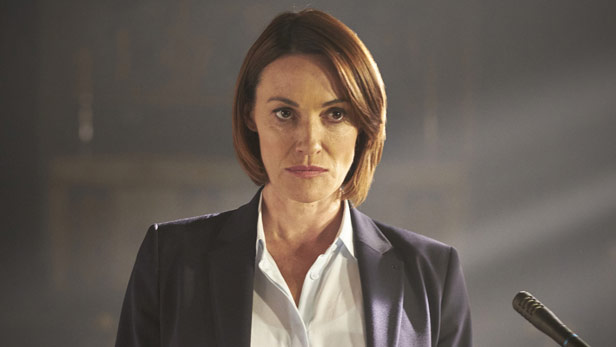 "TV writing is where it's at today," she elaborates. "If you go to the cinema, it's just full of big blockbuster films. There's not a lot of nuance in film at the moment.

"Whereas, TV drama has taken a front seat and it's where everyone wants to be. That's why we've got series like Big Little Lies with Nicole Kidman and Reese Witherspoon - things with really big stars in.

"They know they are going to be able to tell a proper story again."

Something tells us many more exciting stories will be told by Parish in the future, too.

Bancroft is on ITV for four consecutive nights from Monday December 11.

Never miss an episode on BT TV - catch up via the ITV Hub app.

[Read more: ITV's Bancroft - Everything you need to know]