The Chase: The funniest answers ever given to Bradley Walsh

The studio audience couldn't help but giggle after these amusing bloopers from unfortunate contestants.

We all know how the mind plays tricks on us when we're under pressure, but that doesn't stop viewers giggling at every new embarrassing answer on ITV's populay daytime gameshow The Chase.

Who could forget when contestant made such an epic blunder on the Bradley Walsh series that it ended up trending on Twitter.

The competitor was asked to name the colour of the Statue of Liberty and was even given three options to make the answer easier - blue, pink or green.

[Read more: Who are The Chasers? Meet the quiz experts]

However, the contestant was stumped and opted for pink - because it was her favourite colour 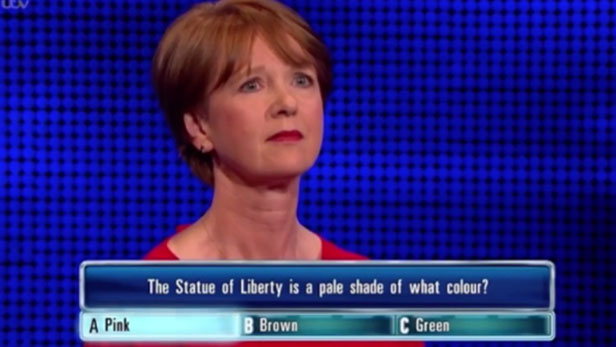 The studio audience couldn't hold back their giggles and viewers on Twitter saw the funny side.

still can't believe that lady on The Chase thought the Statue of Liberty was pink, these are the people voting for Prime Minister next week

As if some woman on The Chase thought The Statue of Liberty was a shade of pink ! pic.twitter.com/V1L0LpfT73

You signed up to a quiz show and think the statue of liberty is pink?? #TheChase

What if the Statue of Liberty was pink though? #TheChase pic.twitter.com/O82Jfriq8j

Someone on chase has just said Statue Of Liberty is pink 😧😧😧😧

The Chase has a history of some of TV quiz show’s funniest ever answers. Here are some of the show’s most memorable blunders:

1. “Complete the popular saying, "Always a bridesmaid, never the…"

2. "What member of the crow family, native to the UK has a bare face."
Answer: Russell Crowe

3. "A £2 coin issued in 2015 was criticised for a ‘schoolboy error’ because it showed King John holding what?"
Answer: A mobile phone.

5. "The Asteroid 4238 Audrey is named after which actress?"
Answer: Kim Bassinger

6. "In 2009, Sunderland scored against Liverpool when the ball deflected in of what object? A beach ball, an ice cream van or a sunbathing German."
Answer: Ice Cream Van

7. "Haymarket and Park are train stations in what Scottish city?"
Answer: London.

8. "What’s the only stroke in the ­swimming medley that doesn’t begin with the ­letter B?”

9: "What bird is most associated with the sound twit-twoo?"

10. "In the EU, a surplus of wine is named after what geographic feature."

Catch up on latest episodes of The Chase on BT TV via the ITV Hub app.

[Read more: Bradley Walsh's 9 most memorable moments on The Chase]