Fiona Bruce shuns social media because of the vitriolic abuse that she has seen unleashed on fellow female celebrities.

Newsreader Fiona Bruce has hit out at the "large number of men" making misogynistic comments online and revealed that she enjoys a cocktail before presenting the BBC's 10 o'clock news.

The Antiques Roadshow presenter, 50, shuns social media because of the vitriolic abuse that she has seen unleashed on fellow female celebrities.

She told Radio Times magazine: "I'm astonished at the freedom with which a depressingly large number of men feel they can just say what they want and write the most hideously misogynistic stuff about women."

The mother-of-two added: "I look at my daughter and think, 'God, I didn't think this was coming your way.' I really didn't. The misogyny on the internet is a whole area that you and I would never have thought was coming."

Fans of the famously poised newsreader might be surprised to find her admit that she enjoys a drink at a bar before presenting BBC News At Ten.

Bruce said that she loves working from the BBC's new headquarters in central London "because if I'm doing the six o'clock and 10 o'clock bulletins, I can slip out in-between to the Langham hotel bar across the road and have an evening cocktail."

Asked whether she was concerned about staying sharp after having her drink, she replied: "I only ever have the one."

The glamorous presenter, who arrives five hours before the six o'clock bulletin to discuss the running order, help decide a story angle and write her own links, said that she is surprised that her appearance has been scrutinised to such an extent, and she "couldn't believe it" when comments she made about dying her grey hair were brought up with then BBC director-general George Entwistle by John Humphrys on Radio 4's Today programme. 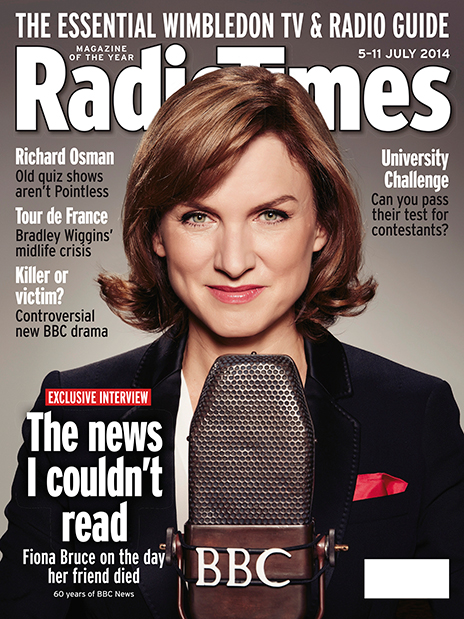 She told the magazine that while male presenters were also easy on the eye, they were judged differently.

"They're all good-looking men - I can't think of a male presenter who isn't a good-looking bloke - but, you know, they're not judged by their suits and ties," the former Crimewatch presenter said.

Bruce, who points out that she was "the only one who was fully clothed" when she ranked 98th in FHM's Sexiest Women list five years ago, still finds it strange that people stop her in the street to say they do not like a particular jacket, telling the magazine: "You think, 'I really don't like what you're wearing either!'"

The former Newsnight reporter dismissed any possibility of returning to the current affairs programme to take over from Jeremy Paxman, saying: "It's not on my radar. I haven't even thought about it.

"I love doing the six and the 10; it has a huge audience, so that's quite a big thing to give up, that big an audience," she said, adding that she would still like to become a magistrate when her broadcasting career ends.

But Bruce said that getting older had never prompted her to worry about losing her job.

"I don't mean to sound self-important or conceited. I just wasn't feeling insecure.. and no-one in anything I do had given me any reason to feel like that," she said, adding: "I mean, when the axe falls, it will be swift, and I will read about it in a newspaper before I will get told by the BBC - that's just life."

Bruce said that the sudden death of her close friend, Sky TV executive Nick Milligan and his eight-year-old daughter Emily, in a motorboat accident in Cornwall last year made her want to celebrate life rather than worry about getting old when she turned 50 in April.

The BBC asked another presenter to read the news when the accident appeared on the story schedule because Bruce was devastated.

But she said that when it came to her birthday almost a year later "I wanted to dance until I dropped."

"Because such a very, very good friend of mine died very young, far from being sad about the fact that I'm 50, I think: 'Hurray, I'm 50 - and I'm still here,' she told the magazine.

"There's nothing like that to put everything else into perspective. So there was no existential angst at all. It was all just a joy."