The show’s writer and producer talk to BT TV about hidden Easter Eggs, the difficulties in adapting the book and the genius of Terry Pratchett.

Who knew that the end of the world would be so wonderful? Good Omens, Terry Pratchett and Neil Gaiman’s novel about the apocalypse, is streaming now on Amazon Prime Video and coming soon to BBC Two, and it’s a glorious and magical mini-series.

David Tennant and Michael Sheen are a hoot as unlikely best buddies Aziraphale and Crowley and the weird, majestic and wonderful world of Terry Pratchett has finally been captured on film – something which was previously considered impossible.

Hit play above to watch Neil Gaiman and Rob Wilkins on the making of Good Omens.

The duo discuss the lengthy process of adapting Good Omens, which was originally going to be a film adapted by Terry Gilliam, and the possibility of more Pratchett adaptations.

[Good Omens - Secrets from the set]

Wilkins, Pratchett’s long-term friend and business partner, revealed that more Pratchett adaptations are in pre-production and shooting this year, but said that there would be no rush to bring his entire works to TV.

Good Omens is available to stream in full on Prime Video now. It arrives on BBC Two on Wednesday, January 15 at 9pm.

> Got BT TV? Sign up for Prime Video through your TV box 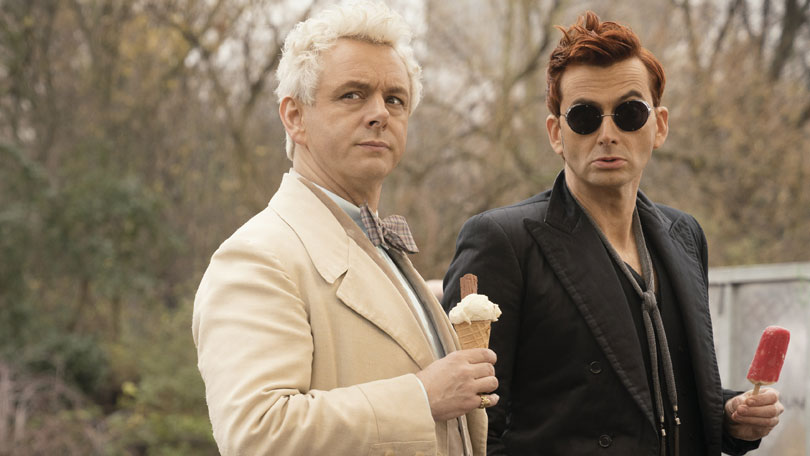 The End of the World is coming, which means a fussy Angel (Michael Sheen) and a loose-living Demon (David Tennant) who’ve become overly fond of life on Earth are forced to form an unlikely alliance to stop Armageddon. But they have lost the Antichrist, an 11-year-old boy unaware he’s meant to bring upon the end of days, forcing them to embark on an adventure to find him and save the world before it’s too late.

Unlikely friends Aziraphale and Crowley are the stars of the series – one, an angel and rare book dealer known for his fussy nature, the other, a fast-living demon.

The pair have been living amongst Earth’s mortals since The Beginning and have grown very fond of their existence there, as well as of each other.

But Heaven and Hell have other plans for them, as they’ve decided that the world will end next Saturday, just before dinner, something neither of them is very happy about.

The armies of Good and Evil are amassing, Atlantis has risen, and the Four Horsemen of the Apocalypse are ready to ride…but could something halt the destruction?

Someone seems to have misplaced the Antichrist, and there’s no way Aziraphale and Crowley are going down (or up) without a fight.