Jack Ryan season 2: When is it released? Who is in the cast? How to watch in the UK

John Krasinski is back as the Tom Clancy hero for another nail-biting series of action and adventure on Amazon Prime Video.

Jack is back. Amazon Prime Video’s all action CIA hero Jack Ryan, played by John Krasinski (The Office, A Quiet Place) returns on November 1 for a second season of globetrotting, nail-biting, edge-of-your-sofa adventures.

Based on the classic Tom Clancy novels, but updated for 2019, Jack Ryan is the classic all-American hero with a modern twist.

After quashing a Syrian terrorist attack and a threat to the President’s life in season one, Ryan has climbed up the ranks and earned the respect and friendship of his boss James Greer (Wendell Pierce).

At the end of season one, Greer landed a new job in Russia and offered Ryan a chance to stay in the field working for him in Moscow. But it will be Venezuela where Ryan and Greer team up again as their two different missions collide in the hostile environment of a Presidential election.

Here, we reveal everything you need to know about Jack Ryan season 2 on Amazon Prime Video.

When is Jack Ryan season 2 released?

The second season of the fan-favourite action thriller is released on Friday, November 1st on Amazon Prime Video.

How many episodes are in season 2? 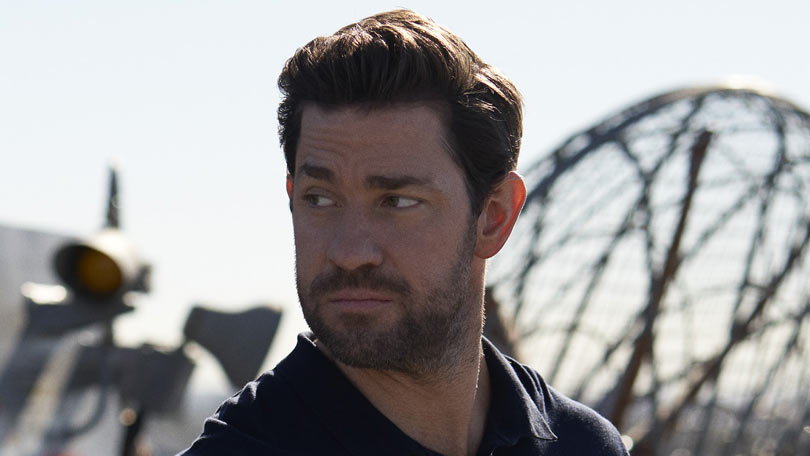 The second run of Jack Ryan has eight relentless episodes of action, tension and shocking twists.

What do we know so far about Jack Ryan season 2? 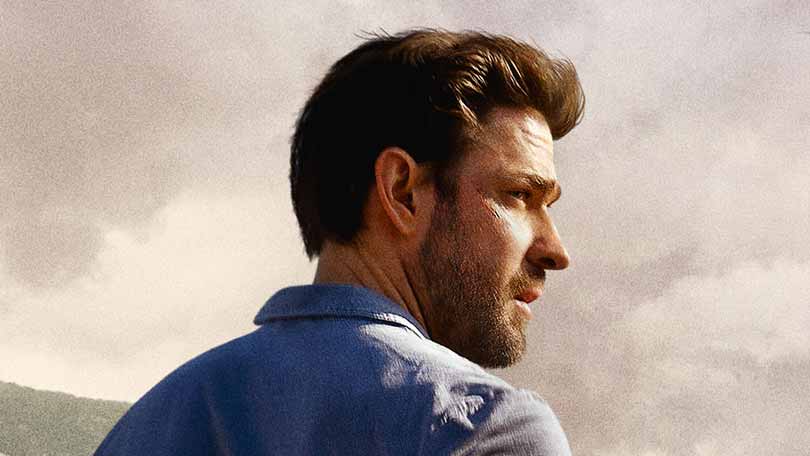 In the second season of Tom Clancy’s Jack Ryan, after tracking a potentially suspicious shipment of illegal arms in the Venezuelan jungle, CIA Officer Jack Ryan, portrayed by Krasinski, heads down to South America to investigate.

As Jack’s investigation threatens to uncover a far-reaching conspiracy, the President of Venezuela launches a counter-attack that hits home for Jack, leading him and his fellow operatives on a global mission spanning the United States, UK, Russia, and Venezuela to unravel the President’s nefarious plot and bring stability to a country on the brink of chaos.

Jennifer Salke, head of Amazon Studios, said: "The new season will take our unexpected hero to a new, exciting and dangerous world."

Speaking about how Jack has changed since season 1, Krasinski told Entertainment Weekly: "This is a guy who very openly stated, 'Here's all the work. Go get the bad guys. I don’t want to be a part of it'.

"But now his eyes have been opened and he can’t go back."

Talking to BT TV about the new season and the selection of Venezuela as a location, John Krasinski said: "It's characters set in the macro. The idea of setting, where you are geographically and where you are in time... It's nice for Jack to feel like a modern day hero, a current hero.

"But using Venezuela, as far as I’m concerned for Jack, I never saw it as anything political. We used it as a backdrop for sure. But the storyline really is a revenge story and trying to avenge a lost and fallen friend."

He also explained the more vulnerable side to Jack Ryan, which is visible in season two.

"One of the biggest things for me when I went to the CIA and I met the men and women who were there is that not only were they a very diverse group of people, but also they were a very normal group of people," he said.

"I mean that in the best way. You think of the intelligence community and fierce, no feeling, willing to do whatever it takes. But the truth is that they are incredibly kind, people with families and fears and with that constant narrative of ‘what if’ going on in their head when they go into the field. That’s what makes them heroes to me." 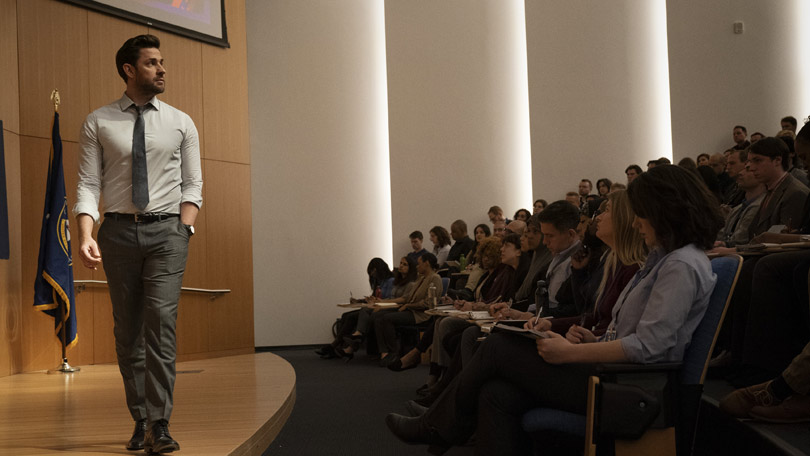 Season two ups the ante, making the first outing look like the gentle warm-up exercise before this wild sprint. John Hoogenakker (Matice) leads a covert team in an outrageous jungle mission. John Krasinski showcases his fitness in a rooftop chase across the London skyline. And Noomi Rapace is involved in a nerve-wracking cat-and-mouse storyline.

Jack Ryan season two keeps a dozen plates spinning that will have you gasping and clicking the 'next episode' button no matter how late in the evening you're watching.

Showrunners Carlton Cuse and Graham Roland spend little time exploring what Jack Ryan has experience with but rather what he is capable of and that makes for a very thrilling run of episodes. 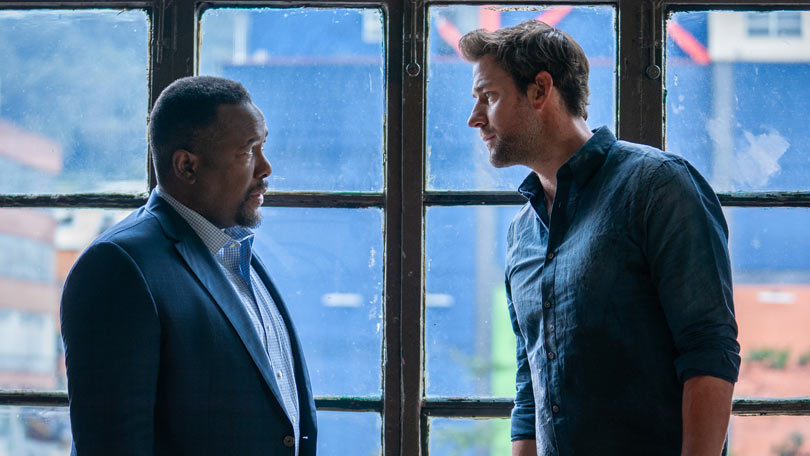 Season 2 of Tom Clancy’s Jack Ryan is an all-around improvement, one that balances character and action to deliver an entertaining and explosive binge-watch that makes the most of its talented cast. That’s particularly true of the imminently likable Krasinski, who makes Jack a more thrilling figure by focusing on his humanity, rather than his super-human exploits.

Not only does Krasinski seem more at home as the stoic hero, but the writing staff produced an engaging, multi-faceted season of television that organically connects multiple storylines. Much like Season 1, the slow-simmering mystery steadily unravels, compelling you to watch just one more episode. The new season is not only a joy to consume, but it’s also highly bingeable. I watched the final four episodes in a single sitting. 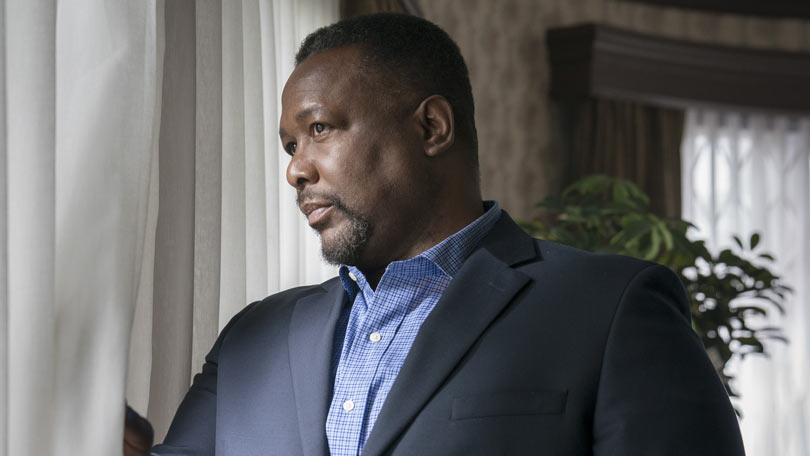 In addition to Krasinski, the second season also sees the return of Wendell Pierce (The Wire) as James Greer. John Hoogenakker is also back in a larger role as black ops operative Matice.

Season 2 will also see the arrival of Jovan Adepo (The Leftovers), who plays Marcus, a former Navy special crewman, Narcos star Cristina Umana as an aspiring politician, Francisco Denis as Ubarri, a government official and Jordi Molla (Genius) as Nicolas Reyes, a powerful and charismatic leader in Venezuela.

Abbie Cornish, who played love interest and doctor Cathy Mueller in season one, does not appear in season two.

Is Jack Ryan season 2 based on a Tom Clancy book? 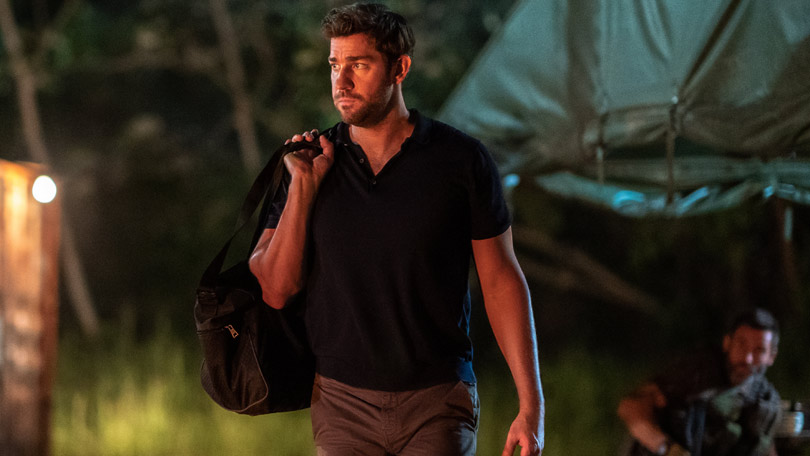 Season 1 ended with Greer transferred to Moscow to serve as station chief and he invited Jack to join him in the field.

Fans of Tom Clancy’s books will recognize the Russia connection, because the analyst frequently battled against the Russians during the Cold War.

However, season 2 actually has a stronger focus on South America, where Jack will be dealing with a declining democratic regime.

This could mean the new episodes will have a loose connection with the classic Clancy novel Clear and Present Danger, which pitted Jack Ryan against South American drugs cartels.

SPOILER ALERT: Will James Greer make it out of season two alive? 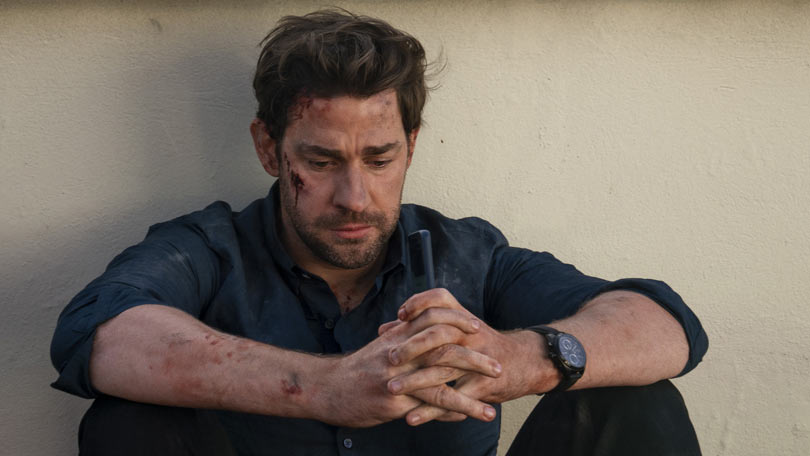 If the series is influenced and loosely based on Clear and Present Danger, there is one large elephant in the room. The fate of James Greer.

In the Tom Clancy novel, Greer dies from pancreatic cancer. Will the writers of Jack Ryan keep that element of the story and bump off Wendell Pierce's character in season two? Or will they choose to steer away from that part of the story?

In the trailer, Greer is shown struggling in an action sequence, bleeding and being lifted off the floor by Jack. Speaking of trailers...

Additionally, travelers flying into LAX Airport in September will be greeted to ‘Jack is Back’, a 50,000 square foot rooftop billboard marking the largest rooftop advertising placement of all time.  The rooftop billboard is illuminated, allowing travelers to view the signage any hour of the day or night.

Will there be a season 3? 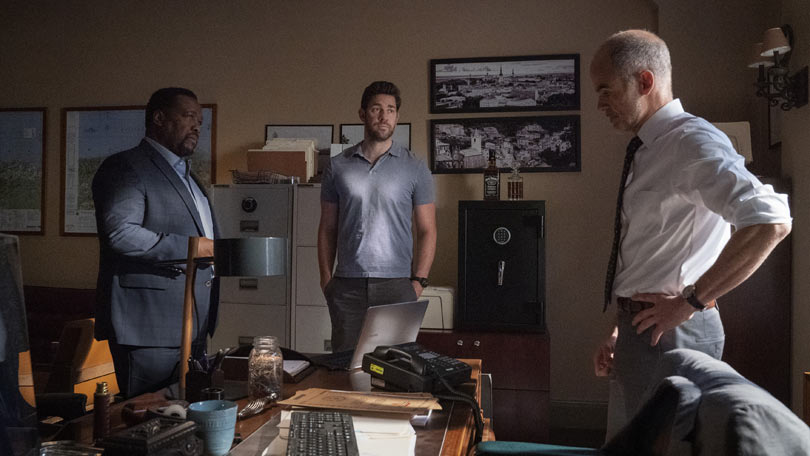 There is no sign of Jack Ryan ending any time soon. Amazon confirmed in early 2019 that they had already given the green light to season 3.

Krasinski’s third outing as the CIA Officer is expected to be released in 2020.

Jack Ryan will also have a new showrunner for season 3. Prison Break creator Paul Scheuring will replace Carlton Cuse on the production team

How to watch Jack Ryan season 2 in the UK 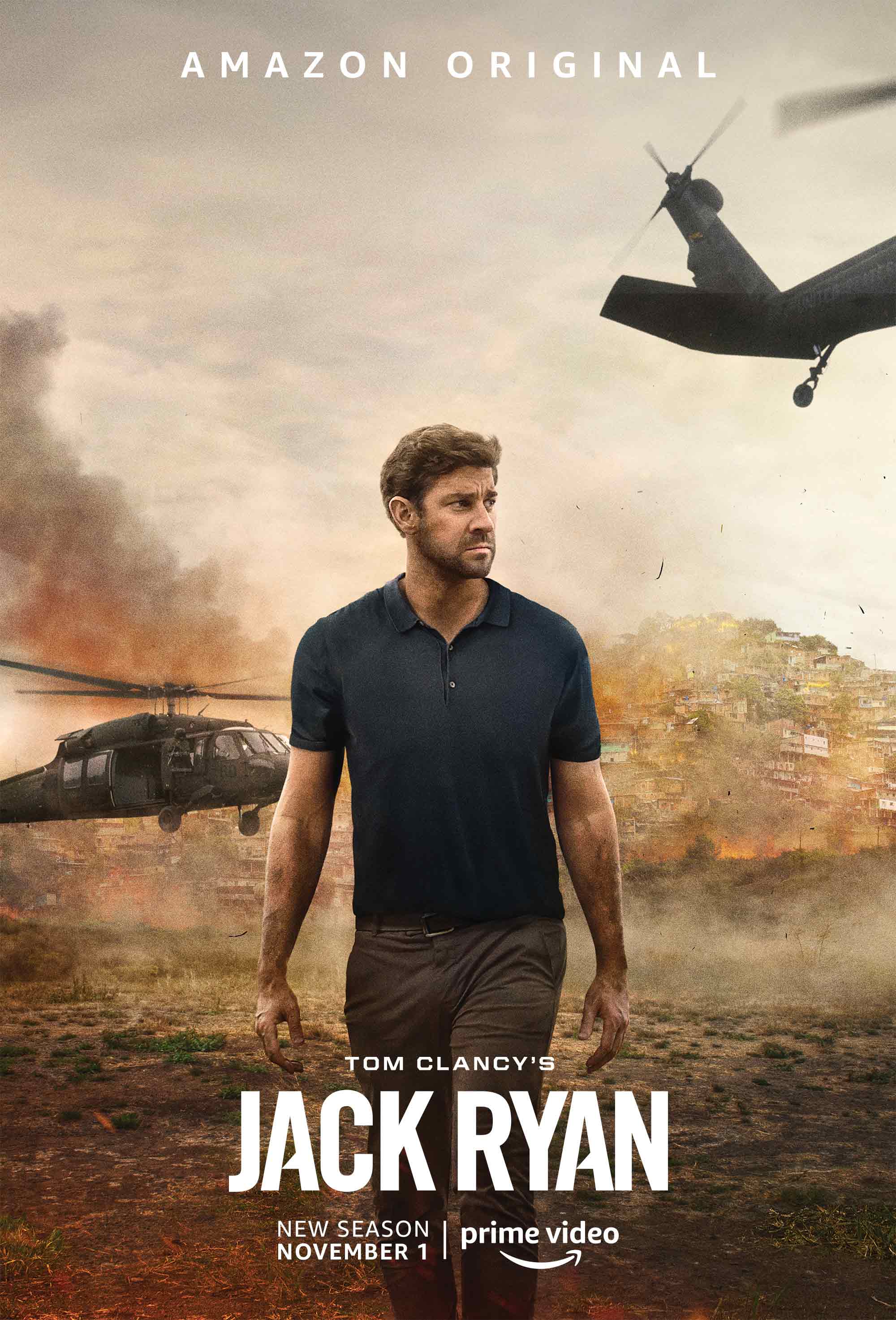 Amazon Prime Video has an incredible library of classic TV series and movies and award-winning acclaimed Originals including The Grand Tour, The Marvelous Mrs Maisel, The Boys and Good Omens.

Find out how you can watch Prime Video with BT TV >