Hap and Leonard, the new six-part event series from AMC, premieres on BT TV on Tuesday, March 7th at 9pm. 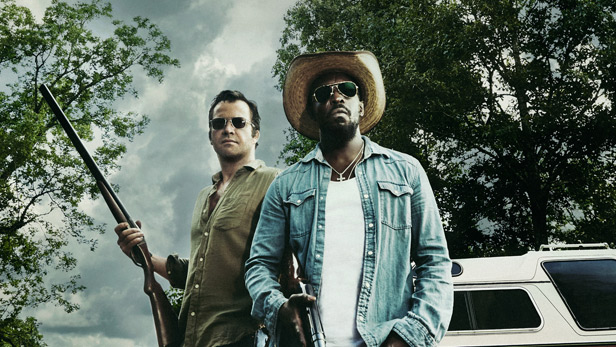 Where are you from, and what’s it like playing a Texan?

I am from East Flatbush, Brooklyn, New York. It’s hot playing a Texan, very hot. The dialect, the specific type of twang in their speech, is very specific and cultural. The swagger, the clothes, the cowboy hats, cowboy boots, jeans and T-shirt – it’s all American, and it’s really fun to play.

How would Leonard Pine describe himself?

Leonard Pine would probably describe himself as an oddball. He sticks out. I think he’s okay with that.

What drew you to this character?

The main things that drew me to the character were the writing and the relationships, primarily the one between Leonard and Hap. The friendship, the brotherly love that they share, is like a bromance. A lot of stuff is going on, but the writing is really cutting-edge.

You and James have known each other for a while.

James is a very dear friend of mine; I love him to death. We first got a chance to work together on a project that we filmed in South Africa. We trolled around Capetown and had a lot of fun. I always felt it was unfinished business between him and me, so I was really happy that we were able to reunite for this.

Is there anything you love to hate about Leonard?

The thing I love to hate about Leonard is his inability to show emotion. Men don’t cry, and then he being a black gay man, he really can’t cry, so I hate the fact that he feels he always has to put on this tough show. He never feels like he can be vulnerable around people. Probably the only person he ever feels he can be vulnerable in front of is Hap.

Who is Trudy to Leonard?

Trudy is to Leonard what salt is to a wound.

[Read more: Christina Hendricks Hap and Leonard interview - No one is safe in this show]

What kinds of obstacles will Leonard face this season?

One of the obstacles Leonard faces is trusting others. He also deals with racism and homophobia. There are a lot of derogatory racial statements and homophobic lines thrown at him throughout the season. He has to rise above that to stay alive.

If you were to drop someone in the world of Hap and Leonard, what is the essential piece of advice that you would give them in order for them to survive?

Run. It’s kind of a f*!$&ed up place to be. There’s a lot of racism and a lot of poverty. The show opens up with Hap and Leonard losing their jobs, so it’s not a place you want to be.

What are three words that you would use to describe the series?

When does Hap and Leonard start?

Series one premieres on AMC in the UK on Tuesday, March 7th.

What time is it on?

The six episode series airs at 9pm. It will also be available on BT TV Catch-Up.

How do I watch it on BT TV?

AMC is the drama channel, exclusive to BT customers. Tune it to BT TV channel 332/381 HD.

AMC is the home of Fear the Walking Dead, Ride with Norman Reedus and will premiere Pierce Brosnan's The Son and highly anticpated anthology series The Terror in 2017.

Viewers without BT TV can get a taste of AMC with the first episode of Hap and Leonard airing free-to-all on BT Showcase, Freeview channel 57.