The Terror: Infamy - From the important historical event it's based on to its big blockbuster feel - The cast reveal their top 3 reasons to watch the show

There’s a new cast, a new story, a new setting, and new showrunner for The Terror season 2 - but never fear, it’s as scary as ever. Here the cast discuss the appeal of the second series.

The Terror is back for season 2, but don’t expect to see Jared Harris in a Royal Navy uniform, a murderous polar bear and further treacherous expeditions to the Arctic.

Because while the next installment of the anthology series The Terror - called The Terror: Infamy - shares some DNA with its predecessor, it looks and feels completely different.

It's based on a completely different historical event: it is set in the Japanese American internment camps in World War II, and boasts a cast and crew primarily of Japanese American descent, including George Takei, Derek Mio, Kiki Sukezane and Naoko Mori.

Speaking exclusively to BT TV, the show's lead cast reveal their top 3 reasons to watch - from the big blockbuster feel that it inherits from Ridley Scott's influence over season 1, to the accurate depiction of life for Japanese Americans in the camps at the time, to the tone of the horror that runs throughout the series.

The Terror: Infamy airs on AMC in the UK – the drama channel exclusive to BT TV customers.

> How to watch AMC on BT TV

1. It’s based on an important historical event 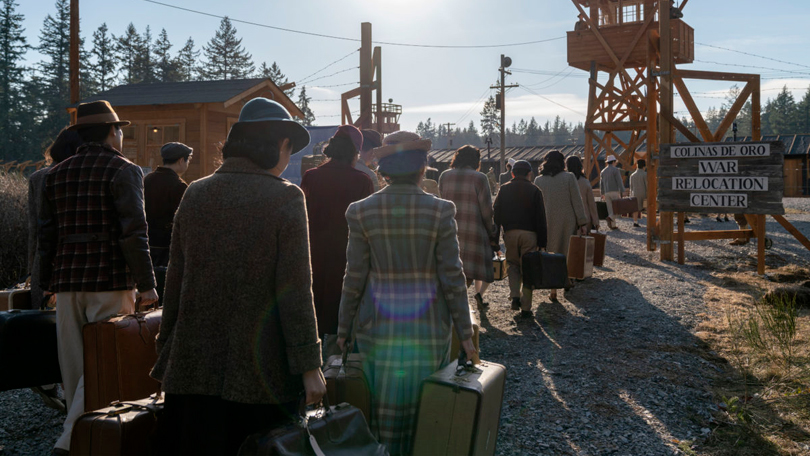 Like season 1, The Terror begins with a historical element and layers chilling horror tonally on top. Season 1, for example, centered on the Royal Navy's perilous voyage into the discovery of the Northwest Passage.

However as it's an anthology series, meaning the story changes each time, season 2 is not set in the same Arctic wastes.

During the Second World War, shortly after Imperial Japan's attack on Pearl Harbor, US President Franklin D. Roosevelt ordered the forced relocation and incarceration of hundreds of thousands of Americans of Japanese descent - including The Terror: Infamy's own star, George Takei.

“When I was a teenager, I had many after-dinner conversations with my father about our internment. He told me that after we were taken away, they came to our house and took everything. We were literally stripped clean”
~George Takei pic.twitter.com/2seC2wBPT2

Showrunner Alexander Woo (True Blood, Manhattan) tells BT TV that it was important for the historical elements of the show to be accurate, as they couldn’t assume that viewers have any prior knowledge about the camps at all.

He explains: “It was very important for it to be accurate because there’s a wide range of awareness about the Japanese internment camps. There’s going to be some people who weren’t even aware that it existed, that it even happened at all, and others whose families lived through it.

“At both ends of the spectrum, we wanted to honour the memory of what some people’s families went through and also give others who aren’t aware of what happened, their first visual representation of what it looked like.”

He adds that the show’s writers were as accurate as they could possibly be, but as they made the conscious decision not to replicate an actual internment camp, the one in the show is fictitious.

"But the events, the historical signposts, are all completely real.” One of those incarcerated in the camps was a young George Takei, who at the age of five was forced to live in the converted horse stables of Santa Anita Park, California, before he was sent to the Rohwer War Relocation Center internment camp in Rohwer, Arkansas.

As a consultant on the show, Takei - whose most famous role is Sulu in Star Trek - worked closely with the executive producers to ensure the accuracy of historical events and storytelling. Plus, as a cast member - he plays a community elder called Yamato-san - he inspired his fellow actors.

Takei’s stories of life in an internment camp influenced many stories in the script - which you'll see in the show. Woo, above with Takei, explains: “He was a consultant, and a lot of the stories from his childhood, we’ve put in the show so in that some of the storytelling is shaped by his personal experience.

“But also, as a leader of the cast, he brought a passion and energy to the entire set that everyone fed off of. Really within a couple of weeks everyone felt like we were doing something really special.

Having George Takei on set meant he would often point out inaccuracies with scripts, props, costumes, and the like, that reflected Japanese American culture at the time.

Takei explains how he took the show’s writers to the Japanese American National Museum and eventually sourced one of the show’s props, that you'll see on some of the women's costumes.

He tells BT TV: “Well initially I sat with the writing team, I had many conversations with them and shared a great deal of the work that I had been doing to raise the awareness [of internment camps].

“We founded a museum called the Japanese American National Museum and I took [the writing team] to the museum... we had the manager of collections to bring out various items that were produced while we were imprisoned, and other objects of interest.

“For example, we have a large collection at the museum of beautiful, carved wooden figures of birds, and they were painted with nail polish.

“Women produced these little figurines that they wore pinned to themselves as kind of ornamentation, and we asked the ladies that made these birds ‘why did you make them? What inspired you?’ and they said ‘the birds flew over the barbed wire fence [of the camps]. They represented freedom.’

“They did a beautiful job of creating them, so a whole load of those birds were brought out [for the costumes], and other artefacts were created while we were incarcerated.”

TOMORROW! What is a concentration camp? Join actor and activist @georgehtakei and JANM Chief Curator Karen Ishizuka in a discussion of the use of the term “concentration camp” and why JANM came to use it. RSVP at JANM.org 📷: Toyo Miyatake Studios #NeverAgainIsNow

A post shared by Japanese American Nat'l Museum (@jamuseum) on

Speaking of costumes, Kiki Sukezane - who plays the restless ghost Yuko Tanabe in the show - says she often pointed out inaccuracies with her costumes, notably her wig.

She tells BT TV: “I pointed out a lot. We were trying to be authentic as much as possible, especially for the kimono and the wig, so for wigs they did an amazing job, but then I was like ‘also, I know about wigs a little bit as well’ so we were pointing out little details.”

Her character also wears a variety of kimonos in the show, and she was relieved to arrive on set to find there was someone to help her wear it.

She says: “They made original kimonos for the show and it’s so detailed and beautiful, they made about 10 kimonos of each kind, because it gets dirty so badly.

3. Like the first season, it has that big blockbuster horror feel 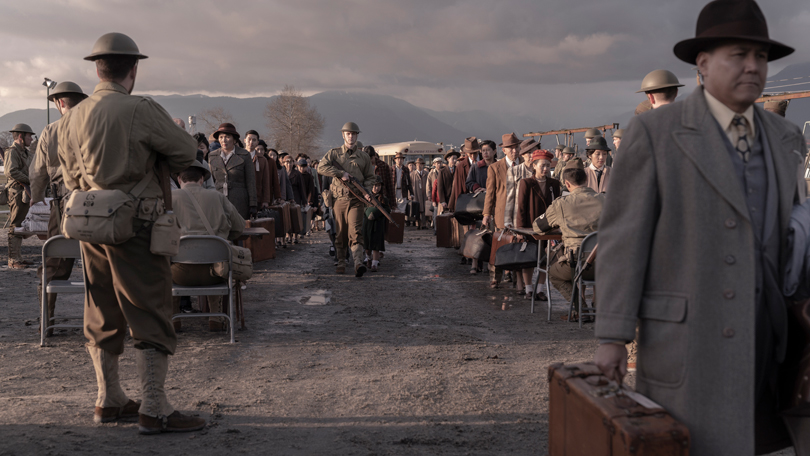 Fans of season 1 of The Terror will recall that the show was praised for its big blockbuster feel, which you would expect when you have Ridley Scott as a producer, whose previous work on the big screen includes The Martian, Gladiator, Black Hawk Down.

Luckily, Scott is back on board for season 2, which means a return to the incredible cinematography for which he is known - plus hia plentiful experience in post-production and special effects.

Of's Scott's influence on the show, Woo tells BT TV: “I worked with the television teams specifically, under [Ridley Scott’s] guidance, so David Zucker and Jordan Sheehan, who also exec produced the first season, so there very much is that cinematic feel that Ridley brought to the first season that he bought to the second season as well.”

He continues: “We’ve been the beneficiaries of some genius production designers, cinematographers and directors, so it looks really cinematic.

“They’ve built a 1940s world that is not just in America but overseas, out of [filming in] Vancouver, British Columbia, which is a very modern city. That was no small feat.”

Building The Terror’s vast internment camp set out of Vancouver was the task of the show’s production designer, Jonathan McKinstry, who returned to season 1 after creating season 1’s mammoth Arctic set.

Woo tells us: “Luckily we were blessed with an extraordinary design team. Our production designer was inherited from the first season - Jonathan McKinstry - and some of the genius work he brought forth in season 1, he brings again in season 2.”

Derek Mio - who plays a budding photographer named Chester Nakayama, below with Takei - says that the cinematography of season 1 was part of the show's appeal for him.

George Takei and his family were thrown into a Japanese American internment camp during World War 2, as was my grandfather and his family. Working on a mainstream television show that tells this story has been a surreal experience. So grateful for this opportunity and trying to cherish every moment. Season 2 of The Terror coming soon to AMC!

He tells BT TV: “In terms of the set, we had Jonathan McKinstry who was the production designer from season 1 of The Terror and that’s what drew me into season 1, it felt so real and you could feel the texture of that season, and Jonathan brought that into our show every day for sure.

“Every time we entered a new set we were all so amazed at what he had created in such a short period of time. It’s so helpful in transporting us to that time period.”

George Takei agrees that the production element of the show was astounding. He says: “The set, the researchers, the designers, they did an amazing job of research on their own, with old photos, etc.

“The reproduction of the barracks [was] built on six and a half acres, they recreated the internment camp. It was amazing.”

So it might have that big budget appeal, but is it as scary as season 1? Well if you’re looking for another monstrous spirit animal - like the Tuunbaq from season 1 - you won’t get that here, as it’s a different type of horror. Different, but still scary...

Alexander Woo explains how the horror differs from the first season: “We share a little bit of DNA with The Terror season 1, we’re both horror-themed shows with a historical backdrop.

“In our case, the type of horror we’re doing is Japanese Kaidan, or ghost stories. You might be more familiar with it from the Japanese horror movies that have been descended from those Kaidan, such as The Ring, or The Grudge, or Dark Water. We use that style to tell our story.”

In the first scene of season 2, a woman collapses, dead, after attacking herself with a chopstick. The Atlantic calls it “perhaps the most viscerally frightening scene” of the entire series, and we’d have to agree.

Putting that scene right at the start of the show set the scene for the remainder of the series. Woo explains: “I think [the chopstick scene] was a bit of a calling card for the show: ‘this is the show you’re gonna get’.

“It’s going to be very lush, very precise, visually a treat for the eyes but also deeply unsettling. Simultaneously beautiful and horrifying.”