Episode one from season five is one of Black Mirror's most creative episodes ever and is a spiritual successor to San Junipero.

Black Mirror season 5 starts with an episode, which looks destined to be ranked somewhere near the top of the anthology series’ greatest moments.

A spiritual successor to the much-loved San Junipero, Striking Vipers tells the story of two estranged college friends who reunite at a birthday party and rediscover their old close bond over the beat 'em up computer game Striking Vipers.

Danny (Anthony Mackie) and Karl (Yahya Abdul-Mateen II) hardly speak anymore in the real world as they've shifted into different lives as a family man and a high-flying executive who spends his spare time on dating apps.

However, when they test out a new VR update of Striking Vipers, which transports them into the bodies of the characters they’ve controlled for so many years, their relationship is suddenly changed forever.

The pair suddenly find themselves in a passionate VR romance as the characters Roxette and Lance, which is far more exciting than their stale suburban lives.

Here is everything you need to know about Striking Vipers…

Review – One of Black Mirror's greatest ever episodes? 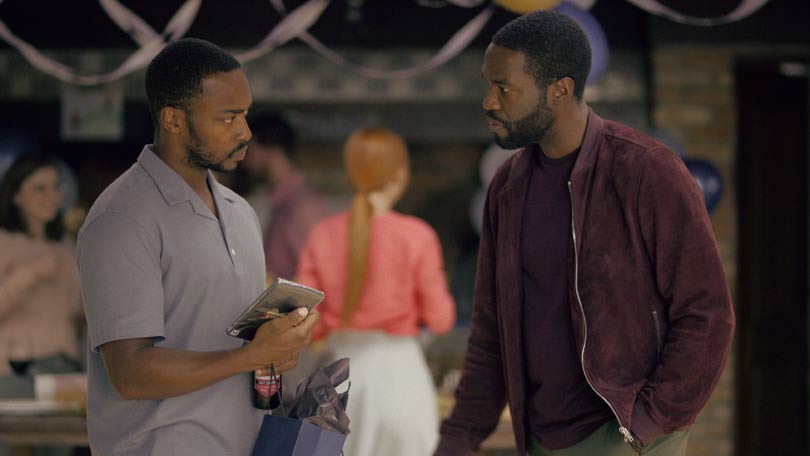 Touching on subjects as diverse as loneliness, addiction, VR technology, male depression and sexuality, Striking Vipers is a complex and densely packed 60+ minutes of television.

The moment where Danny and Karl finally kiss in the real world and claim that they don't feel anything for each other is inconclusive, offering the subtlest hints in their gaze and reactions that perhaps they're still unwilling to admit to their true feelings or explore them.

Like San Junipero, the standard Black Mirror tech-horror tone is less prominent, focussing instead on the relationships and emotional struggle of the two main characters. At one point, it even looked like Danny and Karl might go full San Junipero and leave their everyday lives for a virtual one.

A wild take on the classic mid-life crisis, love triangle storyline, Striking Vipers takes the moral panic around modern computer gaming like Fortnite and brings it into a more traditional family drama about fidelity.

Danny's attempts to go cold turkey on Striking Vipers was thwarted when Theo invited Karl over for dinner. The pair's tense reunion ends with them agreeing to meet and explore whether their feelings transfer into the real world.

The showdown between the pair ends in a street brawl. They insist that they don’t feel anything when they kiss in real life, but as they scrap on the streets, their violence resembles the physical passion of Roxette and Lance in the computer game.

When Thea comes to pick up Danny from the police station, he confesses what has been going on with Striking Vipers and Karl.
However, this isn’t the end of the episode.

It's revealed during the closing credits that Theo opted to stay with Danny, despite his gaming infidelity and has even allowed him to have one yearly game of Vipers. In return, Theo gets to spend the same one-night-only meeting a stranger of her choosing in the real world.

Hidden secrets, Easter Eggs and moments that you might have missed

- The Striking Vipers game uses TCKR VR, aka Tuckersoft. The gaming company, which we saw in its early stages in Bandersnatch.

- TCKR is also the company that developed the San Junipero virtual universe, where people can live after they've died.

TCKR System has alluded to same company from San Junipero and the game company Tuckersoft from Bandersnatch, the company's title is mentioned in Metalhead and Black Museum. In the episode, Karl gives Danny a VR grain made by the same company. pic.twitter.com/jR6sNqQOel

- The gaming technology used in the game is also the same VR system we saw in USS Callister.

- The episode is directed by Owen Harris, who previous Black Mirror episodes were San Junipero and Be Right Back. The tonal similarities between the three episodes and the themes they explore are striking.

- Striking Vipers is created by the SaitoGemu videogame company, who we first saw in the episode Playtest.

- Did you spot the name of the chocolate bar that Thea handed Danny was called Lacie. Can it be a coincidence that Bryce Dallas Howard's Nosedive character is called Lacie

The second one, in Danny's birthday, his wife, Theo, gaves him a chocolate bar named Lacie. It alludes to Nosedive's main character Lacie Pound, portrayed by Bryce Dallas Howard. pic.twitter.com/WCBjnJGVda

- It might be stretching things, but one of the characters in Striking Vipers is a polar bear named Tundra. Could it be a cheeky nod to the episode White Bear?

Mackie is best known for playing Falcon in the Marvel Cinematic Universe, including the films Avengers: Age of Ultron, Ant-Man, Infinity War and Endgame.

He also starred in The Hurt Locker and 8 Mile with Eminem.

In 2020, he will star in the second season of Netflix's Altered Carbon.

Best known for playing Manta in Aquaman, Yahya has also starred in the The Greatest Showman, Baywatch and First Match.
Earlier this year, he also starred in Jordan Peele’s latest horror Us.

Beharie is a singer and actress, who you may recognise from the films American Violet, Shame and 42.

She also starred in the hit supernatural TV series Sleepy Hollow for 50 episodes as Abbie Mills.

Pom plays the kick-ass computer game character Roxette, who is controlled by Karl in the episode.

The French actress is best known for playing Mantis in the MCU films Guardians of the Galaxy Vol 2, Endgame and Infinity War.

The Chinese-Canadian actor plays the fighting character controlled by Danny.

You may recognise him s Murk from Aquaman or Zack, the Black Ranger from the 2017 Power Rangers reboot.

15 minutes into striking vipers: this is so Underwhelming ma

5 minutes after: OH MY GDOELSKFKWK

when you dont think the ending of Striking Vipers is anything too special until it keeps continuing on#BlackMirror pic.twitter.com/a6MAXzTm38

Black mirror really knew what they were doing with striking vipers DURING pride month pic.twitter.com/VAPWR4dfHd

“Striking Vipers” is the best and most thought-provoking #BlackMirror of the new season by a large margin. Always nice to have a reminder of how good Nicole Beharie really is.

If you’re already a Netflix customer, press the blue YouView button on your remote, scroll across to 'Apps and Players' and then press the Netflix button.