Big Little Lies, the thrilling new TV box set available to buy and own on BT TV Store, tells the story of what happens when seemingly perfect lives hide a web of secrets.

The peaceful world of the affluent residents of a Californian town is shattered by a crime that changes all their lives – and exposes some of the very secrets they have tried so hard to hide.

In a bold move, the drama starts with the crime – a murder – without revealing either the victim or the perpetrator, then moves back in time to the events which led up to the murder.

Young single mother Jane moves into the town and community of Monterey, California, bringing with her a young son and a dark past she is trying to escape. Befriended by queen bee Madeline and reserved Celeste, Jane’s arrival in town will set in motion the sequence of events that leads to the dramatic denouement of the finale, exposing fractured relationships and lies aplenty along the way.

1. Powerhouse players – in front of and behind the camera

We’re more used to seeing Big Little Lies’ stars on the big screen than the small. The cast boasts not one, but two, Oscar winners in Reese Witherspoon and Nicole Kidman, along with an Oscar nominee in Laura Dern.

Reese plays Madeline Martha Mackenzie, a stay-at-home alpha-mum with a teenage daughter from her first marriage and a young daughter from her second. She has a contentious relationship with her ex-husband – whose child with his new wife is in the same class as Madeline’s second daughter – plus it soon appears that everything in Madeline’s life is not quite as perfect as it seems.
Nicole plays Celeste Wright, a former lawyer who is now a stay-at-home mother to twin sons with her younger businessman husband, Perry. Their marriage, it transpires, hides a devastating secret.

They are joined in the cast by Shailene Woodley, who first came into the public consciousness in 2011’s Oscar-winning film The Descendants. Shailene plays Jane Chapman, a young single mother who has just moved to Monterey with her son Ziggy, trying to escape a traumatic event in her past.

The main trio of women is joined by Laura Dern. She plays Renata Klein, a high-flying businesswoman whose daughter is in the same primary school class as the other women’s children. Renata and Madeline have a frosty, antagonistic relationship – each jockeying to be the leader of the social circle. 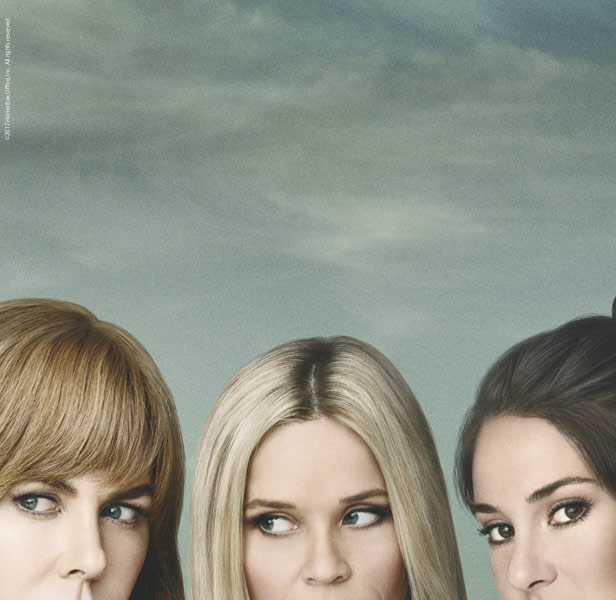 Big Little Lies’ back-to-front plot leaves viewers wanting more. Although from the very beginning we know that someone is killed at the local school’s fundraising Trivia Night - we don’t know who the victim is, or the perpetrator, until the final episode of the series.
If you can be brave enough and not take a peek online to see who is killed and who the killer is, there’s enough in Big Little Lies’ seven episodes to suggest that anyone could be the victim and the culprit.

Big Little Lies has been praised for its abundance of strong, nuanced female characters and the way that it handles the often difficult subjects it raises.

Taking in family dynamics, class divisions and social politics, everywhere from the beach to the primary school becomes a battleground. Darker themes such as domestic and sexual abuse also come into play.

While the novel was set in Australia, the TV version of Big Little Lies is set in Monterey, a small, affluent coastal town in California, about 120 miles south of San Francisco.

With stunning coastal vistas, picturesque beaches and envy-inducing houses, Big Little Lies is a treat for the eyes.
A lot of filming took place in Monterey. The dramatic coastline, including the cliffs where Jane runs, is located in Monterey. The iconic gorge-spanning bridge from the opening credits is actually Bixby Creek Bridge which soars 280-ft above Monterey’s Bixby Creek on California’s Highway 1. Monterey Bay Aquarium also makes a cameo appearance while Del Monte beach was used for many of the beach scenes.

Of all of the character’s stunning houses, only that of Celeste and her husband Perry is actually to be found in Monterey. This is located in Carmel Highlands, overlooking a wild bay.

The houses are also used to show an aspect of their owners’ personalities: hyper-organised Madeline’s Hamptons-esque perfection is the white picket fence dream taken to its extreme; there are acres of glass and angular modernism for icy Renata and a masculine-feeling eerie overlooking a tempestuous, rugged bay for Celeste, whose life is in turmoil.

These days, the soundtrack is a key part of any film or TV show. Big Little Lies in no exception.

To buy Big Little Lies press the BT Player or BT Vision button on your remote control, scroll down to TV Box Sets and browse now. Alternatively, press the blue button to search for the TV box set you want.

[Read more: What to watch on BT TV in May]

[Read more: How good a liar are you? Take our Big Little Lies quiz]