The adventurers and their son Ran spent a month alone on a desert island with their 1-year-old son Ran for a special Discovery Channel film.

"I swear to God, I could have punched him in the face". It’s probably fair to say that it wasn’t all plain sailing for explorers Ed Stafford and his wife Laura Bingham while filming their new Discovery Channel special Man Woman Child Wild.

Stafford and Bingham are their 20-month-old son Ran ditched their iPhones and tablets to live off the grid for one month in a remote uninhabited island in Indonesia.

Completely self-filmed Ed, Laura and Ran’s survival challenge, meant that they had to fend for themselves, with no idea of the water and food sources in advance, and with the looming threat of tropical storms ever present.

BT TV caught up with Ed and Laura to ask them 7 burning questions about Man Woman Child Wild...

1. Whose idea was this and who would have preferred a week in the South of France? 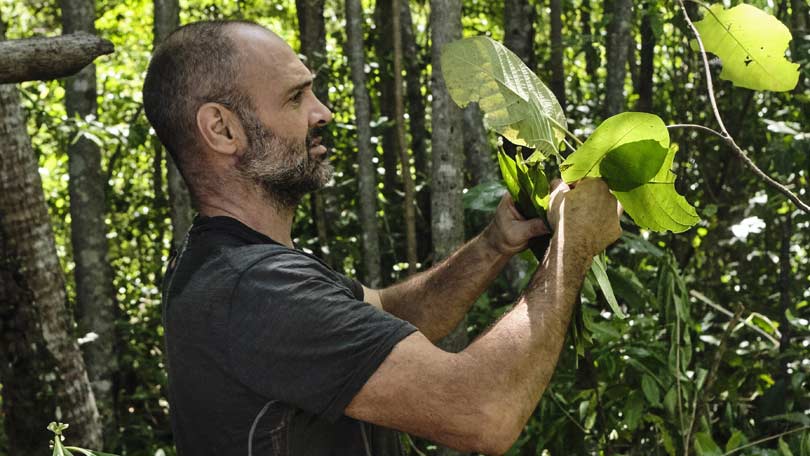 Ed: "I think I have to own up and put my hand up and say it was me. Since doing 60 days on a desert island about eight years ago, I learnt a huge amount from that experience. It was harrowing and difficult, but in terms of personal development, everything I went through then and everything I’ve done since with survival situations is inherently healthy.

"I think it’s really good to have these challenges, because it helps you evolve as a human being. But it's weird to be doing these things on your own, when I have a wife and a little boy. And if it’s good for me, I think it’s more than likely going to be good for us all as a family.

"I also have an inherent suspicion that there is a more healthy way to bring up a family. I’ve spent a lot of time with indigenous tribes and they don’t have nappies, dummies, plastic toys or televisions to dump their kids in front of. I thought, everything is pointing in this direction, let’s go away for a month and see if we see positive effects from it - with my relationship with Laura and with Ran. My suspicion is that we would.

2. How do you balance your instincts as a parent and your passion for adventure? 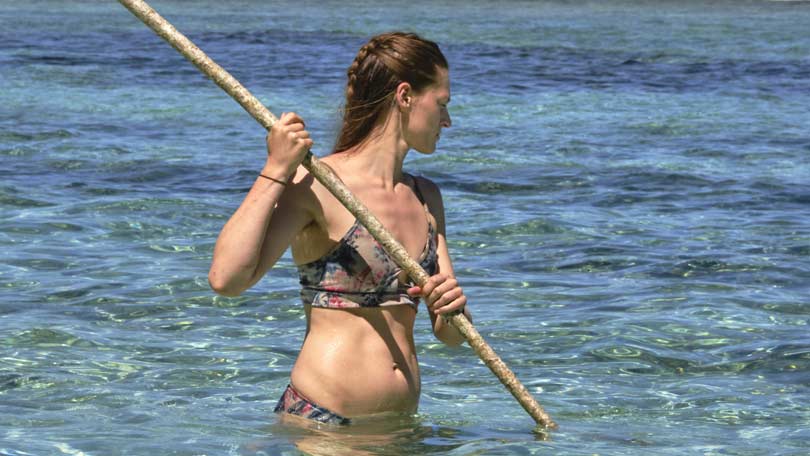 Laura: "The weird thing about this programme that I didn’t expect is that usually when I go on an expedition, I’m head down, carry on, but when we got on the island I didn’t want to let go of Ran. I just hugged him for what felt like days. I didn’t want to put him down, I didn’t think the ground was safe and Ed had to do a lot of the shelter building, searching and foraging for the 30 days because my natural instinct was to not let Ran out of my arms."

Ed: "Both Laura and I do this when we’re not on TV. When Ran was eight weeks old we took him on a road trip and slept in the back of Land Rover. When Laura was kayaking the river in Guiana last year, we both flew in to see her on a twin propellor aeroplane, landing on a grass runway in the middle of the jungle and went up the river to meet her. This is part of what we do."

Laura: "We wanted to make a show like this on TV as a group to inspire other families to have more adventures outdoors."

3. Some parents would panic at the idea of looking after kids without an iPad. How did you cope? 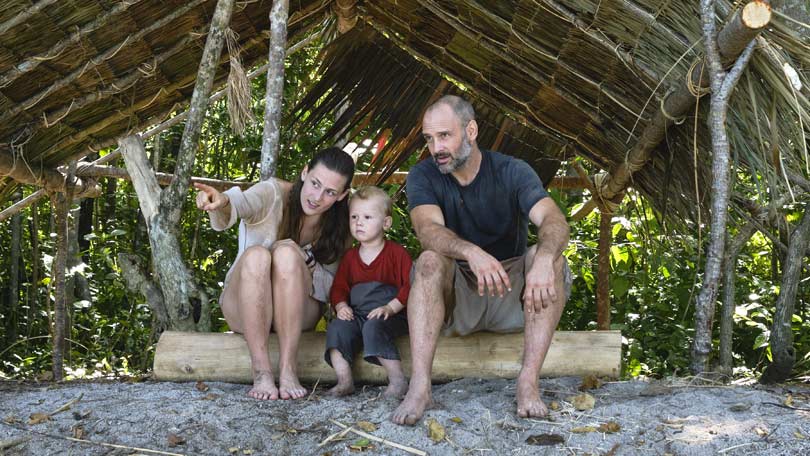 Laura: "That was a worry beforehand, that we wouldn’t have the iPad. But what was amazing was that Ran loved the crabs. The crabs were one of my happiest memories of the island. They were far more entertaining than anything on the iPad or TV. You can put them on your hand and then they put their head out… the excitement he got from them putting their head out is insane. Chasing these sand crabs, he would spend half an hour running around after them.

"I think in some ways it almost became easier because there wasn’t that crux to fall back on. Plus, the main way to keep Ran safe was to play with him. I didn’t have any jobs to do, any cleaning, laundry, washing up,  any work around the house, no emails - my sole role was to keep Ran safe and play with him. That made it so much easier than when you’re at home and you know you’ve got five other things to be doing at the same time."

Ed: "We do fall into the same trap. A weekend of looking after your kids is exhausting. We do use an iPad or iPhone like other parents. But the thing that I loved is that when he comes off watching Peppa Pig on a screen, he’s slightly restless and he can be a bit snappy and irritable. But if Laura and I dug a hole in the beach and put a load of hermit crabs in there, he was so much lighter, more engaged, his eyes were brighter, he was more playful. He was in a much better place generally"

4. Parents are often criticised about how they look after their children. How do you deal with that? 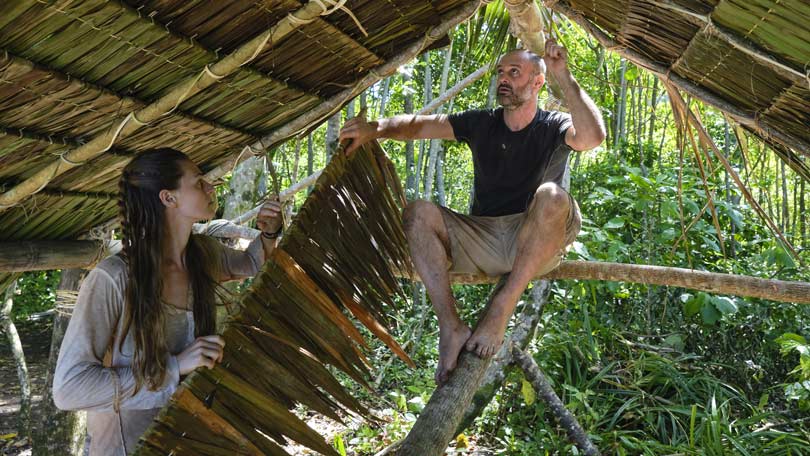 Laura: "One of my hopes for this programmes is that I want it to highlight how risk focussed we are as parents and a community. The last play centre we went to, two children got stuck on the ladder because they didn’t know how to cope with getting down and screamed for their parents. Whereas Ran was going headfirst down the slide. And I had to say to the other parents, he’s fine, he’s absolutely safe.

"I hope parents will see this programme and learn to take more risks, not molly-coddle them, don’t stop them trying to climb a ladder. I hope we inspire parents."

5. If you did it again - what would you want to take with you? 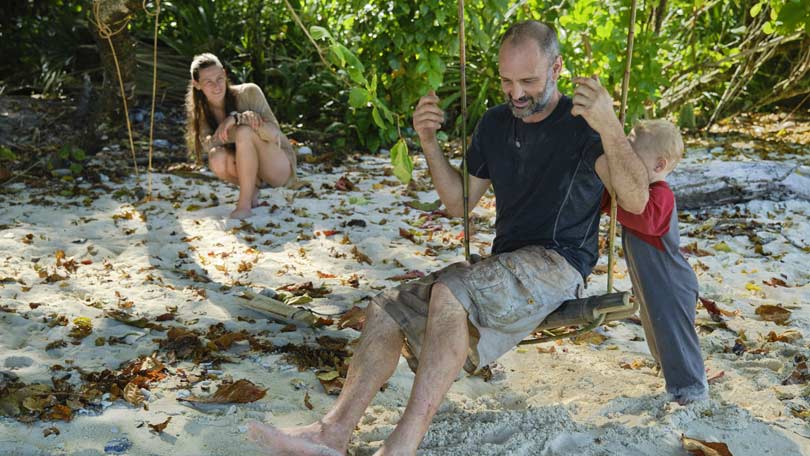 Laura: "A bed. Please. A duvet. I found sleeping on the floor one of the hardest things. I didn’t like that."

Ed: "I've already alluded to mine. I missed an extended community. That was the thing that was looking. Having your mum come around or having mates in the pub to have a Guinness with. We both assumed that we would be happy with just us and Ran, but that wasn’t quite the case."

6. What was the first thing you did when you got home?

Laura: "I think we just went to the pub? We were missing that extra companionship of friends and family, that diverse conversation. So that’s why we went straight to the pub."

7. Laura - you got very sick early on. Was that the scariest moment? 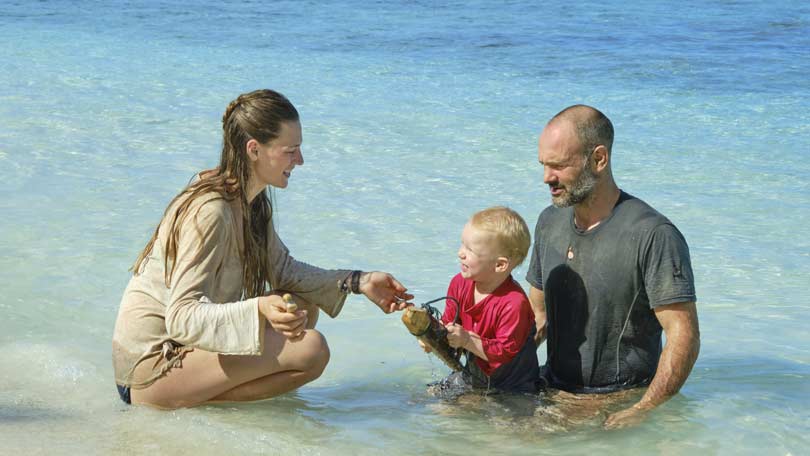 Laura: "Being sick from the water was scary, because I didn’t know the severity, but I also wasn’t scared because of all the safety plans we had ready if it got worse.

"I think the thing I found most scary was when Ed disappeared from the camp for longer than I was expecting. I didn’t know what to do. Should I call it as an emergency or is he just going to arrive on the beach again. I got really, really scared.

"It's one thing when something is happening to you, it’s scary, but when it’s happening to one of the people you love the most in the world it’s the most terrifying thing. You can’t imagine life without them and that worry that they might not come back, that moment in the film when I didn’t know whether he was coming back or not was one of the most scariest things. I swear to God, I could have punched him in the face."