Killing Eve season 2: A word-of-mouth hit, a brand new writer and rave US reviews - 5 reasons why everyone’s talking about its return

Jodie Comer and Sandra Oh return to the BBC with the second season of the hit cat-and-mouse thriller adapted from Luke Jennings’ Codename Villanelle novellas.

Killing Eve was a word-of-mouth hit, smashing ratings records when it aired on BBC America in 2018 and becoming essential viewing when it was released in full on iPlayer - only Bodyguard was more popular on the BBC's catch-up service.

The second season doesn’t currently have a UK air date, but is expected to land on iPlayer later this year, again as a box set so you can binge-watch the whole series in one go.

[Killing Eve: Everything you need to know about season 2]

With Jodie Comer and Sandra Oh both returning to their roles, and a new head writer in the form of Emerald Fennell (who takes over from Phoebe Waller-Bridge), fans are very excited about its return.

From the US reviews to awards season success, we reveal why everyone’s talking about series 2 of the cat-and-mouse thriller adapted from Luke Jennings’ Codename Villanelle novellas.

And here’s why everyone was talking about the first series, too!

Catch up on series 1 of Killing Eve now - it’s available to stream on BBC iPlayer, under the Players & Apps tab on BT TV.

Killing Eve series 2 will be available to stream as a complete box set on BBC iPlayer from Saturday, June 8.

What is Killing Eve about?

Killing Eve is based on Luke Jennings' Codename Villanelle novella series, with the first series of the spy thriller adapted for television by Phoebe Waller-Bridge (Fleabag, Crashing).

Season 1 introduced us to Eve Polastri (Sandra Oh, best known for Grey’s Anatomy), a desk-bound MI5 security officer who’s bored in her job and yearning for a more exciting life.

When a Russian politician is murdered, Eve is given the task of protecting the only witness and soon finds herself on a collision course with a psychopathic assassin known as Villanelle (Jodie Comer, Doctor Foster).

A cat-and-mouse thriller ensued as the pair raced across Europe before [spoiler alert] coming face-to-face in a thrilling climax.

Season 2 begins 30 seconds after the end of the final episode of the first season: Eve is reeling from her act of violence, and Villanelle has disappeared.

[Read more: If you loved Killing Eve - watch these shows next]

Eve has no idea if the woman she stabbed is alive or dead, and now both of them are in deep trouble.

She has to find Villanelle before someone else does, but unfortunately, she’s not the only person looking for her... 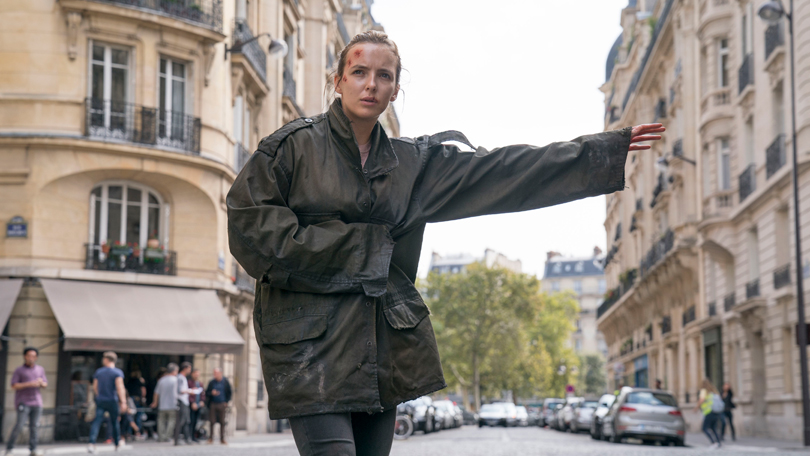 TV shows generally start off with massive premiere numbers before dwindling as a series progresses.

Killing Eve turned that on its head following its premiere on BBC America. Audience numbers grew week-by-week as fans shared their new TV love with their peers, and avidly tuned in weekly to get their next fix.

According to Deadline.com, series 1 of the show had a streak of seven consecutive weeks of ratings growth [in the adults 18-49 and adults 25-54 demographic], going back to the series premiere.

Nellie Andreeva from the site writes that it was “a first for a scripted series on television in more than a decade”.

The finale delivered a series high of 1.25 million viewers [in Nielsen live+3 ratings, up 86% from the premiere], according to Variety.com.

Airing on BBC America mid-way through 2018, before being available as an eight-episode box set on BBC iPlayer in the UK, the show shot its way to the top of 'Best of TV in 2018' lists.

It was named the number one show of the year by The Guardian, and featured in the top 10 must-watch lists from Variety, Rolling Stone and Vanity Fair.

"The reaction to season one was insane and unexpected," said Comer. "We all believed in the show and were so passionate when making it, but you can never second guess how the audience is going to take it. The response was enormous - there were some incredible Villanelle Halloween costumes and fan art.

"I've never been part of a show that’s had such an amazing reaction so it’s been lovely. It’s really nice coming to season two knowing that there are people eagerly waiting for the continuation of the story."

[Killing Eve 2 - Secrets from the set]

The critics’ darling, it’s no wonder that the first series of Killing Eve triumphed during the 2018/2019 awards season - notably for its acting.

Sandra Oh (who plays Eve) was nominated in the Best Actress category in the Golden Globes, SAG Awards and Emmys. She scooped all but the latter (pipped to the post by Claire Foy for The Crown).

The show was also nominated for Best Drama at the BAFTAs and Golden Globes, while Phoebe Waller-Bridge was up for an Emmy for adapting the novellas into the hit screenplay.

Closer to home, Liverpudlian actress Jodie Comer (who plays Villanelle) was nominated for a National Television Award for her role as the psychopathic assassin in the drama.

Killing Eve also triumphed at the 2019 TV BAFTAs, with its star Jodie Comer shedding tears as she was named Best Actress.
She beat co-star Sandra Oh to the gong and, in an emotional acceptance speech, dedicated the award to her Nana:

A HUGE congratulations to the wonderful @jodiecomer who picked up the BAFTA for Leading Actress for her role in Killing Eve, dedicating the award to her Nana ✨🥇🙌 #BAFTATV pic.twitter.com/ydd15JWJWJ

So no pressure for the team making series 2, then...

It was announced in July 2018 that Phoebe Waller-Bridge, who adapted the story so brilliantly, would be stepping down from writing duties for the second series (she was a little busy with a second series of her BBC Three show, Fleabag).

Variety announced that Emerald Fennell would be stepping up to the plate, with Waller-Bridge acting as an executive producer instead.

Waller-Bridge is thought to have been instrumental in bringing Fennell on board. The pair previously wrote material for Channel 4’s female-led comedy, Drifters.

Fennell was mainly known for her acting work (Call The Midwife, Chickens) before being brought on to write season 2 of Killing Eve. She was later announced to be cast as Camilla Parker Bowles in the Netflix period drama, The Crown.

Some fans were sceptical about the handing over of the writing reins, hoping for a return of Waller-Bridge’s signature dark wit which made the show so successful.

Why would they even bother making a season 2 of Killing Eve if Phoebe Waller-Bridge didn’t write it?

They needn’t have worried, because the reviews for series are in - and they’re just as good as the first!

Speaking about her love for the series, Fennell said: "I was a huge a fan of season one and I knew a bit about the show and its writing process from Phoebe Waller-Bridge, who is a good friend. However, nothing could have prepared me for how brilliant it was when it came out and, like everyone else, I was obsessed. We actually started writing before season one had come out, so had no idea it was going to be as popular with the world as it was with us.

"It is difficult to work on something when you are a fan. It is tempting to do what you have secretly dreamed of doing while watching it. I loved the characters so much and Phoebe was brilliant at building such a beautiful and rich world. Going in to it as someone who really loved the characters was heavenly to do."

She added: "Season one was a cat-and-mouse [game] between Eve and Villanelle, and the dynamic is still there. Eve and Villanelle are these two women who cannot help but be in each other’s vortex. The question for season two, is how the power dynamic has changed in their relationship and what it means for these women’s lives."

4. The US reviews are amazing

Season 2 of Killing Eve premiered on BBC America earlier this year, with critics praising Emerald Fennell’s version of the script.

She adds: “Just as they did in season one, [Eve and Villanelle] do it [all] with dark humour, style, and a commitment that requires the use of the adjective fierce.”

Allison Keene from Collider calls the series “just as sharp and engrossing as before”, while the key dynamic between Eve and Villanelle “remains the same”.

Basically, if you liked series one, you’re going to love series two.

5. We've waited so damn long for it

If you’re a Killing Eve fan, you can’t have missed the fact that season 2 of the show is currently airing in the States, and most people this side of the pond are up in arms about it.

A BBC spokesperson explained: "The show was commissioned by BBC America and so they have the rights to show it first. BBC public service in the UK has acquired the UK rights to the show."

#KillingEve series 3 will air exclusively on the BBC in the UK (series 2 coming soon). xhttps://t.co/knW0Znd6li pic.twitter.com/alwGW5xfvl

This means that we’ll have to wait until all eight episodes have aired in the US before we can watch them in the UK, but it does mean we should be able to binge-watch them all in one go, like we did with the first series.

In terms of airing it in the US before the UK, nothing’s changed from the first series - it just feels more prominent because nobody had really heard of the show when series 1 was airing in the States whereas now, everyone’s talking about season 2.

We predict a June 2019 box set release on BBC iPlayer, so you can binge-watch the full season to your heart’s content.

Series 1 of Killing Eve, consisting of eight episodes, is available to stream now on BBC iPlayer.

Killing Eve series 2 will be available to stream as a complete box set on BBC iPlayer from Saturday, June 8.

BT TV customers can find the BBC iPlayer app under the Players & Apps tab on their TV box.