The former T4 and Made in Chelsea presenter talks exclusively to BT TV about River Hunters, his new TV show on History with underwater treasure seeker Beau Ouimette.

Searching for hidden treasures in the depths of the nation's rivers but not spring immediately to mind when you think of Rick Edwards, but he’s hoping to change that.

Speaking exclusively to BT TV about the show, Rick reveals everything you need to know about River Hunters - including his three reasons to watch.

History is one of the extra entertainment channels available for BT TV customers, part of the BT Entertainment Starter Pack. You can watch History on BT channel number 327/379 HD.

When is River Hunters on TV?

The show will see Rick and river searching expert Beau visit historically significant sites across the UK, and through the waterways that have remained untouched for hundreds and even thousands of years.

By searching these unexplored rivers, they will reveal secrets from the major events that happened there and find treasures from the past which will bring forgotten stories to life.

Asked to describe the show in three words, Rick tells BT TV that River Hunters is: “aquatic history fun” and joked “that’ll be the new tagline!”

Rick Edwards and Beau Ouimette are the river-hunting enthusiasts on the brand new History show.

TV presenter and avid wild swimmer Rick has previously fronted shows including Free Speech, T4, the Made in Chelsea reunions, and Tool Academy.

About to get in this river #blessed🙏

River searching expert Beau has more than 1 million subscribers on his YouTube channel, Aquachigger, where he documents his treasure hunting finds from American rivers, beaches, and more.

Why oh why do I dig, dig, dig? Opening up a new cave prospect. Video to follow soon. #chiggsarmy

The show also sees the pair speak to experts along the way, including one of the UK’s few river hunters, Gary Bankhead.

Rick tells BT TV that Gary is the most interesting person he met during filming. He explains: “He’s one of the only people in the UK who is an underwater archeologist.

“He’s at Durham University, so he spends a lot of time diving around there. It’s a rarity, people just haven’t done it, and he has, so his expertise was just really invaluable.

“He was with us for quite a few episodes, which was very handy, because Beau knows a lot about the stuff he finds in America, and American history, but much less about British history, so it was good having Gary there.”

Rick added that he met an ‘interesting’ English civil war reenactor, who got him to fire a musket [a very old gun]. The reenactor was not impressed by Rick’s lack of shooting skills.

He tells us: “I’ve never held a gun before, which he was horrified by. He was a very interesting man.

“Bear in mind this is the first time I’ve ever shot a gun, and I missed the target by less than a foot, and the guy was trying to mug me off.

“He’s like ‘you missed it’. Well firstly the gun is rubbish, it’s a piece of sh*t old gun. My point was ‘good effort’, his point was ‘dreadful’.” 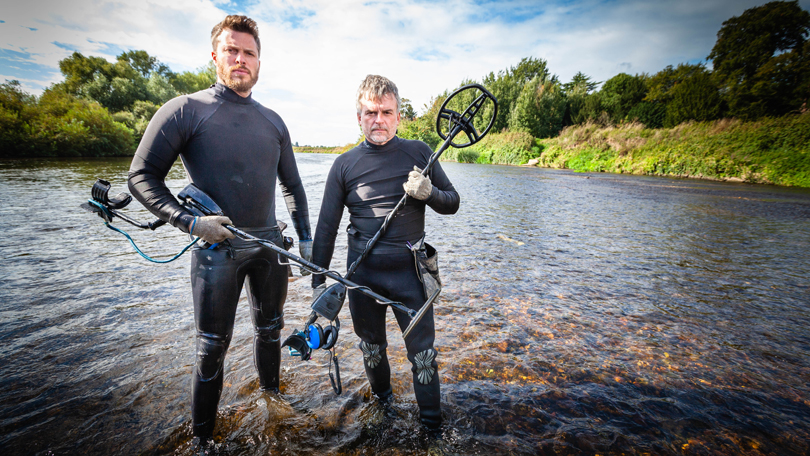 Beau and Rick are both funny blokes, and the pair of aquatic adventurers got on brilliantly during the shoot.

Rick tells BT TV: “So my number one reason, it’s a bit of fun. We really enjoy ourselves and hopefully that will come across to the viewers.

“Every scene where I hold Beau down under the water is a big highlight for me.

“And then generally just the scenes in the car with me and Beau where we’re just talking s**t are quite fun I think.”

There were also some funny behind-the-scenes moments that won’t be seen on the TV show - like when Rick wrote off the car he was driving.

“Towards the end of the shoot, it was a long shoot, and it was quite hard. I think I was very, very tired by the end, and on the penultimate day, I did write off the vehicle," he admits.

“You can see on the cameras in the car, I looked in the mirror, I don’t see the huge tree somehow even though it’s right behind us, and I just reversed straight into it. We were all fine, but the car wasn’t fine.

“That I don’t think is in the show, but you’ll see that you don’t see a view of the back left of the car for a while because it’s knackered.”

“We’re finding stuff that obviously no-one’s found before, but people just have not looked. We’re doing our best [at making history]. That was my favourite bit of the show really.”

Rick discovered some pretty awesome relics himself during filming - but sadly he wasn’t able to keep them.

He tells us: “I guess personally for me, I found a Viking gaming piece and I was really pumped. That was the best thing that I found, and also I love the Vikings. I didn’t keep it, I wasn’t allowed!

“Also I don’t really know what I’d do with it, it’s a bit weird isn’t it, and you’re not allowed to eBay these things, so I imagine it’ll end up in a museum or something which is quite cool."

Nobody likes a boring history lesson, but River Hunters allows you to discover a little bit of British history while laughing at Rick and Beau throwing themselves in rivers.

Rick says: “The third reason is, because we’re searching for evidence of a particular historical event, in an area, but because of the way stuff’s just been chucked in rivers and lost in rivers in years and years and years, there’s all these layers of history, so we’re kind of finding stuff from all different periods.

“Across the series, you really get a nice overview of stuff that’s happened on the British Isles over time.

“It’s not direct, like people are giving you a history lesson, but you still end up finding out quite a lot of stuff about what’s been going on.”

As Rick and Beau visit locations synonymous with British history, they cover iconic events and battles including the Battle of Stirling Bridge, Roman Britain, the Wars of the Roses, the Reformation and the English Civil War.

Their searches of unexplored rivers and waterways unearth treasures from the past which reveal how our ancestors used to live.

Yep! You can watch the trailer for River Hunters here:

History is one of the extra entertainment channels available for BT TV customers.