The Clinton Affair: Why the documentary exposing the truth behind the Monica Lewinsky scandal is such an important watch in the Me Too era

We reveal when The Clinton Affair airs on the History channel in the UK, who appears in the documentary, why you should watch it and why it made headlines across the pond.

It received praise on the other side of the pond for sparking new conversations around the abuse of power, and now controversial documentary The Clinton Affair is heading to the UK.

Exclusive to the History channel, the six-part documentary series about Bill Clinton’s presidency and the infamous Monica Lewinsky scandal is genuinely captivating - indeed shocking and upsetting at times - and it might make you realise you knew less about the scandal than you thought.

We reveal when The Clinton Affair airs in the UK, who appears in the documentary, why it’s an important watch in the Me Too era, why it's making headlines, and everything else you need to know.

You can watch The Clinton Affair on History (BT channel number 327/379 HD), one of the 60+ premium entertainment channels available for BT TV customers.

What is The Clinton Affair about? 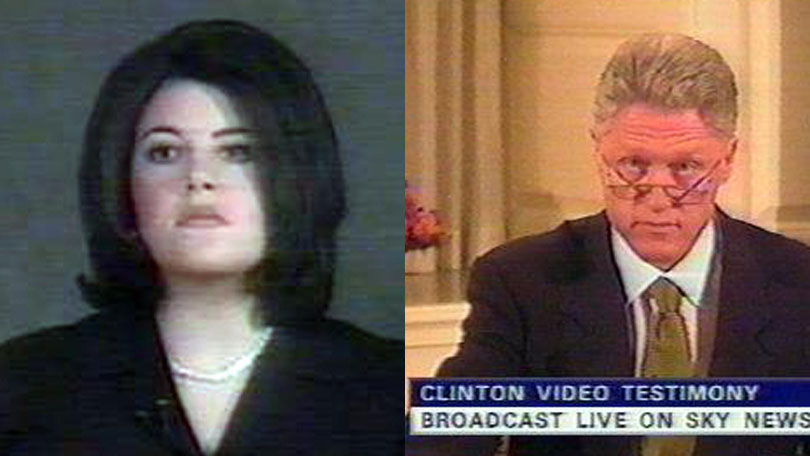 “I did not have sexual relations with that woman, Miss Lewinsky.”

It’s been 20 years since the start of the investigation into Bill Clinton that led to only the second presidential impeachment trial in America's history - and the first of the modern era (the last before that was in 1868).

The series plays out like an elaborate political thriller, incorporating sex, power, money, secrecy, lies and betrayal; just like House of Cards or Scandal, but this was all real-life.

The six-part series The Clinton Affair will air exclusively on History as a double bill every Saturday, starting on December 8 at 9pm.

[Read more: From The Clinton Affair to The Marvelous Mrs. Maisel, what to watch in December] 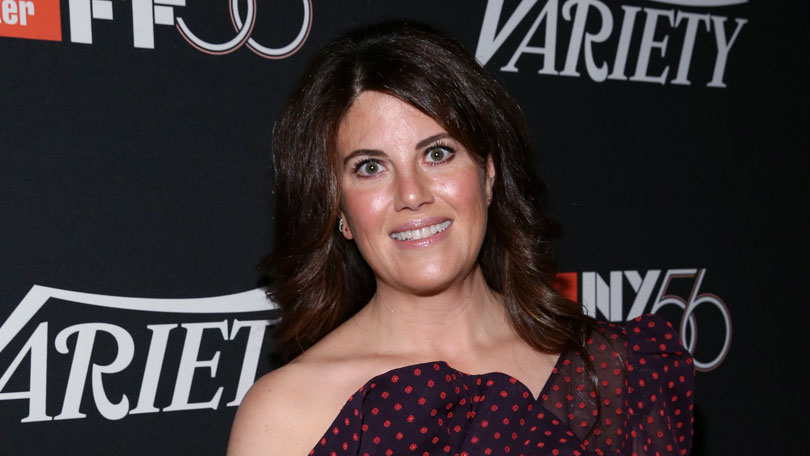 On screen contributors include:

The Clinton Affair doesn’t feature interviews with Bill or Hillary Clinton, nor whistleblower Linda Tripp - but that’s not for want of trying.

Speaking exclusively to BT TV, series director Blair Foster says that Linda Tripp’s absence is one her biggest disappointments from the making of the series.

She said she would have loved Tripp - who lifted the lid on Clinton and Lewinsky’s affair by secretly recording their phone calls - to have shared her side of the story.

“I spoke to Linda Tripp, I tried many times [to get her on board]. She in some ways is the biggest disappointment to me, because hearing from her directly would have gone a long way for people to understand why she did what she did.

“A lot of people who’ve seen the show don’t see [Tripp] in a positive light. She had the opportunity to directly talk about why she did what she did…. she’s talked publicly recently about it, about being a whistleblower, that this was something that was an inappropriate relationship, that she was trying to help Monica.

“I think even Monica herself said that it was an inappropriate relationship. It’s how she went about helping Monica that would have been interesting. I honestly don’t know why Tripp didn’t participate in the documentary.

“Our conversation was off-the-record so I can’t disclose the details but we had a very lengthy conversation. I know it’s something that she considered, and it wasn’t just a sort of a blanket “no”. But I honestly don’t know, I can’t speak to why.”

Of the Clintons, Foster approached them to participate, and is also disappointed by their absence, but hopes they tune in.

“You know, I do hope they watch it. We reached to all of them, obviously, and a number of people close to the Clintons did participate," she said

“We know they’re well aware of the series, so we were obviously disappointed they didn’t participate, but happy that people like David Kendall who’s the lawyer [who represented Bill Clinton in the impeachment trial], who remains their lawyer, and Sidney Blumenthal [former senior advisor to Bill Clinton] did.”

[Read more: Why everyone's talking about the controversial final season of House of Cards]

You'll love The Clinton Affair if you liked…

1. There’s an award-winning documentary team behind the lens 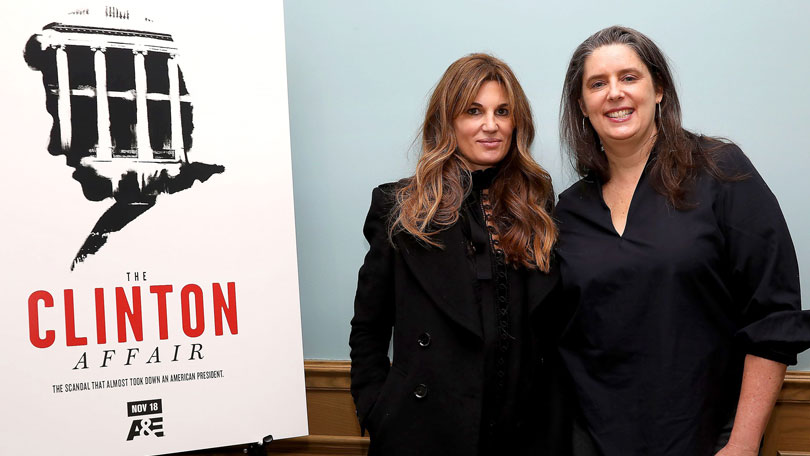 The six-part documentary series was directed by Blair Foster (above right), the Emmy-award winning documentary filmmaker behind George Harrison: Living in the Material World and Robin Williams: Come Inside My Mind.

It was executive produced by Academy Award winner Alex Gibney, who won an Oscar for the 2007 documentary Taxi to the Dark Side and has been nominated for a whopping 59 other awards for his documentary work.

It’s no coincidence that most of the production team on The Clinton Affair are women. In contrast, almost all the books written about the Clinton impeachment were written by men.

Lewinsky writes for Vanity Fair: “History [was] literally being written by men.

“In contrast, the docuseries not only includes more women’s voices, but embodies a woman’s gaze: two of the three main editors and four of the five executive producers are women.

“I may not like everything that has been put in the series or left out, but I like that the perspective is being shaped by women.”

The Clinton Affair director Blair Foster tols us that she didn’t want to just tell Lewinsky’s story: she wanted to tell the stories of all the women who either hadn’t been listened to, or had been silenced.

She told BT TV: “One thing that I really wanted in this series was for all women to tell their stories, to give them a fair hearing.” 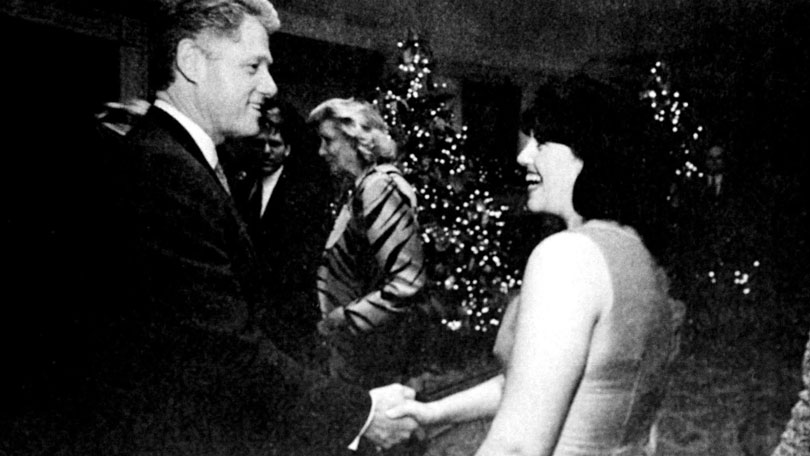 The Clinton Affair documentary series, and Lewinsky’s accompanying essays for Vanity Fair, have sparked new conversations around abuses of power within the #MeToo movement for gender equality.

Lewinsky’s return to the spotlight has drawn attention to abuses of power in the workplace, specifically high-profile bosses and more junior members of staff (as was with the case with Lewinsky, then White House intern, and President Clinton, who was then the most powerful man in the country).

“One of the most jarring takeaways of watching all six hours of this [series] is just how much harder the world was on Monica Lewinsky than it was on the President,” said NBC senior national correspondent Kate Snow on the TODAY show.

Megan Garber writes for The Atlantic that the show is a reminder of the “stubbornness of the status quo”, in that it’s the “woman who’s at fault”.

More than 20 years have passed since the scandal broke, but in the era of the #MeToo movement, the series is more important than ever, with Lewinsky emerging as a powerful spokesperson on power, consent, and gender equality, writes Anna North for Vox.com.

The conversations that have arisen around the Me Too movement since the series aired in the US were a coincidence, Foster told us, as they were already making the series when the allegations began to emerge.

“[Me Too] happened shortly after we began filming, we were already in production when it started. In fact we did three interviews with Monica and the first one was before or maybe just on the cusp [of Me Too]. I can’t remember exactly.

“It was very strange that it kind of played out while we were in production of the series. In fact, we were editing the last section of the film, the Juanita Broaddrick story, while the Brett Kavanaugh hearing [over sexual assault allegations] was going on. That was a very surreal moment.”

Off the conversations around abuse of power that have arisen since the show aired in the States, Foster told us: “I feel like it’s something in a small way that’s hopefully contributing to a lot of conversations we’re happening right now, so I’m very proud of that.”

3. It features exclusive interviews you haven’t seen before

The series has exclusive access to Monica Lewinsky, her family and her legal archive, disclosing shocking secrets about the scandal.

Lewinsky has remained largely tight-tipped for the past 20 years, stepping out of the spotlight following the scandal, and retreated from public life in the US to study in the UK.

Now, she argues, her voice should be heard. She wants the world to learn from her public shaming.

Why did she decide to get involved? She writes for Vanity Fair: “Throughout history, women have been traduced and silenced. Now, it’s our time to tell our own stories in our own words.”

Asked whether the mostly-female production crew on The Clinton Affair was a contributing factor in Lewinsky wanting to speak publicly on the programme, director Foster said: “Well to be honest, we weren’t on board yet when she came on board.

“She came on board knowing that Alex [Gibney] would be the executive producer, [but] she didn’t know who the director was going to be.

“Then I was brought on and two of our three editors were women as well, so that actually was not a factor in her deciding to do this.”

Instead, Foster tells BT TV that the fact the documentary was focusing on Clinton’s impeachment, rather than their affair, appealed to her.

“Monica was not looking to be in something that was just focusing on her," she explained.

“I think she thought that this was a historic moment [20 years since Bill Clinton’s impeachment], she was a part of it, she wanted to be part of a re-telling of it that was accurate and not sensationalised.”

History is one of the 60+ premium entertainment channels available for BT TV customers.