Women on the Verge: Why Dublin’s Sex and the City is your new must-watch comedy

If there is such a thing as comedy gold dust, Sharon Horgan must have a whole pot of it stashed away Her latest TV series, an adaptation of Lorna Martin's Women on the Verge, is further proof that she’s one of the greatest comedy writers of her generation.

What is Women on the Verge about?

The six-part series is based on the critically acclaimed memoirs and column of Lorna Martin, Women on the Verge of a Nervous Breakdown,

From terrible boyfriends, let-down ex-husbands and seedy bosses to drunken affairs in pub toilets and hangovers that mean you miss your Godchild’s christening, Women on the Verge is a riot.

Horgan guest stars as an enigmatic psychiatrist, who Laura turns to as her chaotic love life and career unravel in the most undignified manner.

As honest and frank a portrayal of romance, careers and the constant struggle for contentment as you’ll see in 2018, it’s been snappily tagged Dublin’s answer to Sex and the City.

[Read more: Meet the cast of Women on the Verge]

[Read more: All the great shows you can watch on W in 2018 and beyond]

Three reasons why everyone’s talking about Women on the Verge 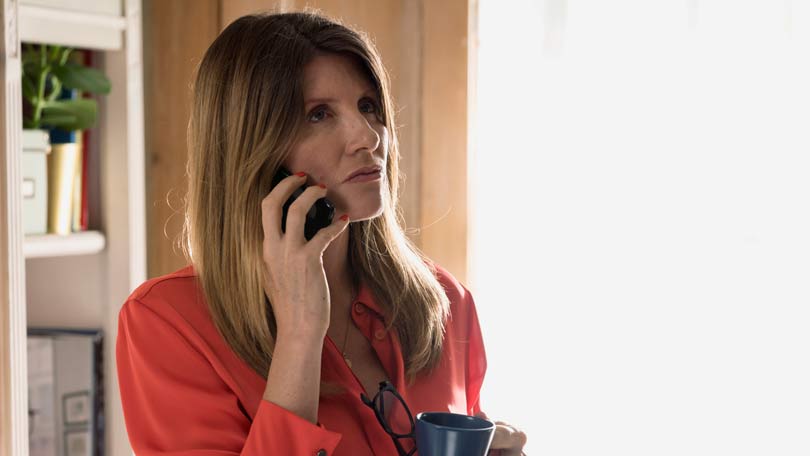 Emmett Scanlan’s story about how he landed the part of Laura’s narcissistic love interest and boss Kieran, explains the reverence that the cast and co-stars have for the writer and actress.

Horgan’s magic is her ability to pinpoint and extract the humour out of the most desperately tragic moments of self-loathing and personal misfortune. 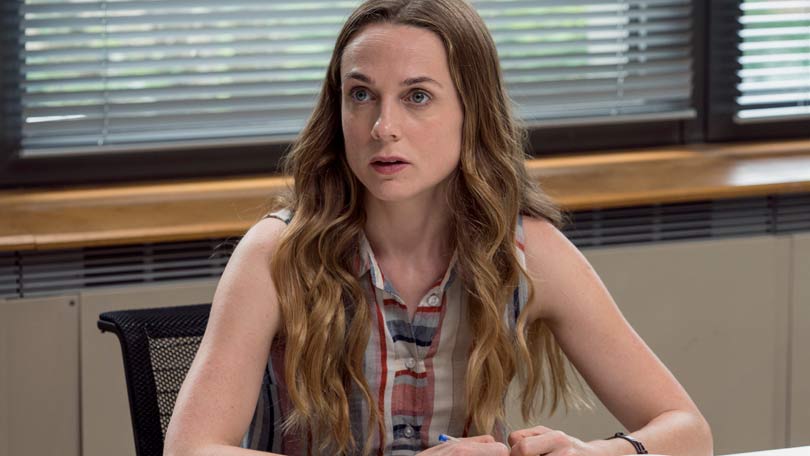 Although Women on the Verge has been compared to Sex and the City, the relationships in this show are much more brutal and realistic than the cocktails and fine dining of the Manhattan ladies.

Laura, Katie and Alison are undoubtedly great friends, but that doesn’t stop them being envious or critical of each other’s failings.

“It was quite important to me that was shown, and that they weren’t just like, ‘Oh, I love you for being you’, you know? I know there’s a conversation about not wanting to see women being bitchy or being competitive. But women are bitchy and competitive sometimes. I think to pretend otherwise is wrong.” 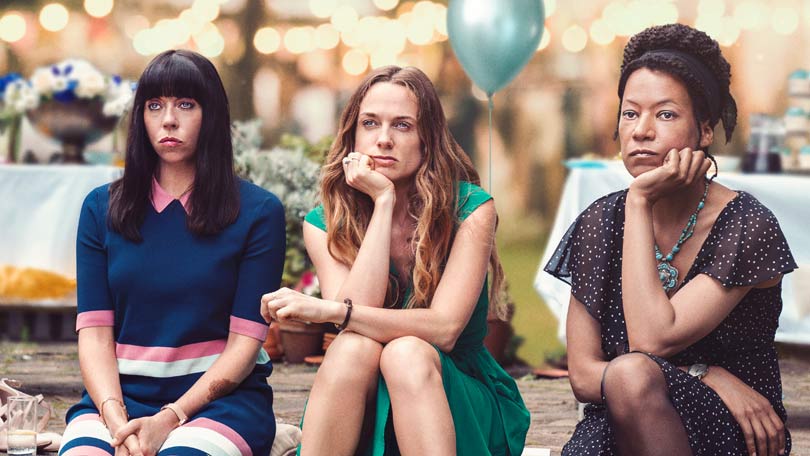 Horgan agrees, adding: “Viewers respond to seeing people having difficulties on screen because it makes them feel it’s okay, like, ‘maybe I’m not the only one’. Occasionally it’s nice to escape into an aspirational world but a lot of the time if you’re telling a story that’s really honest and really relatable then I kind of think, why wouldn’t you want to see that?”

This realistic portrayal of friendships and love lives in 2018 is what makes the show distinct from blander, generic drams about young singletons.

“To actually be a bit rubbish at stuff. To have that on TV and to know that it does sell, and that other women – and men – are happy to watch it, and go, ‘Yes, it’s funny and reflects us’ is great. Because it doesn’t just reflect women, it reflects men too, you know? That we, as human beings, **** up.”

Emmett Scanlan is a scream as the despicable adulterer Kieran and Horgan’s Catastrophe co-star Aaron Mccusker is perfectly cast as Alison’s bumbling ex Martin, who appears as surprised as anyone by his Casanova-like abilities during a break in their relationship.

The contrasting male characters – a narcissist and a naïve blunderer – bring extra layers of humour to the series.

Laura pines for something she can’t have with the sleazy and heartless Kieran, while Alison appears to begrudging at having to settle for the puppy dog-like Martin. The reality that life won’t deliver everything we’ve been told we’ll get growing up is at the heart of WOTV and the fact that these characters can’t see the glaringly obvious mistakes right in front of their faces is painfully on the money.

Meet the cast and characters 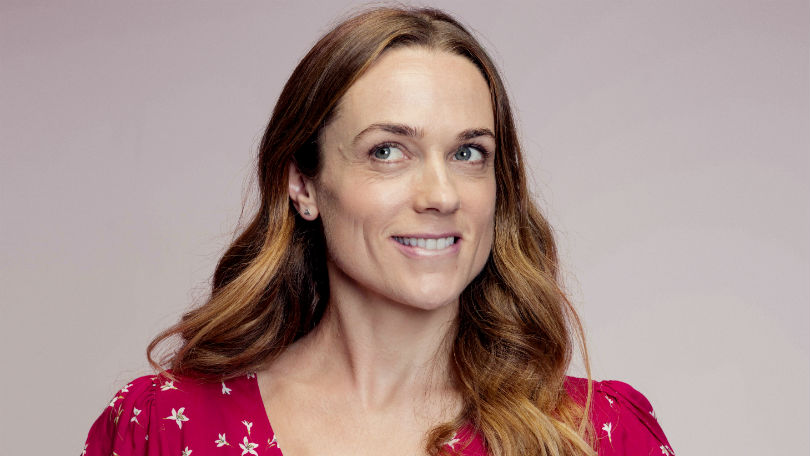 “My character isn’t in a relationship and has no responsibilities and only has to take care of herself. I suppose she’s a bit lost, really. She’s trying hard at her career but it’s just a bit mediocre, and I’m not even sure if it’s something that she’s that great at anyway because she hasn’t got a lot of self-esteem.

“Then she’s picking the wrong kind of guys as well. Again, with the whole self-esteem thing, being happy with the s***iest treatment. But she doesn’t find nice guys attractive. Because of her lack of responsibilities, she can go out drinking and behave however she wants and be self-destructive and subsequently really lonely. Her friends have children or are thinking of having children but there’s no sense of that with Laura. That’s miles away for her. She’d just like a boyfriend or a promotion.” 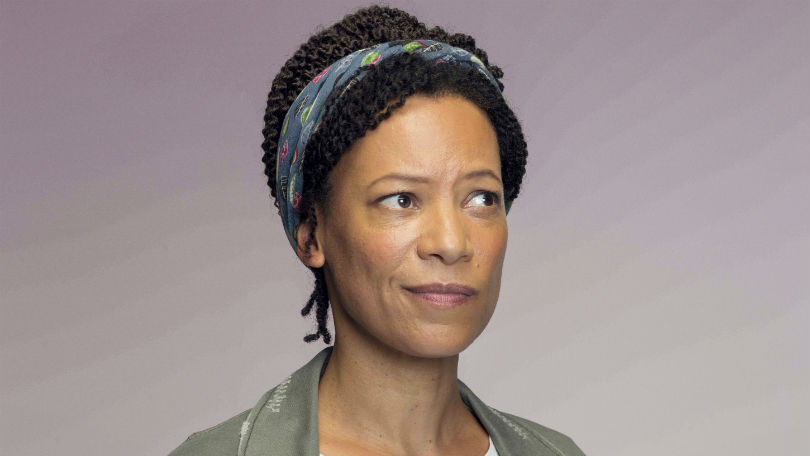 “You meet Katie when she is about to make a really massive decision, which she completely backtracks on. And then you spend the rest of the series finding out why that occurs, I suppose. She was a bit of a free spirit, arty, photographer who settled down very early on, had a baby and then very quickly went, “Oh no, that was the wrong thing to do, because I don’t actually love this person.”
“For the sake of her little girl Ella, they divorced, and she’s doing her best to be a good mum in a situation that she probably wouldn’t have chosen, if she’s brutally honest. So, she’s trying just not to repeat patterns, but she is repeating them, because that’s the nature of people, people do that. And does she need a man, want a man? Possibly not, but she still makes the same mistakes that we all make, even though she should probably know better.” 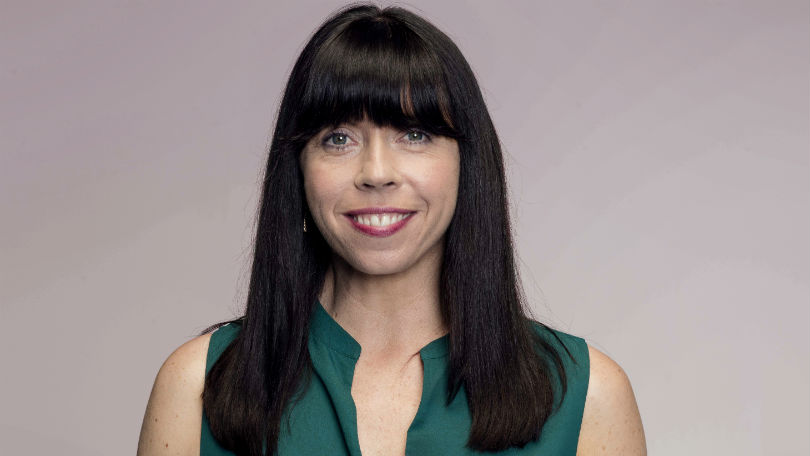 “Alison is hitting a point where she’s ready to settle down, and she wants the package. She wants the fella, she wants the wedding, she wants the baby, she wants everything in place. She’s got a reliable enough job, it’s not thrilling, and I think that is in itself telling of the relationship that she’s looking for too – she just wants a reliable relationship, it doesn’t have to be thrilling.
“I’ve just got to tick boxes, get my uterus full, and that’s fine. And then I suppose over the course of it she realises that you can’t just tick boxes, sometimes it’s more complicated than you think. Throughout the series you see her fella’s family and you see her friends, but you don’t see her family. You see her desperately trying to make her own family.”

How to watch Women on the Verge on BT TV

Got BT TV? Catch up on the latest episodes on the BT Player >