From a secret pregnancy to Britain’s Sexiest Legs, here are some surprising facts about the all-singing, all-dancing talent show judge.

Alesha Dixon may have started her career in the music industry as a member of Mis-Teeq but she has easily segued into the world of TV talent shows – first as a contestant and then as a judge.

In 2012, Alesha switched reality shows – and TV channels – to become a part of the judging panel for Britain’s Got Talent, which returns for its 11th series this year.

Alesha’s career has spanned many genres  - from member of a pop group, to solo artist and from reality TV competitor to reality TV judge but, if fame hadn’t come knocking, she’d probably have been something rather different: a PE teacher.

She excelled at sport at school, so it seemed like a natural career choice: “I was really good at sports and pretty bossy - the perfect combination. I even did a diploma in sports studies,” she revealed.

Alesha has also revealed that, at the time, her father would have preferred that she become “an accountant or stockbroker” than start a career in music.

Fresh off her success on Strictly – a show that’s known for honing one’s pins – Alesha won the gong in 2009, defeating fellow Simon Cowell protégé Cheryl in the process.

Alesha’s fellow BGT judge David Walliams is a well-known children’s author of such works as The Boy in the Dress, Mr Stink and Billionaire Boy. Alesha looks set to follow suit, as she has recently signed a deal to write two books for children.

The heroine of the books will be Aurora Beam – a young superhero. Alesha has said that she wants to “create a strong female character who young girls and boys can hopefully be inspired by and look up to”. 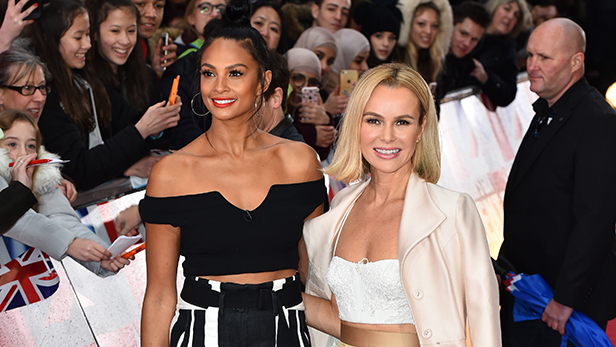 Alesha has a three-year-old daughter called Azura with partner Azuka Ononye. However, Alesha recently revealed that she kept her pregnancy a secret from everyone except her partner and her mum for six months.

The reason? The public embarrassment she had suffered when her previous marriage – to MC Harvey from So Solid Crew – broke down after his infidelity.

“When you’re in a high-profile relationship and you break up it’s embarrassing,” said Alesha.

“I didn’t tell anyone else in the family. No one at Britain’s Got Talent knew – although they must have suspected because my dresses had to be altered every week.”

One person who did guess was Alesha’s fellow BGT judge Amanda Holden. “I remember her giving me a present – a little outfit – with a note saying, ‘If I’m wrong, forget about this’ but she wasn’t. She was right.”

Charity is a big part of Alesha’s life. She referred to charitable works as “a moral responsibility” for celebrities.

Alesha is a patron of the African-Caribbean Leukaemia Trust. She also climbed Mount Kilimanjaro in Tanzania for Comic Relief, saying: “It was the hardest thing I’ve done in my life so far.”

As a vegetarian, Alesha supports many animal rights charities. She even once travelled to Romania to free two brown bears from a zoo.

Alesha was born in Welwyn Garden City in Hertfordshire. She comes from a large family and has six half-siblings.

As well as judging roles on both Strictly and BGT, Alesha has moved into TV presenting in its own right. Her first steps were as an awards show host – for example for the Mobos and Mr World. From there she moved into presenting the short-lived ITV reality show Your Face Sounds Familiar which, like a star-studded version of Stars in Their Eyes, featured celebrities portraying iconic singers in an attempt to win £10,000 for charity.