Dark Heart – Where is it filmed?

There’s a chance you could have been a passing extra in ITV's new midweek drama series without realising it.

New drama Dark Heart is set to draw in crime fans to ITV when it launches on Halloween.

The series has an atmospheric, gritty feel to it that is perfect for its tales of gruesome and unusual murders investigated by a troubled cop.

[Read more: Tom Riley on upping the game in the TV golden age]

Find out more about where the series is set, and where the team visited.

Where is Dark Heart set? 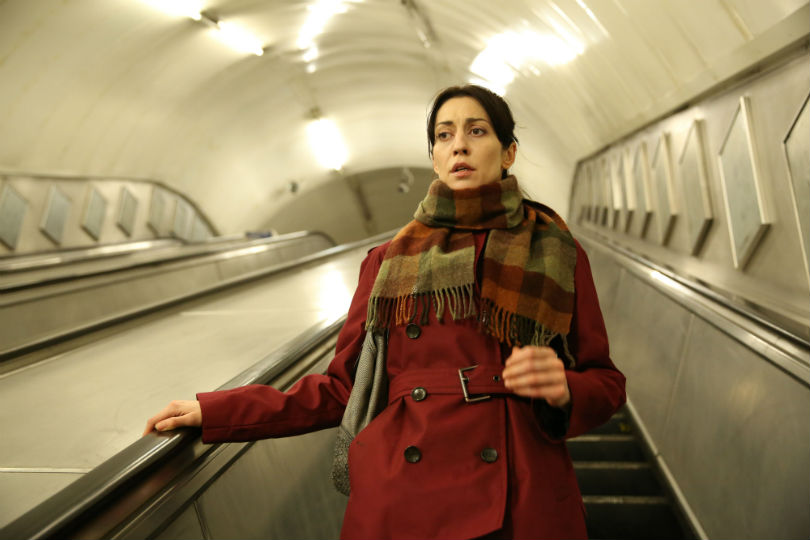 Dark Heart is based on the Adam Creed novels about DI Will Wagstaffe, a tortured soul who joined the police force to avenge his parents’ murders.

Like the books, the series is set in London, and spans a range of glamorous and gritty locations to show all sides to the city.

You may recognise some of the areas that the drama takes in – the first case sees Will about to jet off from London City Airport when he is informed of a murder; the second involves a murder victim on the London Underground; and the third finds a body in an East London church.

[Read more: All you need to know about Informer]

Where was the series filmed? 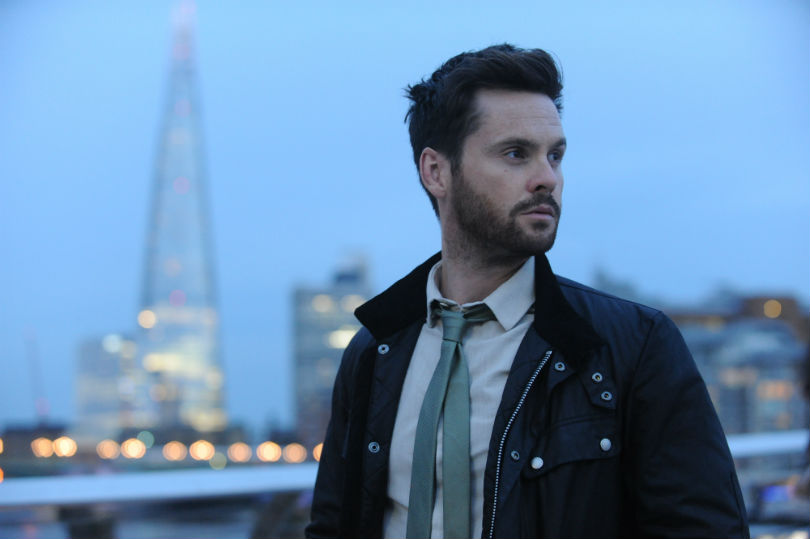 What better setting for a gritty crime drama than our capital city, London?

Everyone loves a Scandi-noir, but you can’t beat the winding alleyways, dark, historic buildings, and concrete estates of London for a moody backdrop to a gripping tale of murder and corruption.

The Dark Heart cast and crew are rightly proud of the way that they embraced the city’s dark and grim side. 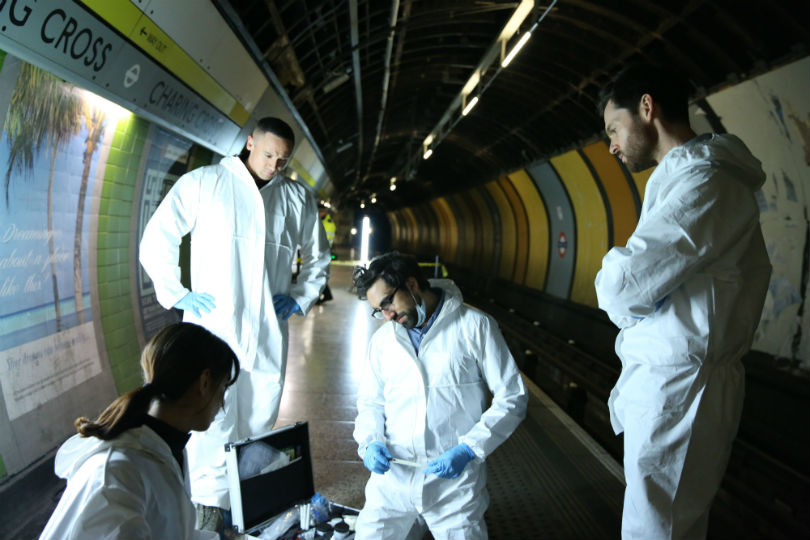 Star Tom Riley, who plays DI Will Wagstaffe, said: “In the age of prestige TV it’s also very important to make yourself look and feel as expensive, classy and different than the average run-of-the-mill dramas.

“We’ve invested a lot of time and effort into interesting locations and shots, shooting guerilla-style in London.”

However, he said that the shoot wasn’t without its challenges: “You put your make up and costume on in the morning and then you cannot return to base because you’re a 25-minute drive away and there’s no time. You’re literally changing in a pub toilet and rushing to another location.”

How was Dark Heart secretly filmed? 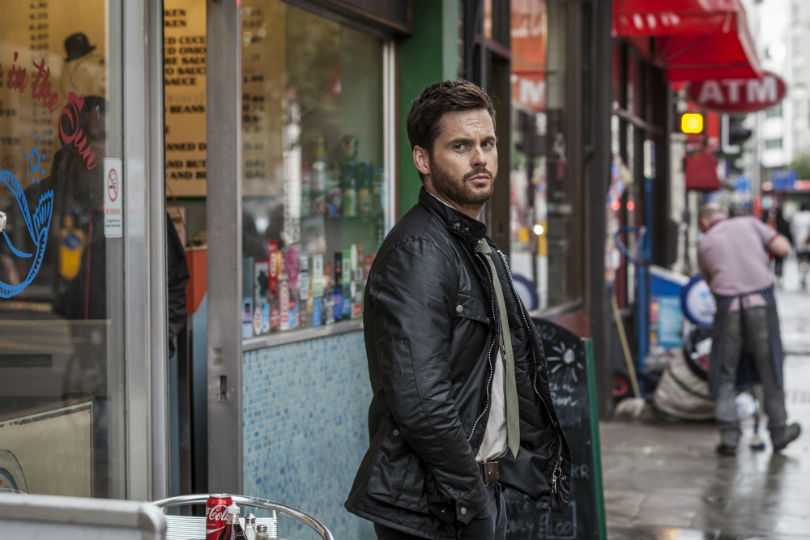 The street scenes in Dark Heart should feel a little more realistic than your average police drama, as much of the time cameras were focusing in on the actors from hidden locations.

As a result, it should have looked as though the stars were just normal members of the public going about their lives and jobs.

Tom said: “We shot on the sly in places you normally wouldn’t see without the general public waving at the camera. It does make for great locations on TV but it’s hard on the crew.

“We also filmed a lot at night but it does all come together and hopefully we’ve made something original, new and fresh.” 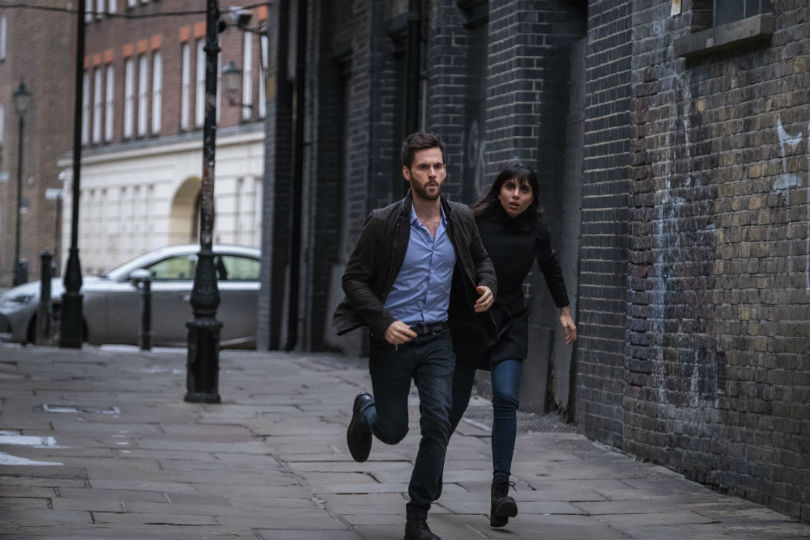 Of course, the filming style means that if you happened to be in London while the shoot was taking place, you could spot yourself in the background of a scene.

Miranda Raison, who plays Will’s girlfriend Sylvie, said: “Most people don’t take any notice when you’re filming in London. We filmed in a beautiful little pub in Holborn at 8am for a scene where Sylvie meets a client called Jim Duggan, played by Paul Kaye.

“There were all the supporting artistes outside with their alcoholic drinks - actually mostly warm grape juice - dressed in work gear as it was meant to be early evening post-office drink time, all while the cameras were hidden from view.

“Nobody passing by batted an eyelid at that. If anything, people looked quite longingly wanting to go in the pub for their 8am drink. I found that quite funny. People walking past not even noticing the 8am gin and tonic. That would only happen in a metropolis.”

In the dead of night, a young nurse, Sofie Cerna is discovered on the platform of a London tube station. DI Will Wagstaffe is called to the chilling scene. With no evidence of a physical struggle, Staffe looks to pathologist Dr Luke Paul for answers.

First impressions are of death by asphyxiation. But sinister still are the remarkable similarities between the condition of the victim’s body and those killed by Sarin gas.
When CCTV shows Sofie fleeing an invisible assailant the team wonder whether this is the product of a drug induced hallucination.

Staffe and DS Josie Chancellor visit Sofie’s sister Kat and young daughter Holly who are utterly devastated by the news. Sofie was a devoted mother and hardworking immigrant battling to survive in a tough economic climate. But the discovery of a large sum of cash hidden in Sofie’s room adds weight to Staffe’s suspicions that there are greater forces at play.

Little do they know that across town another young immigrant prepares for a mysterious encounter.

With the team pulling resources to track Sofie’s last movements, Staffe looks to the hospital and those within it. Before long, Sofie’s friend Smita confides that she caught Sofie stealing prescription medication.

Back at Leadengate, as Staffe contemplates what Sofie was doing with the stolen opiates, a rattle at Sofie’s front door wakes little Holly. As she creeps downstairs hoping to find her mother returning from work a hand reaches through the letterbox towards the door handle. Holly’s chilling scream rings out across the estate.

DS Rob Mullen is first to attend the break-in, the intruder was clearly spooked and fled the scene. But a forensic sweep of Sofie’s flat throws up traces of blood from an unidentified person.

At the mortuary, Dr Luke Paul confirms cause of death and gives a definite ID of the murder weapon.

Just as he makes a professional breakthrough, Staffe receives a personal blow which involves his nephew Harry.

Staffe knows a bigger problem is at play and when he probes Harry further, he discovers a dark secret, Staffe knows he has no option but to take action.

Meanwhile, Chancellor puts in a late shift at the station, and unearths the identity of the man whose DNA was found in Sofie Cerna’s flat. Adam Miller (18) is currently a missing person, presumed dead.

Before long, hospital CCTV throws up a new suspect. Top surgeon Nick Kyriacou insists that his relationship with Sofie was platonic. Staffe is forced to believe him for the moment.

Aided by his new team DS Rob Mullan, DC Ray Monk, DC Annie Webb and pathologist Dr Luke Paul, Staffe unpicks a bond of secrets and betrayals in pursuit of justice for the victims and their families.

So, as I started to write this foreword, I went back over my diaries to check when I first started working on the show, and discovered that by the time we TX, it will be just under eight and a half years since I took my first meeting on the project. Which says something.

Obviously, it says this industry is slightly nuts, it says you have to have the hide of a rhino to survive it, but most importantly it says (to me at least) that there was always something about this idea, this collection of characters, this world, that was going to ensure it got made, no matter how long it took.

In a funny sort of way, the genesis of the series reflects something of the character of William Wagstaffe, a man who has suffered more than his fair share of slings and arrows, but who tries hard not to be beaten or defined by that (with varying degrees of success). And perhaps this is what attracted me to him in the first place.

The book on which the opening film is based, ‘Suffer the Children, spoke to me for all the above reasons, but also, because as a study of the long term effects of sudden and brutal loss (in Staffe’s case, the murder of both his parents when he was a 16) it was incredibly potent to me, having only three years previously lost my young wife.

This was something I felt I could, and indeed wanted, to write about. Alongside this I wanted to examine notions of morality, revenge,
forgiveness and justice within the police world Staffe works in, whilst at the same time having access to his personal life in a way that is perhaps unusual in a procedural – we spend a lot of time with Staffe as home because I wanted to try to understand both parts of the man.

I could not be more delighted with the team we assembled to make the show, starting of course, with the incredibly talented Mr Riley,
who invests Staffe with an energy, wit, intelligence and edge, that feels very unique. Alongside him, we were very lucky to snag Anjli
Mohindra, Charlotte Riley and Miranda Raison, who are all also out of the very toppest of top drawers.

Colin Teague, our director has helped draw out some stunning performances from both cast, and indeed our beautiful city – a
noirish London that has never looked more sultry or more dangerous, a city of contrasts, old and new, love and loss, good and evil, a Dark Heart.

So it might it might have taken eight and a half years, but for me at least, it was well worth the wait.