Acerbic wit is the number-one job requirement for the UK’s Eurovision commentator. Here are his finest quips since he took the mic in 2009.

The late Sir Terry Wogan set the tone for poking fun at Eurovision Song Contest acts during his 28 years commentating for the UK, and Graham Norton has carried the baton as his replacement since 2009.

Viewers look forward every year to the hilariously cutting comments that comedian Graham has to offer and we’re sure that 2018 will be no exception.

Take a look back at some of Graham’s funniest critiques over the years.

“The bad news is, you’re about to watch Albania. She’s only 17, so please bear that in mind. Where was her mother? Why didn’t she step in and say no?”

"That was song eight. That song wasn't longer than the other songs. It just felt longer."

"It's an unusual Eurovision this year in that there's a lot of songs that are really quite good and brilliantly sung. The next song is not one of those."

"She can do extraordinary things with her voice, not pleasant things, but extraordinary. If you've got dogs or small children in the room, you might want to put them out of earshot."

"Good news for the Irish economy. I can reveal they have discovered oil there! Sadly it's baby oil and further bad news, they've used all of it on their dancers."

"This is actually quite a good song but you may not notice, because you'll be distracted by the... well, let's call them dancers. At points you might think they've had a bad oyster, but truly it's choreographed."

"Maybe I'm just old and grumpy but there isn't a single thing about this woman that doesn't annoy me. Here's Jamie-Lee, making Bjork seem great."

"If it doesn't work out for him, he's always got his Hotel Management degree. I feel he's going to use it." 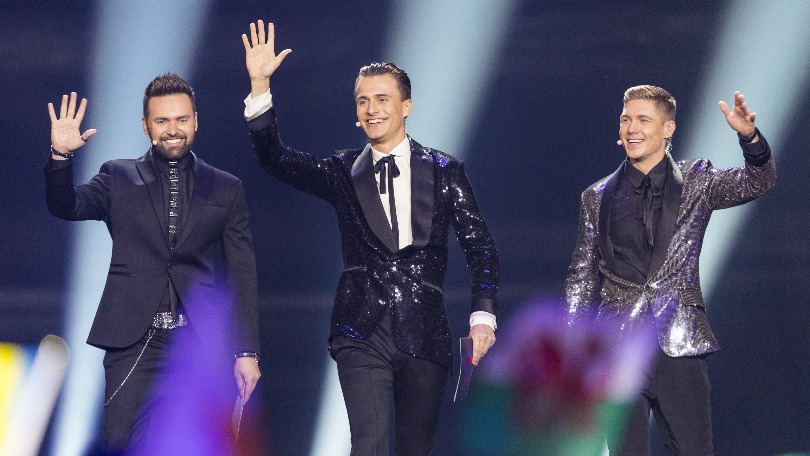 "Ooh, some dodgy notes in there. I wonder if there's something going wrong technically. Or maybe, he's not great."

"Oh, and in case you are wondering, there hasn't been a stage invader. She is a fully trained dancer. She is meant to be there."

As the couple declared their love to each other through song on stage: "I give it a month."

He wasn't too far wrong, as Alfred and Amaia split up around six months later.

The Eurovision Song Contest Grand Final takes place on Saturday, May 18 at 8pm on BBC One.